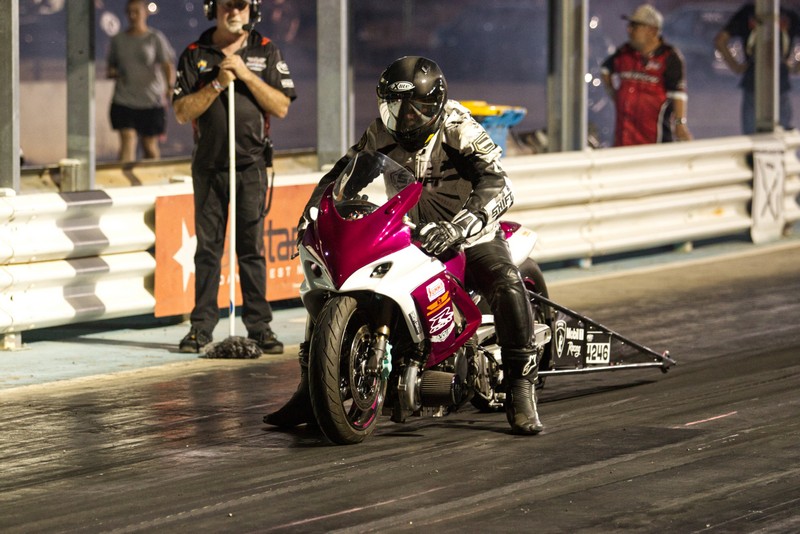 Amongst the 13 national title chases that will be decided next weekend, the Competition Bike and Modified Bike battles will provide plenty of two-wheeled thrills at the event, which will also host round three of the Burson Auto Parts Australian Top Fuel Championship.

In Competition Bike, Phill Paton is leading the way on 250 points, ahead of fellow West Aussies Ross Smith (200 points) and Gordon Crawford (155), although Smith is not eligible for the title having not competed outside of his local division.

Paton made his comeback to racing after two years away at the 2021 Goldenstates, setting two new national records at that event before securing the runner-up result and another ET and MPH record at the 2022 Westernationals.

Most recently, he travelled to Mildura for the Twilight Nationals, clean sweeping that event by securing the Decoglaze Glass Splashbacks Top Qualifying Medallion, the winning ANDRA Christmas Tree trophy, and another two national records to place himself in the title box seat ahead of the finale.

“It was a bit of a last-minute decision to go across to Mildura. I hadn’t intended to go over originally but Gordon Crawford was quite keen for us to go, so we made the decision and had a few hours to get the trailer loaded up to head across,” Paton said.

“For such a last-minute decision, it couldn’t have gone much better! In the beginning of the event, I turned the power down on the bike as I wanted to make sure we could get down the track, but the track was on point, everything went really well, and I was running great numbers right from the start.

“I am very happy with how things went, the bike ran flawlessly and fast right from the beginning, so that certainly fills me with a bit of confidence that I can do well at the ANDRA Grand Final.

“If we can take out the title it will certainly be nice. All I need to do is put in a solid performance and that will tie it up, and I am pleased that we are in with a chance,” he concluded, while thanking Brett Ghedina of Pace Motorsport, Niall at Straightline2Ten Panel & Paint, Mobil1 and Statewide Oil Distributors, Darrin Macdonald, Gordon Crawford, Mick Hollister, his wife Vicki and son Chris for their support.

For defending Summit Racing Equipment Sportsman Series Modified Bike Champion Shane Walker, while he is in contention the title is far from a done deal with the Victorian expecting plenty of competition in Perth.

“It would mean an awful lot to us if we could defend the title, and especially if we can go back-to-back. That would certainly put us amongst some pretty elite company and would be just awesome,” Walker said.

“With a big field at the ANDRA Grand Finals, the competition is going to be through the roof at this event and I need to go at least two rounds to secure the points I need to lock down the title! With so many good racers, it is certainly not going to be easy, but we will be doing all that we can to get it done of course.

“It has been such a tricky season with the impacts of COVID-19 and border closures, I really hope we can finish up on a high and look forward to the next season which hopefully will see us all getting back to some normality!” he added, while thanking his wife Monika, Gordon Crawford, Craig Geddes, Mark Hunt, Penrite, Allwraps, Jordon’s Speed and Customs, Burson Auto Parts, Motor Lights Australia and Peter Stevens Motorcycles Geelong for their assistance and support.