Top Doorslammer Are Moving Up At Nitro Up North

Top Doorslammer Are Moving Up At Nitro Up North 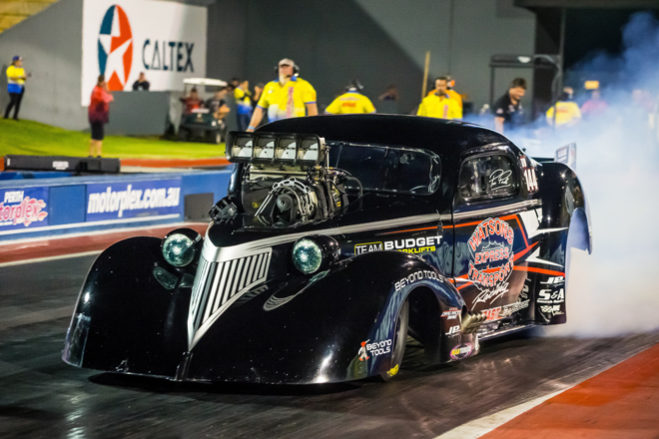 There’s an early leader in the race for entries at Nitro Up North on July 21 and 22 – and it’s the crowd-pleasing Top Doorslammers!…

There’s an early leader in the race for entries at Nitro Up North on July 21 and 22 – and it’s the crowd-pleasing Top Doorslammers!

Despite there being over two months until the event, eight cars have already nominated and the number is expected to climb before race day as teams get excited for the greatest adventure in drag racing.

Western Australia’s Pino Priolo is one of the early nominees. The driver of the crowd-pleasing 37 Chev said the atmosphere of Darwin’s Hidden Valley Drag Strip is unlike anywhere else in the country – and that’s a major reason why he has been back four times to compete.

“You know, it’s more like the old days of drag racing,” he said. “People are laid back on the hill, everyone is relaxed. And it’s a beautiful facility. We get to use the Supercars garages, the track staff are absolutely brilliant and they can’t do enough to help us.

“The Northern Territory Government get behind this event which is an amazing thing, they absolutely pack the place out and put on a great show.”

Priolo will be racing at both Darwin and the Alice Springs championship round a week afterwards, and while he can’t stay between the two events due to business commitments, his crew will. So while the boss is away, the boys will play!

“I’ll leave them up there and I’m sure they will find the time to go fishing and enjoy the Northern Territory,” he said.

Priolo has the help of NT Hauliers to get the car to and from the event, just another example of the friendliness of the Darwin community.

“I met Bruce and Amanda from NT Hauliers at the race track,” he explained. “They loved the car, came up to me and had a chat and we hit it off. I was able to sit Amanda in the car in the pits while we warmed it up, that was pretty exciting for her. She had the biggest smile on her face.

“Everyone there is so friendly. How can you not want to go back?”