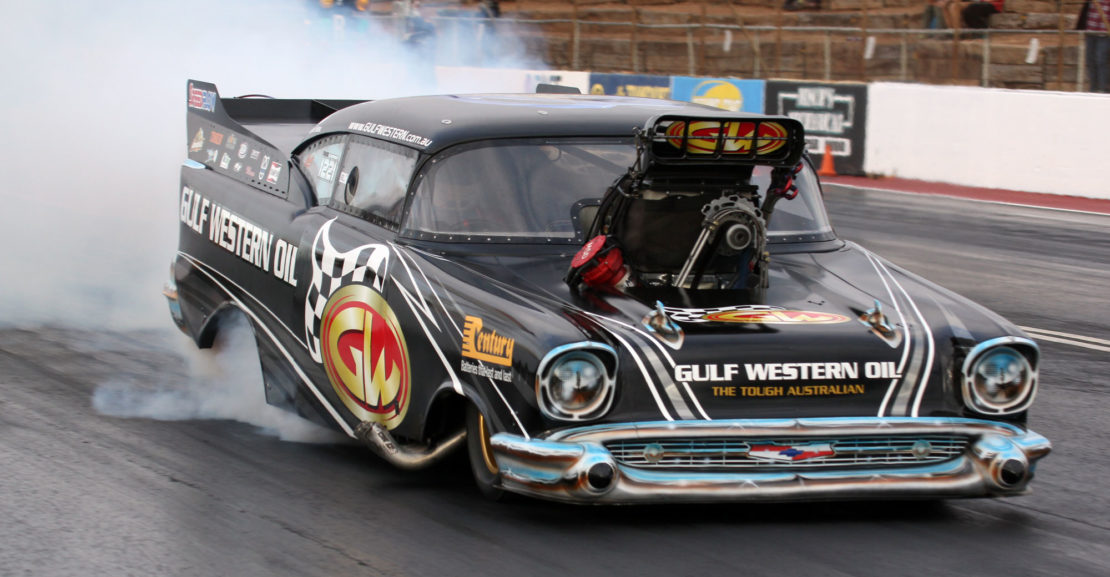 The Gulf Western Oil-supported Team Bray Racing was one-half of a gargantuan Top Doorslammer finale at the weekend, with team principal and legend Victor Bray taking on John Zappia.…

The Gulf Western Oil-supported Team Bray Racing was one-half of a gargantuan Top Doorslammer finale at the weekend, with team principal and legend Victor Bray taking on John Zappia.

Victor Bray and Zappia have been arguably the biggest names and rivals in Top Doorslammer for the last three decades, and their match-up for the final round of the Summit Racing Equipment Grand Final event at Adelaide International Raceway was a popular one.

Victor took the early lead in the run, but it would be Zappia who took the win after a side-by-side battle over the 1000 foot distance with Victor recording his best ET of the event.

Despite not taking the event victory, Team Bray Racing was treated as if they did.

“We are always blown away by the support of the fans and this weekend was no different, Adelaide really turned it on for us,” Victor Bray said, who was the fourth quickest qualifier for the event despite a minor parts failure in Q2 and no Q3 being held for the field.

“The Team Bray Racing pits were busy all weekend and especially before and after the finale, even though I couldn’t take out the final round we felt like we had with all of the support we received. We truly are lucky to have such great fans behind us.”

For Victor’s son Ben Bray, it wasn’t quite as successful a night in the Doorslammer ranks.

“Qualifying was tough for us with an electrical gremlin shutting the car down early into our Q2 run, but we were able to qualify third in my Gulf Western Oil ‘Slammer thanks to our efforts in Q1,” explained Ben Bray.

“From there, it was on to round one of eliminations against Rob Taylor, and unfortunately a technical hitch saw him take the win.

“Thankfully dad had a better opening round – laying down the power all the way to the 1000 foot to take the win over Paul Cannuli before receiving a bye run in the semi-finals before facing Zap in the finals.

“While he didn’t take out the event win, it was a mammoth final race and one that had everyone on-track enthralled.”

From Adelaide, the Team Bray Racing truck now heads to Melbourne for the Australian Automotive Aftermarket Expo – being held at the Melbourne Convention and Exhibition Centre across April 6-8. The AAA Expo is the nation’s most comprehensive exhibition of vehicle repair and servicing equipment, replacement parts, tools and accessories. Returning to Melbourne in 2017, industry experts will update business on the latest technologies available and the new trends in workshop management. Hosted every two years by the Australian Automotive Aftermarket Association (AAAA), the Expo is directed by a committee of executives representing key brands exhibiting at the Expo.