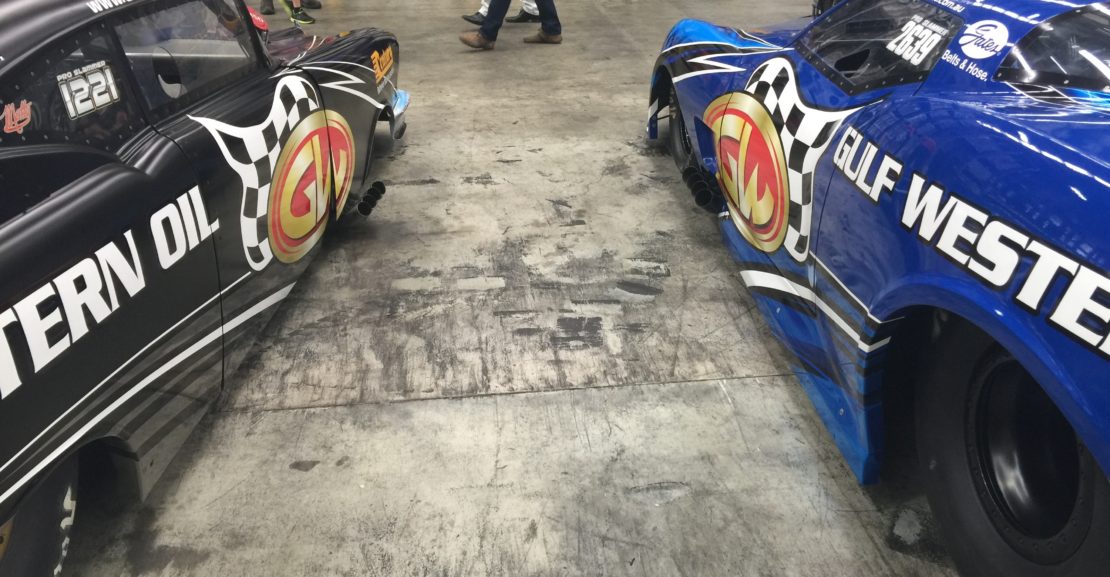 Calder Park drag racing fans are in for a treat at this weekend. This will be the first appearance in Melbourne for Team Bray’s new Gulf Western Oil sponsorship.…

Calder Park drag racing fans are in for a treat at this weekend. This will be the first appearance in Melbourne for Team Bray’s new Gulf Western Oil sponsorship.

It was only Last December Victor and Ben Bray celebrated in style with a huge launch in the Gulf Western Oil factory in Mt Druitt, NSW.

Ben Bray defeated his father Victor Bray in their last outing and now heads to an event, which has been happy hunting ground for the 32 year old in the past. At the same time, the venue has its own memories for Victor, who is keen to snatch back the bragging rights after his recent finals appearance against his son.

In 2002, the Australian Nationals event played host to Ben’s break-through as the youngest ever Top Doorslammer bracket event winner at 17 years and 2 months, with this record still standing today. From that point, he then went on to win three of the next four outings to claim the 2003 season title to be the youngest-ever winner of a professional drag racing championship anywhere in the world – another record which still stands today for the now three-time national champion.

This weekend’s venue is also memorable for six-time champ Victor – but not quite for the same successful reasons. In February of 1992 the Victorian facility saw Victor travelling down the track ‘vertical’ with his rear bumper scraping across the ground when an injection of additional power by crew chief Mick Atholwood didn’t quite go to plan.

“The Australian Nationals event is certainly a special event for myself and Team Bray as it was the host of some pretty important successes for us when I was only 17,” explained Ben Bray.

“I am pretty excited to head to Calder too, it is a cool place and I can’t wait to see what the Gulf Western Oil Team Bray outfit can do this weekend alongside all of the other competitors.

“It should be a great event, and with dad pretty keen to snatch back the bragging rights after I beat him last weekend, I have a feeling things are going to get pretty interesting!”

Victor quickly agreed with Ben’s prediction, while hoping for a more successful outing than his 1992 experience.

“I really want to give our new naming rights sponsor Gulf Western Oil a memorable event at Calder Park Raceway – but certainly not the kind of memories I walked away with in 1992!” laughed Victor.

“This is only our third event since making a comeback as a five-car campaign fully supported by Gulf Western Oil, and in our second event we were able to put on an all-Bray finale with Benny taking out the honours.

“Hopefully, we can do it again this weekend – although this time, as much as I like to see Benny win, I want to be the one with the bragging rights!” he laughed.

Ben and Victor will be part of a full eight car field for the Top Doorslammer category at the 51st ANDRA Australian Nationals, which kicks off on January 28 and concludes on January 29. For full event information, please visit www.calderparkdragracing.com.au/index.php/events/339-australian-nationals-2017