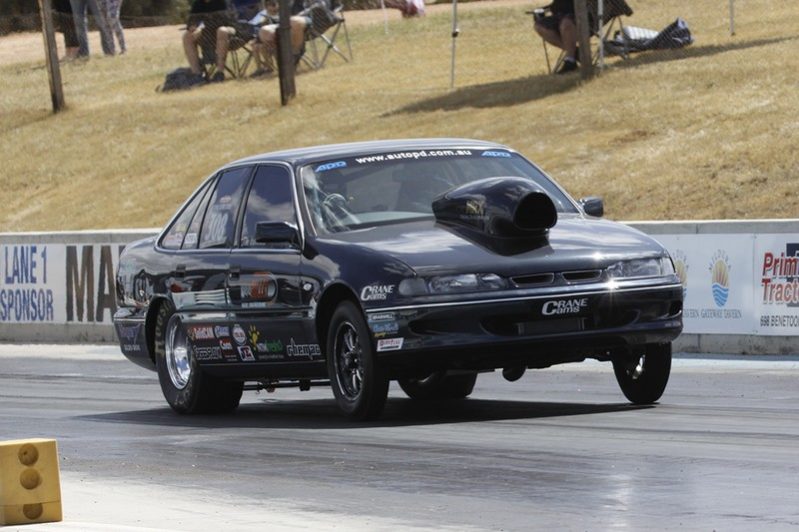 After an exceptionally windy start to the weekend saw an altered schedule for today’s running, the Sunset Strip Nationals – round three of the Summit Racing Equipment Sportsman Series – has concluded in style at Mildura’s Sunset Strip this afternoon. Jim Ioannidis (SuperComp), Graeme Cooper…

Runners-up were Tom Dimitropoulos (SuperComp), Michael Bridges (DENSO Super Street), Joe Bresciano (Super Sedan), Roy Romeo (Super Gas), Dan Dycer (Modified Bike), Greg Damiani (Top Sportsman), Stewart Johnston (Modified), Holly Camilleri (Summit Racing Equipment Junior Dragster) and Jason Keily (Supercharged Outlaws). For full results from today’s racing, please click here. The next round of the Summit Racing Equipment Sportsman Series, the Spring Nationals, will be held at Adelaide International Raceway on October 14. After having earlier earned the SuperComp Top Qualifiers Medallion – sponsored by The Tile Co-The Shower People, KC Tools and Summit Racing – Ioannidis and his VS Commodore Sedan had a bye in the first round before dispatching Robert Dekert in the semis. Dimitropoulos meanwhile faced Mark Newman and Craig Geddes (semis) on his way to his last race of the weekend. “I am stoked with the result – we have put in the hard yards and we have been rewarded,” Ioannidis said.“We have a fast car and we are utilising it now. We are becoming a good little well-oiled machine.“Today unfolded really well. We had a game plan, we stuck to it and we ticked all the boxes. It unfolded exactly how we wanted it to.” 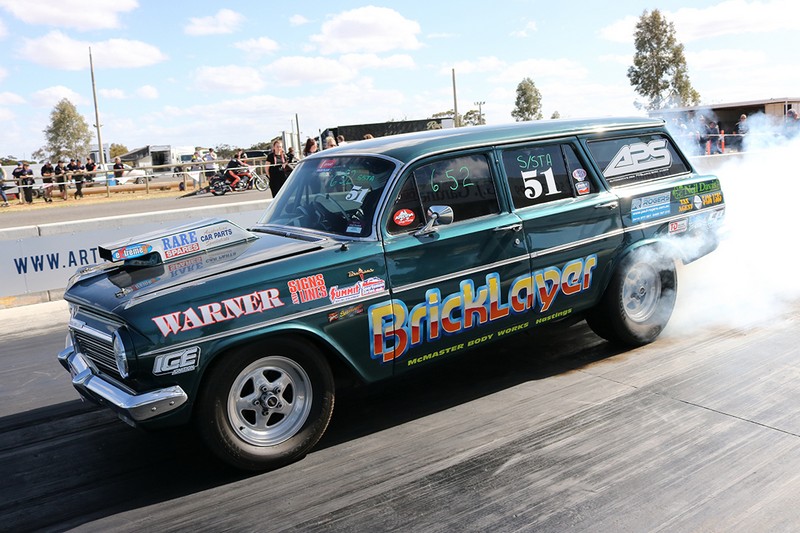 The day started well and just got better for DENSO Super Street winner Cooper, with the racer taking out the Top Qualifiers Medallion award for his bracket in his EH Holden Station Wagon before going on to race Harry Harris, Nikolas Karanovic and Peter Jephson ahead of a bye run in the semis. Bridges successfully faced off against Dan Stubbs (semis), Mark Sienczewski, John Kapiris and Jeffrey Farley. It was Cooper’s 36th national event win. “For the Bridges it was their first time ever to a final and I didn’t really care if I won to be honest, as they are just such a beautiful family and it would have been nice to have seen them get their first silver one,” Cooper said. “It has been one perfect day, and I was very pleased also to receive the DENSO voucher upon taking the win – their spark plugs are an excellent product. “I would like to thank Ricky Glass and Graeme Davis, Cavanagh Auto Parts, Automotive Performance Specialists, McMasters Body Works, Warner Signs and Lines, Paul Rogers Transmissions and of course, my wife Linda and daughter, Telisa.” 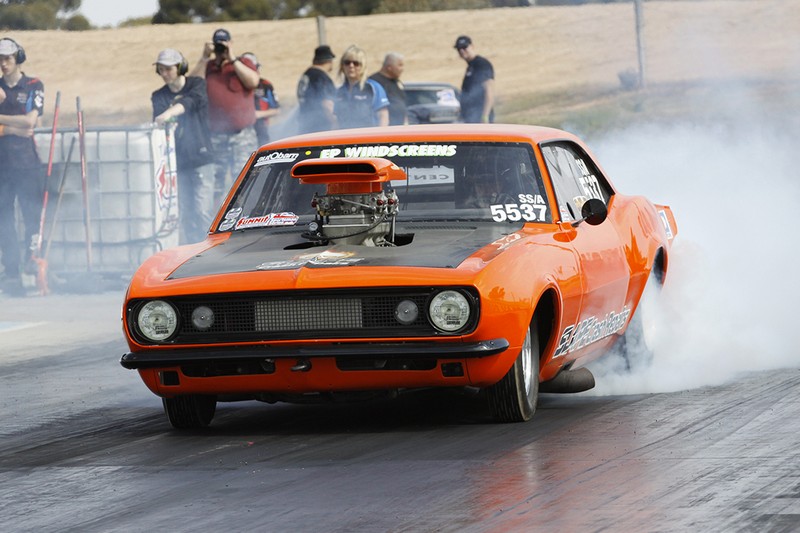 Super Sedan Top Qualifier Medallion recipient Davies beat Peter Tzokas (semis), Michael Milasiewicz and Alex Gkroidis on his way to the final in his Chevrolet Camro, after enjoying a bye run in his first outing. Runner-up Bresciano meanwhile received a bye run for his semis, after having earlier defeated John Kapiris, Robert Kardum and George Tipouikidis. “I am absolutely ecstatic to be honest. I have to thank my awesome crew, my wife Lisa, my lad Adam, my sponsors, and everyone that helps out, this is absolutely awesome,” Davies said. “I did my first run this morning and was the quickest qualifier so I was pretty wrapped with that. Then I had a bye run the first run and got through my second run with a reasonable reaction time. “For the third run I must admit that I probably shouldn’t have won that one but I was fortunate enough that the other guy did red light. In the semi-final, I cut a 0.007s light (reaction time) and absolutely creamed it, so that was awesome. In the final I cut a 0.016s light and while the guy next to me did break-out, it would have been very close anyway. I am absolutely chuffed.” Like many of the bracket tussles over the weekend, the Modified battle of Kisyma and Johnston was preceded by plenty of action, with Kisyma taking on and defeating Matt Czerny (semis), Cory Dyson, Top Qualifier Medallion recipient Simon Barlow and Bradley Hicks – who secured a Perfect Light award for a 0.000 reaction time for his eliminations appearance – on his way to the final. Prior to a bye run in the semis, Johnston successfully took on Kenny Stewart, Jess Turner and Kingsley Kuchel.   While Barlow might not have made it as far as he may have liked in eliminations, that didn’t stop him ticking off another major goal for the weekend – resetting both ends of the A/MD national record with a 4.425 second/159.19 mile per hour effort. On their way to the Super Gas final, Romeo dispatched Top Qualifier Medallion recipient Adrian McGrotty (semis) and Jeff Romeo while Spencer had a bye run to the final after taking victory over Warren Bull and Michael DeRose. In the Modified Bike battle, the finals pairing was set after Dycer had taken the win over Nathaniel McKay (semis), Top Qualifier Medallion recipient Danny Rickard and Garth O’Hehir. Crawford had faced and triumphed against Mario Baker (semis), Shane Walker and Matt Walden. The fight for the Top Sportsman victory came down to Theo and Damiani after they had raced and beat Top Qualifier Medallion recipient Jason Stares (semis), Danny Buccella and Paul Russo; and Darren Nichele (semis), Andrew Greening and Julian Carafa respectively. Spirited battles were also fought in the junior ranks, with Bishop beating out Baillie Ponton (semis), Josh Baker, Chelsea Sammut and Cody Brae on his way to facing Camilleri in the finals. Camilleri – who took out this event last year, had a bye run in her semi but not before she had to overcome last-round winner and points leader Jackson Perri, Tommy Turic and Jake Berias. Earlier in the day, Blake Hayes took out the Top Qualifiers Medallion for the bracket. The Supercharged Outlaws competition was, as always, enticing to watch. Stewart took the win over Keily after finding himself in the finals following victory over Rodger Weste in the semis, which was preceded by a bye run. Earlier, he had taken on Top Qualifier Medallion recipient Paul Stephen. Keily enjoyed a bye run in his semis, after taking on Dale Tucker and Shane Kramer. Super Comp competitor Robert Dekert, his Pontiac GXP and his team were recognised with the Best Presented Award, sponsored by the Sunraysia Drag Racing Association and Summit Racing.   ANDRA thanks the Sunraysia Drag Racing Association staff, volunteers and sponsors for an outstanding race track and a great event. Round four of the Summit Racing Equipment Sportsman Series, the Spring Nationals, will be held at Adelaide International Raceway on Saturday October 14. For more information, visit www.andra.com.au and http://adelaidedragracepromotions.com.au/ For full results from the Summit Racing Equipment Sportsman Series at Mildura Sunset Strip, please click here

Thanks for these images goes to Outlaw Images.