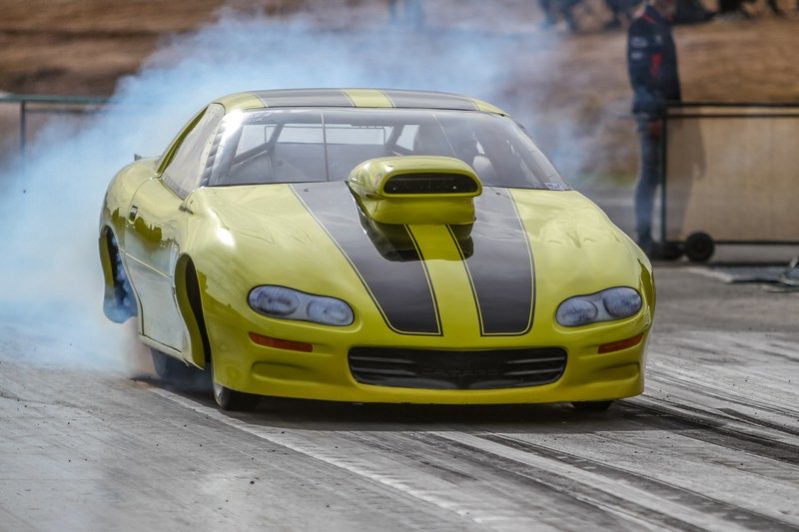 Racers have heralded round three of the 18/19 Summit Racing Equipment Sportsman Series, the Sunset Strip Nationals, a huge success following its conclusion in Mildura this evening.

“The racing went really well – we had a bit of luck in a couple of the rounds and everything fell into place over what was a good weekend,” Panagiotidis said.

“We weren’t trying to reset the record, but it is very pleasing and we certainly weren’t expecting the win – that was very unexpected but as the day went on we realised that we just might be able to do it.

“This was our first time in Mildura and it was a good weekend – the officials and volunteers tried really hard and kept the event going, it all ran smoothly and the weather was good as well. I would like to thank my crew as they did a great job all weekend and back home too preparing the car, and also the ANDRA officials and Kingsley Kuchel and all his volunteers at the race track – it was really nice to go there and we had a good time.”[/vc_column_text][/vc_column][/vc_row] 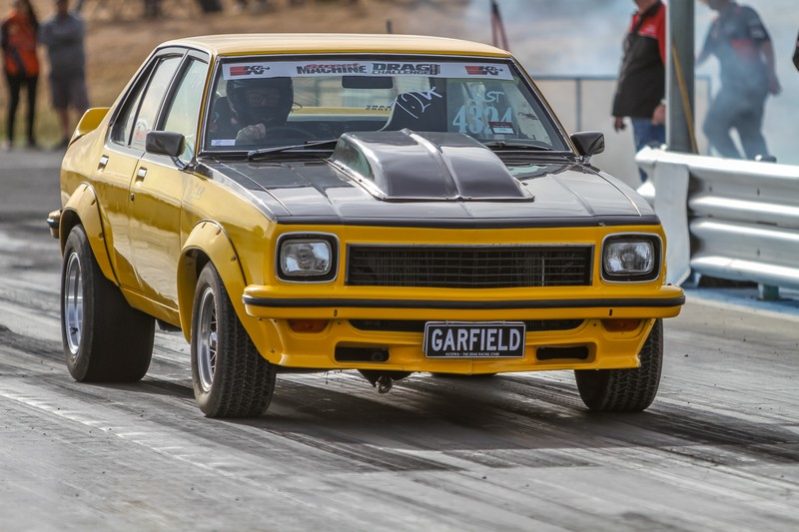 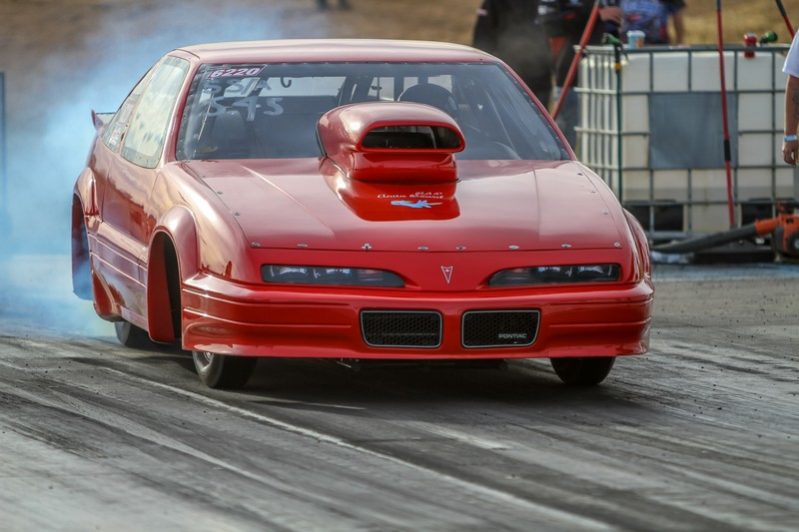 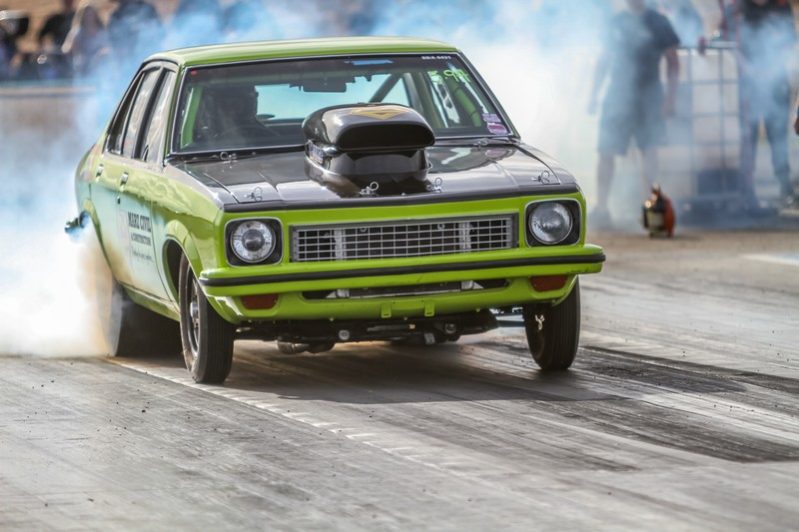 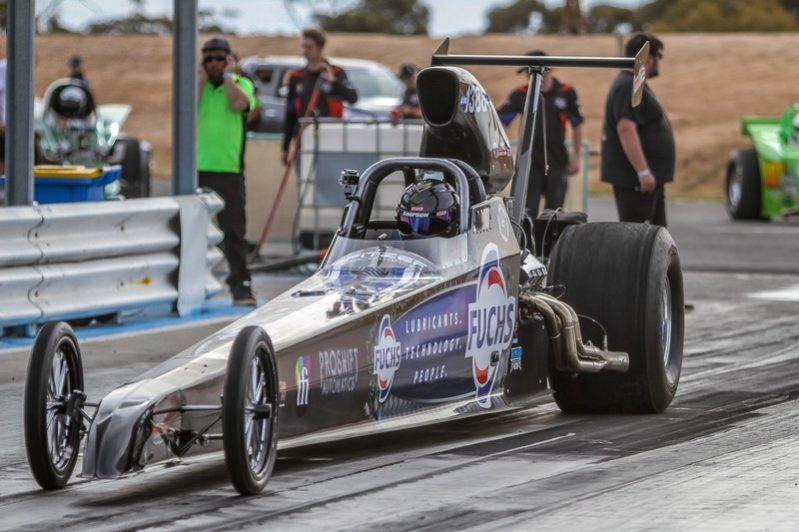 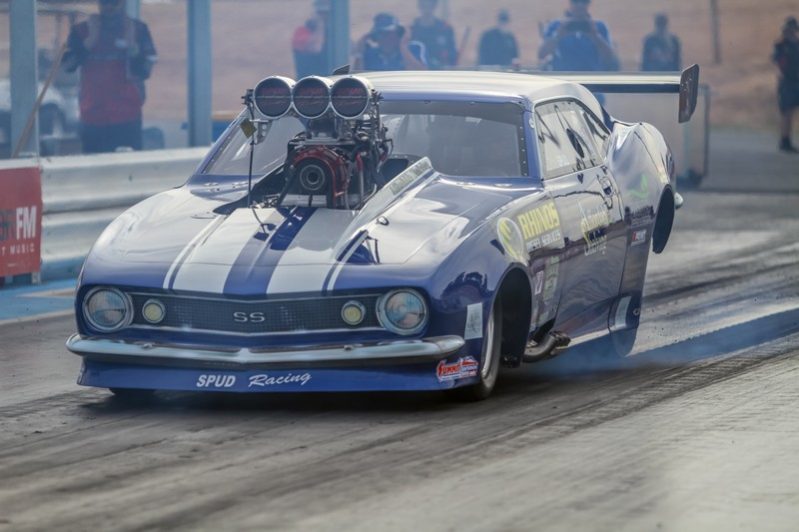 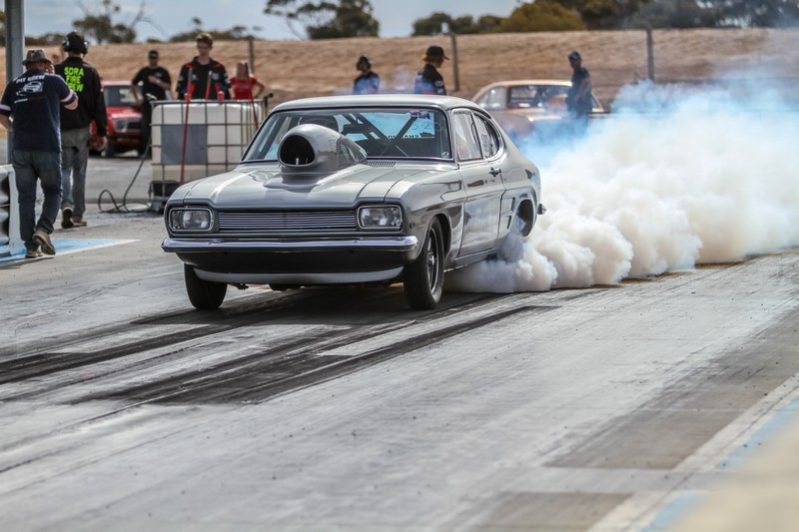 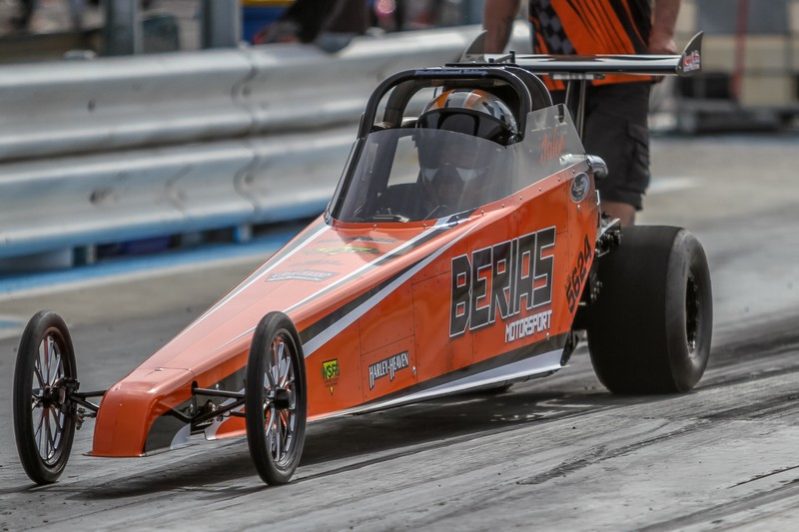 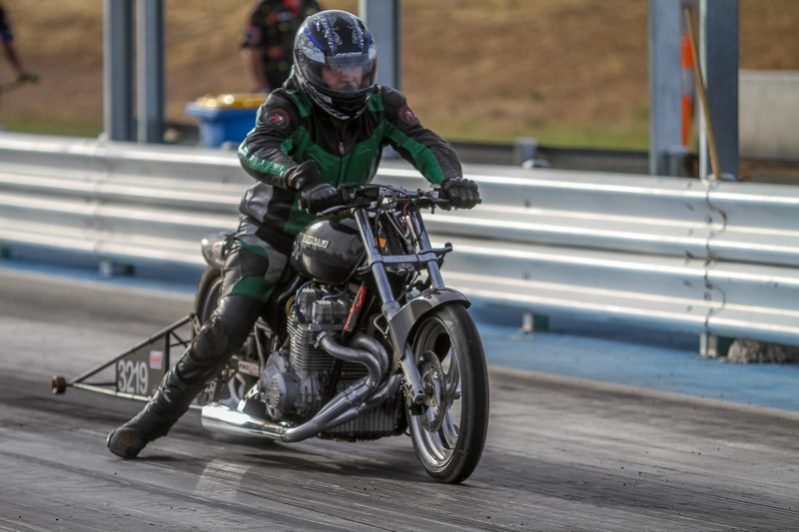 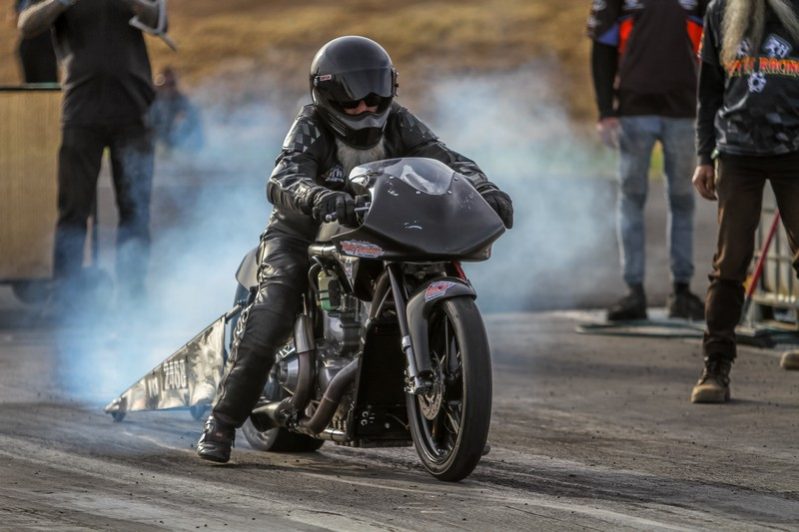 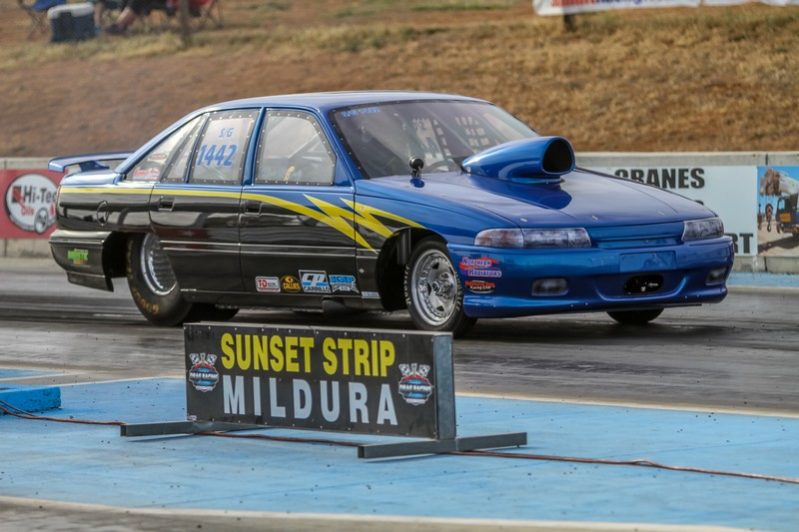 Competition Bike was another category with its share of records, with event winner and top qualifier Danny Rickard (V/CB – 5.615s and 123.41mph) and Rob Cassar (AA/CBN – 139.15mph) both resetting national records as part of racing today. The Competition Bike bracket ran a round robin format this weekend for the first time, with Rickard taking on and defeating Jase McFarlane in the final to take out the event victory today.

“The bike didn’t seem to be running that well so I was trying to adjust the clutch between runs. We had a bit of help along the way with a couple of guys breaking out and so on. On each run it seemed I was able to get in front of them and make it over the line, and I was just backing it off and saving my dial-in,” McGinn said.

“In the final I was up against the flying Finn and everyone reminded me he was a back to back champion so I was thinking ‘oh crikey’, but my reaction times had been ‘point zeros’ all day and in the final it was pretty much a repeat of all the other races really, it all went my way! The last time I was at Mildura was about 38 years ago and I lost all my grape picking wages on the greyhounds, so this was a much better experience and I am now looking forward to the next round at Portland and hopefully our good luck will continue!”

In the Top Sportsman ranks, defending champion Jason Arbery took home his second round win for the season so far by defeating Glenn Henley in the final. He had earlier taken victory from Bruce Henley (semi-final), Vlado Turic and Darren Saliba while Glenn Henley had faced off against Greg Damiani, Stuart McBain and top qualifier, Amanda Martin.

In the Modified category, it all came down to Kenny Stewart and Craig Baker in the final, with Stewart ultimately taking out the victory after having earlier beaten Gavin Chisnell (semi-final), Ashley Johnson, Sergio Bonetti and Frank Quaini. Baker meanwhile had enjoyed a bye run to the final after having earlier beaten Chris Farrell, Danny Wilson and Jess Turner. The Modified class was also another bracket which played host to a record-setting performance, with Rob McKay resetting the national BB/MD speed record to 139.78mph on his way to a first round lose.

One racer who certainly stood out from the crowd this weekend was Robert Camilleri, who won today’s Super Sedan battle after top qualifying the day before. On his way to the final against runner-up Peter Tzokas, Camilleri took on and defeated Rob Evans (semi), Paul Roberts and Ned Karanovic. Tzokas meanwhile had beaten Dave Todd, Brett Mathew, Enio Marrocco and Stephen Crook.

“What a great weekend, it was superbly run and everything was 100 percent. I can’t thank the officials and the crew at Mildura enough, it has just been the best weekend,” Camilleri said.

“Every time we go there it is better and better, they look after us better than any other race track I have been to in the country I think, they treat us ‘first class’.

“We were actually running in Top Sportsman and then we pulled back for this meeting and it paid off. We thought the Top Qualifier result was possible but we didn’t expect the win – we are wrapped with the result and we absolutely had a ball not only with myself racing but also my daughters Brooke and Holly.

“Whether I will be at Portland is up to my boss – my wife Anne,” he laughed, while thanking her and his girls for their support as well as his crew Jordan Tatchell, Jamie Tatchell, Claudia Tatchell, Brock Langley, Liam and Ricky Smith and Wayne Scheames.

Justin Russell was another grinning wildly at the close of proceedings today, taking out the Supercharged Outlaws win over Tim Stewart after earlier taking victory from Paul Stephen (semi) and Shaun Kerkman (first round) while enjoying a bye run in between. Earlier, Stewart had his own bye run into the finals after having successfully faced off against Jason Keily and Andrew Chessells.

“I have had a great weekend – Collingwood winning on Friday was awesome and then to take out Outlaws today is just fantastic, I am on cloud nine,” enthused Russell.

“It came back on as we pushed back to the pits so we thought we had a loose wire and pulled the car apart only to find nothing. We then tried to start it and when it wouldn’t start, found the ring gear locked into the flex plate. In went a spare starter motor and we just made it out for the second qualifier where we ran a 4.32s which were happy with – we knew we had a good package and that we were in with a chance – in the first round something went wrong with Shaun Kerkman’s car so I won that and then came around for a bye run, then we faced Paul Stephen in the final. I am always a bit wary with Paul and he didn’t disappoint – he definitely turned it on coming into my lane and taking out all the blocks, I didn’t see him but apparently it was close!

“Tim Stewart couldn’t face me in the final after popping the blower in his bye run, so we accepted the tree. It has been an awesome event, Kingsley and Lauren Kuchel did a fantastic job, ANDRA were fantastic and Tim Reidy did a great job. We had a dream run, great weather and top crew. We couldn’t be doing this either without our new major sponsor, Affordable Shelving from Melbourne, he has come on board to help us chase the number one again!”

In the Summit Racing Equipment Junior Dragster bracket, Jake Berias made it three wins from three rounds by taking victory from runner-up Chelsea Sammut after earlier taking victory from top qualifier Zara Board, Tommy Turic, Sarah Osborne and Sarah Donnelly. Sammut meanwhile had faced off against Daniel ‘BatDan’ Carranza, Jordan Spencer, Ayden Lanciana and Brooke Camilleri to book her place in the final.

In the Super Street ranks, it all came down to Rodney Kerr and David Brae. Kerr had taken on Paul Jennings, Tony Barbara, Anthony Burke and Des Jeffree on his way to the final while Brae faced off against K Borg, top qualifier Robyn Phillis, Cara Bertoli and Michael Giannaros.

ANDRA thanks the Sunraysia Drag Racing Association as well as all of the volunteers and sponsors for an outstanding race track and a well-run event.

Round four of the 18/19 Summit Racing Equipment Sportsman Series, the South Coast Nationals, will be held at Portland’s South Coast Raceway across November 10 and 11. For more information on that event, please visit www.andra.com.au or www.southcoastraceway.com.au