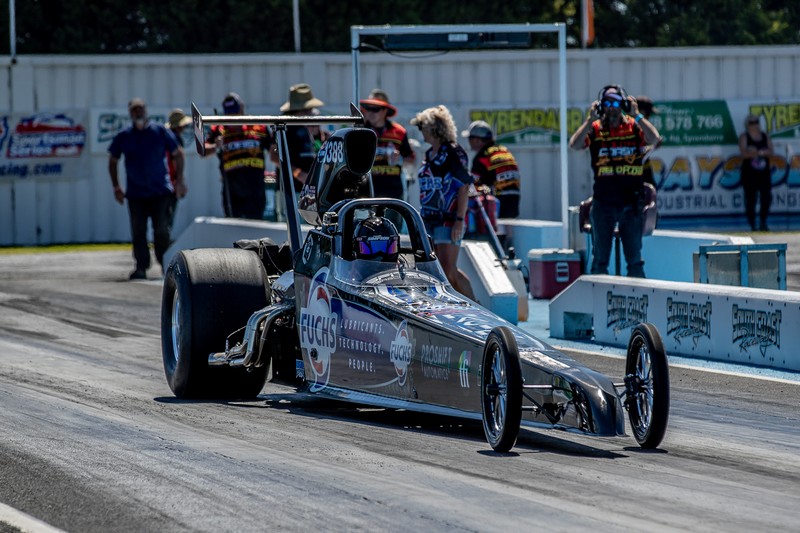 As the 19/20/21 Summit Racing Equipment Sportsman Series heads to Mildura’s Sunset Strip for its hotly anticipated conclusion this weekend (March 12/13), the Modified bracket is getting ready for an exceptionally tight championship battle.

Defending champion Adam Mundy leads the way on the maximum 300 points, but 2012 champ Kenny Stewart is nipping at his heels on 280 points ahead of Joshua Baker (260) and Bradley Hicks (240).

“Looking at it, I think it is probably one of the closest points chases we have had in the bracket in a long time. There is a lot of good racers who are up on points and could jump ahead this weekend – we have seen it in the past, where guys have come from behind and taken it out,” Stewart said.

“Whatever happens on the day is going to happen. We are feeling confident as we haven’t changed the car in any way in the last two years and it is performing very well, and we know the track pretty well.

“As long as the driver does his bit, I think we will have a chance, but there is always someone in the other lane chasing just as hard as me, so all we can do is go in hopeful, try our best, and see what happens.

“If we can take it out, I would be just rapt once again as it is one of those things that is really hard to get – there are a lot of racers trying to get it so if you are able to win, you know you have really performed well against some of the best racers running the Summit Racing Equipment Sportsman Series.”

While Stewart wasn’t in action at the recent Westernationals, he did take part in Portland’s South Coast 660 and walked away with a victory – his second round win of the extended season.

“The South Coast 660 was our first time back out after COVID and it was just amazing. At the test and tune the night before it went straight down the track and the car was spot on, so that boosted our confidence right up and we were able to go into racing not worrying about having to change settings or mess around with the car too much,” he explained.

The Victorian racer says he is a fan of the Mildura eighth mile venue.

“I have always liked Mildura and we have supported the track for a long, long time now. They can really suffer with the dust at times, but it is the smoothest eighth mile track in the country in my opinion,” Stewart said.

“It is a nice track and Mildura is a beautiful city – it is always good to go and visit these places and I like supporting the regional tracks.

“As we get ready to head there this weekend, I need to say thank you to my sponsors Fuchs Lubricants, Proshift Automatics, Gene Cook Race Engines, R&J Batteries, Swarf King Engineering, Gerry’s Ski Shop and Total Fleet Imaging for all of their support.

“I also must recognise my crew who for this weekend will be Doina Day and Peter Day, and hopefully we will be able to get ‘lucky’ Leanne Braggs to help us again because every time she has crewed for us, we haven’t lost! Although maybe some other racer might pay her to stay away from us,” he laughed. “If Leanne is not there in person, I think I will be speaking to her on the phone!”