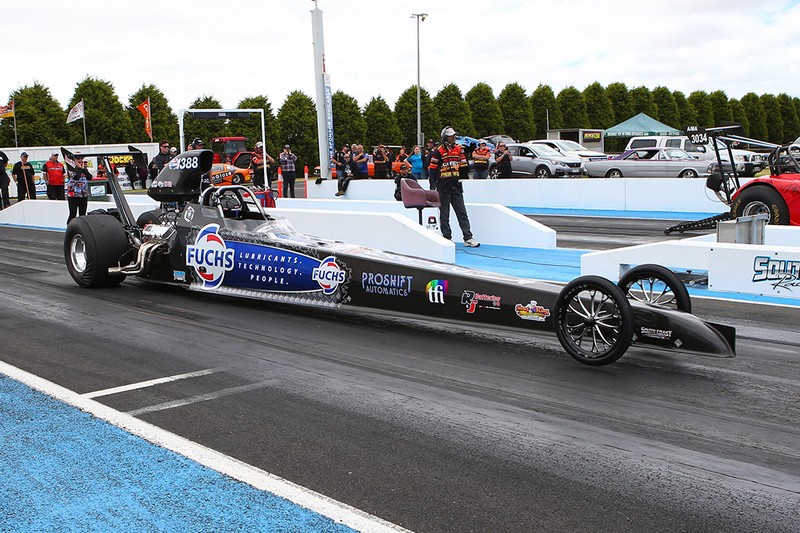 Kenny Stewart is fifth in the 2019/2020 Summit Racing Equipment Sportsman Series Modified ranks, thanks to victory at the 2020 South Coast 660 event at Portland’s South Coast Raceway earlier this year.

Now, along with the rest of the competitors invested in the 2019/2020 Summit Racing Equipment Sportsman Series, the warehousing professional is anxiously awaiting a return to national racing when COVID-19 restrictions ease.

“The South Coast 660 was a really good event. We had Leanne Braggs crewing for us again and it is always great to have her as part of the team,” he said.

“There was also a lot of good racing and in the final, I raced my mate Chris Farrell and he dialled in heads-up with me and it came down to reaction times.

“We both crossed the line and had no idea who had won, I thought he had pipped me at the post to be honest.

“There is always good racing in Portland and I love the track there, it is a really fantastic place to race.

“That event is a real career stand-out for me, alongside my victory at the 2011 Fuchs Nationals where we won in our Fuchs-sponsored car in front of all of their management. We have been supported by Fuchs for 28 years so that was a really special moment as well.”

While the January event was exceptionally successful for the 52-year-old Tarneit (Victoria) resident, it hasn’t all been smooth sailing.

“At our first meeting, the Sunset Strip Nationals at Mildura in September 2019, I came down with something just before the afternoon of racing and I went out the first round with the worst reaction time I had ever done so that was lost right at the beginning,” he remembered.

“We also weren’t able to go to Perth for either the Goldenstates or the Westernationals unfortunately – they are fantastic events and we love to go to Perth, but we just couldn’t make it work with time off this season.

“It is hard championship wise when you aren’t travelling, but kudos to the guys who go all in to travel and chase the events, they really deserve it.”

When it comes to Modified racing, Stewart says the competitive nature of the bracket is a real draw card.

“I have always raced in Modified and I love it because it delivers really good and tight racing. There are some races where the win margin comes down to .0003 in runs where you get to the end and have no idea who took the win, you just have to wait and hear,” he said.

“There is really good and tight racing wherever you go and it is a well-supported bracket. It is also a reasonably affordable bracket – you can make it as cheap or as expensive as you like, and even spending just a little bit of money you can go really fast.”

Stewart first came to the Modified ranks in 1994, after making a decision to pursue drag racing in 1992.

“Originally we had a street car that was my daily driver that we used to take to the track sometimes, but eventually it got to a point where it wasn’t really a daily driver anymore and it couldn’t do both,” he said.

“A good friend, Ian Cameron, used to race and had a dragster. I was amazed by it and we started talking prices and so forth and I realised it wasn’t as expensive as I thought. He was probably one of the first to get me really started down this path. We bought our first race car in 1992 and built that up ready to race by 1994.”

Over the enforced break from the Summit Racing Equipment Sportsman Series, Stewart has been taking the time to make some improvements on his Fuchs Spitzer dragster.

“We have taken the top end off the motor, put new valve springs in and recut the seats on the valves and that was about it for the motor,” Stewart explained.

“We also put the car back on the dyno and sorted the high speed out. There has been a bit of guess work here and there in the past and while we had it reasonably close with the Racepak, the dyno was great for really sorting it out and we found a bit of extra horsepower there.”

As he eagerly awaits a return to racing, Stewart has a number of people he wishes to recognise for their support of his racing.

“Fuchs Lubricants has backed us for 28 years and we are very thankful for their ongoing support,” he said.

“I also want to thank Gene Cook Race Engines, Pro Shift Automatics, Swarf King Engineering, Gerry’s Ski Shop and R&J Batteries. I also must thank the Minister of Finance – my wife, Amanda,” he grinned, “as well as all of the people who help us by crewing – Leanne Braggs, Gerry from Gerry’s Ski Shop, Doina Day, Will Berry from Portland, and Reg and Tom from South Australia.

“I am also very thankful to Summit Racing Equipment for their input into the Series and all of the tracks, without these guys supporting and hosting these events respectively we wouldn’t be racing anywhere.

“It is great to see also that Calder Park Raceway and Adelaide International Raceway are putting in some big efforts to get up and running with upgrades and I am looking forward to hopefully racing with them in the near future.”

IMAGE AT TOP: KENNY STEWART IN ACTION AT THE SOUTH COAST 660. IMAGE BY OUTLAW IMAGES.