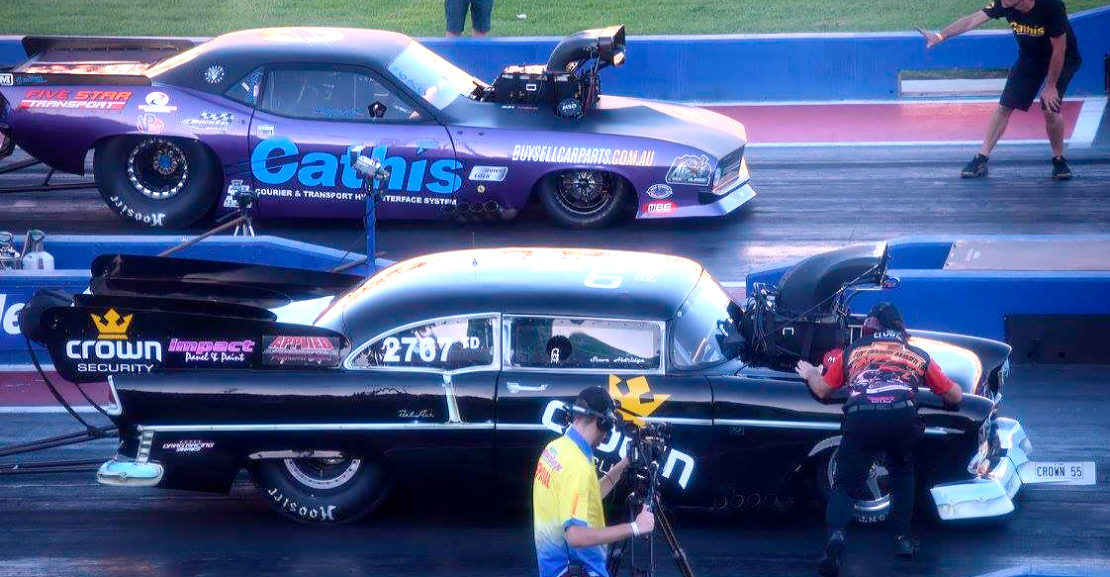 Steve Aldridge and the Crown Security Top Doorslammer team have been showing potential beyond the capacity of their 20-year old ’55 Chev-bodied Murray Anderson chassis. That potential may be realised next season with the news that Aldridge has taken delivery of the ex-Frank Mamone Plymouth Barracuda…

Steve Aldridge and the Crown Security Top Doorslammer team have been showing potential beyond the capacity of their 20-year old '55 Chev-bodied Murray Anderson chassis.

That potential may be realised next season with the news that Aldridge has taken delivery of the ex-Frank Mamone Plymouth Barracuda, to step his operation up to the next level.

The ‘Cuda, which was a runner up at the Westernationals on Sunday, went straight from the track to Aldridge’s workshop as a roller, ready for a new engine combination.

“Our Chev has been a great car for the past six seasons, but now is the time to move to something that will be on-weight and therefore more competitive,” Aldridge said. “Only then will we see what this team is really capable of.”

Aldridge said he was drawn to the ‘Cuda because of its unique body shape and the fact that the Hemi motor is native to the original.

“I was originally attracted to my ’55 Chev because it was different, and I like the idea that the ‘Cuda is a little bit different too. It is more aerodynamic and being only a couple of years old has been built using more modern techniques and state of the art components.”

Aldridge had tentatively looked at some new cars around, including in the USA, but on seeing the ‘Cuda he became interested in the advantages of a local proposition.

“We did the deal on Saturday afternoon and everyone went away happy, there was no waiting, Frank got to go home with an empty trailer and I took the car to the workshop,” he said.

“It was good to be able to instantly take it home, and we have plenty of time to get ready for next season. It seems like a well-made car, it is modern and has everything we need, the original Chev would have been up for carbon brakes this off season and this car has all that, there is nothing more to do with it except putting our engine in.”

The Crown Security team have performed well in the Summer Slam Series this season at Perth Motorplex, with Aldridge eyeing a second-place finish.

“Our crew chief Andrew Fowler has turned us around and by giving him a competitive car with less weight we should be hoping to qualify when the ANDRA rounds come over.

The plan is to finish the season off with the ’55 Chev at the Grand Final on April 8, complete with a for sale sign.

“We will advertise the car for sale, so people will be able to see the car running if they want,” he said. “There’s still plenty of life left in this car for Comp or Supercharged Outlaws and I’m sure it will find a great home.”