Shock to the system

Shock to the system 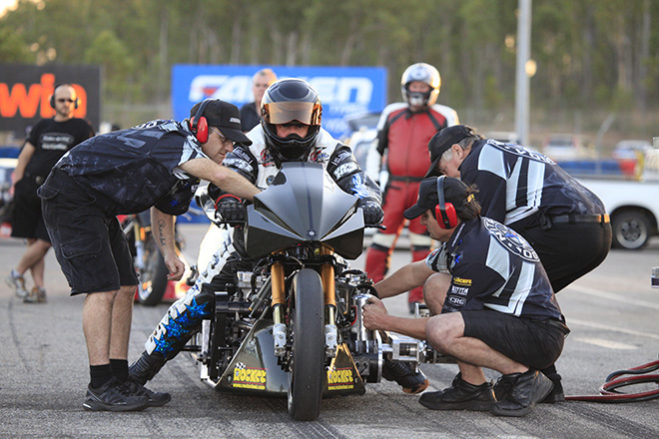 Three times Top Fuel Motorcycle Champion Chris Matheson took the full brunt of a freak accident in Round 5 of the ANDRA Drag Racing Series for Top Fuel Motorcycle, held at Hidden Valley Dragstrip in Darwin over the weekend of 11-12 July.…

Three times Top Fuel Motorcycle Champion Chris Matheson took the full brunt of a freak accident in Round 5 of the ANDRA Drag Racing Series for Top Fuel Motorcycle, held at Hidden Valley Dragstrip in Darwin over the weekend of 11-12 July.

Matheson received an electric shock into his hands at high speed due to an engine malfunction. The jolt caused him to release his grip on the handlebars, nearly blowing him off the bike as he thundered down the track in the first Round of eliminations.

He survived the massive charge and was able to re-gather control of the bike, shutting down at the end of the track. Matheson was then taken to Darwin Base Hospital where he was held for observation until being released early the next morning.

Matheson said the jolt through the handlebars was like being kicked in the chest by a mule,

“It really belted me about,” he said. “I was extremely lucky I wasn’t blown off, as being sat up like that, you’re vulnerable to huge wind pressure, being out of the front aero of the bikes nose cone.

“The whole weekend was tough, despite top qualifying, with a lazy 6.628 second pass the night before, we just couldn’t fine our rhythm.

“The track was great and we saw a big crowd over both nights, it was fantastic. The officials and track staff did a great job all weekend.”

Despite the mishap in the first eliminator, fellow racer, Terry Burnett was disqualified after glancing the wall, which gave Matheson the win.

“Unfortunately, I couldn’t show for the next round, which we had a bye, then hoped to meet rival Mark Drew on his new Nitro Harley, who eventually took out the event on a solo, clocking a 6.465 second pass.”

Matheson said the four-day drive home to the Nitro Voodoo base in Brisbane with crewman Graeme Turner, gave him plenty of time to ponder what could have been.

“We have lost our winning reliability and performance over the last season and need to find it if we are going to be serious contenders again.

“I was very fortunate, it could have been a lot worse if the shock didn’t get me, the blow off may very well have beat me up really bad.”

Matheson knows that feeling all too well after recovering from a near fatal blow off last season, when he lifted from his Top Fuel Motorcycle at over 370 kph at Sydney Dragway in May last year.

He thanked the doctors and nurses in the emergency ward at the Darwin Base Hospital and the Ambulance crew who cared for him at the scene.

“I was in good hands and thankful for all the well wishes from fans and friends. I’m looking forward to the Nationals in Sydney in November. We have the chance to do some testing in between and will be ready to roll.

“Well done to Mark Drew and his team on winning the Darwin Round.”