Season of hurdles but Matho happy with V-Twin Jack Hammer

Season of hurdles but Matho happy with V-Twin Jack Hammer 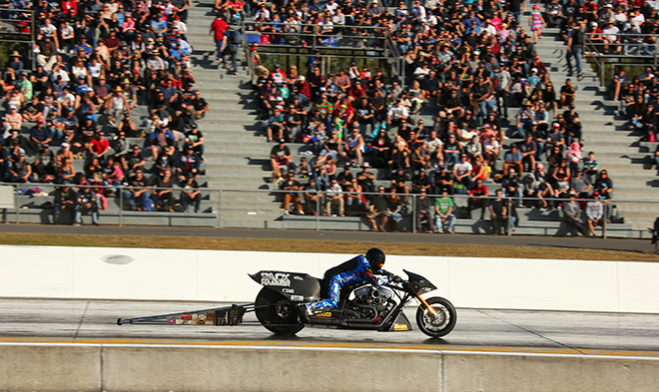 In what was somewhat of an experimental season for Matho on the V-Twin Jack Hammer machine, he feels the team is on top of the bike and “are ready to roll” in 2015/2016.

“We had some big highs, winning Round 1 at the season opener in Perth, then virtually not scoring at Round 2 and 3 due to a clutch fire,” said Matheson.

“We then had a rain out at the Nationals in Sydney, leaving the Winters to try to regain points in our chase.

“Testing the weekend prior to the Winters started off well with a 6.7sec shake down pass, then we chased a gremlin all race weekend.

“My crew worked tirelessly to find the issue, unfortunately, we ran out of passes to dial in the bikes performance back on track.

“Despite the hurdles, we were happy with our first season, albeit, not number one at the end of the day.”

With a four month break before heading to the Springnationals at Adelaide International Raceway to start the new season Top Fuel Motorcycle season, Crew Chief Graeme Turner and the team are fired up for the new full twelve month season.

“The new 2015/2016 calendar will see us traverse the country, covering all points of the compass, clocking up some 30,000 kilometers (18,641 miles), mostly across outback Australia.

“We would like to take the opportunity to thank all our sponsors, supporters and fans and in particular the track officials and volunteers who make the events happen.

“The series ended on a huge high, with great weather and big crowds at the Winternationals. Well done to all concerned and a special thank you to my Team.