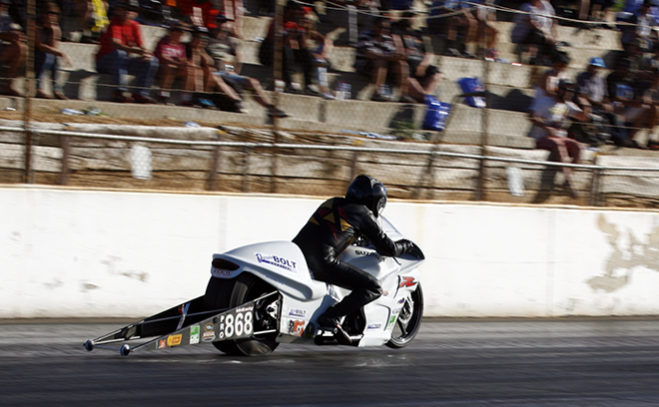 Scott White had that feeling of confidence prior to the first round of the 2015 ANDRA Pro Stock Motorcycle Championship at Adelaide International Raceway. He had arrived early and set up shop at Jim Hanlon’s Superbike Performance in preparation for the VPW Pro Series 1000.…

Scott White had that feeling of confidence prior to the first round of the 2015 ANDRA Pro Stock Motorcycle Championship at Adelaide International Raceway. He had arrived early and set up shop at Jim Hanlon’s Superbike Performance in preparation for the VPW Pro Series 1000.

The first qualifier saw a promising 7.39 time card over the quarter-mile, but a power jet hose had split and sucked air into one pot, which caused the engine to nose over. “We were lucky that we didn’t suffer any damage to the engine,” said White. “Had we not had that problem it would have been a lot quicker.

“On the second qualifying attempt I had the slippery lane so we kept the same tune-up and didn’t step it up. As predicted it spun the tyre and headed out toward wall. I was off the throttle five seconds into the run and having looked at the early incremental times which matched our PB to 60ft, I believe it had the potential to have been a very quick pass.

“We are making good horsepower, no doubt about it. It’s just trying to figure how to get it down onto the track,” said White.

“The last qualifier was in lane two again. It was our preferred lane so we decided to step it up a little. We were hoping to run into the twenties so put some more clutch into it, but it spun hard before moving at all. Never quite felt it like that before so that run was totally out the door. The track just couldn’t take it and it probably spun about three times.

“For eliminations the following day, we were down to four bikes but what a tight group it was. You had a 7.38, 7.39 and a 7.39. I had Ryan Learmonth in the first round so we turned it down to try a take some grunt out of it, and also see what was going on with the clutch.

“Even with it backed down the tyre spun again and turned the two or three times before moving out. He (Ryan) got a jump on me but I felt I was catching him.

“But that’s when the fun really started,” said White. “Just before I crossed the finish line at close to 178 mph (287kph), the left hand side air scoop of the fairing cracked and hung in the wind like a big sail and of course dragged me over on the side and tried to throw me into the ground. So I stuck my boot down at 178 mph, which wore the end of the boot completely to the point of seeing my socks. I jammed my foot into the ground to hold me up long enough to the point where the scoop broke off, flung around and hit me in the back quite heavily which then threw me the other way towards the wall. So it was quite a scary ride.

“In the meantime the scoop went under the wheel and tore the body work to pieces. So as you can imagine it made quite a mess,” said White.

At that stage White was thinking that he would be out for the season as he felt that he wouldn’t be able to rebuild with his limited budget.

However the next morning he was in conversation with Dale Gilbert from D&D Industries who said he could make the repairs at a very reasonable cost.

“It’s still an expensive exercise but I’m heading up to Sydney now while the body is off to Melbourne to be repaired. I also need a new rear tyre and boots.

“So I’m keeping my hopes up that it will all come together for the next round of the championship at Sydney Dragway. The good news is that I’m alive, well and upright. It could have been a hell of a lot worse when I think about it, as it was one of my scariest moments for sure,” said White.

“I remember pulling up on the return road next to Ryan with smoke pouring off the tyres, pieces of bodywork hanging everywhere. It was quite a picture really.

“Anyway we’ll make the most of a bad situation. On the upside the engine is working really well and making good horsepower, so we are right up there. We just need to make it all come together for the next round in May at the Nitro Champs in Sydney. Thanks to Darwin Bolt Supplies, SuperBike Performance and Motorsports NT.”