Scott White has eyes on golden prize in 2015

Scott White has eyes on golden prize in 2015 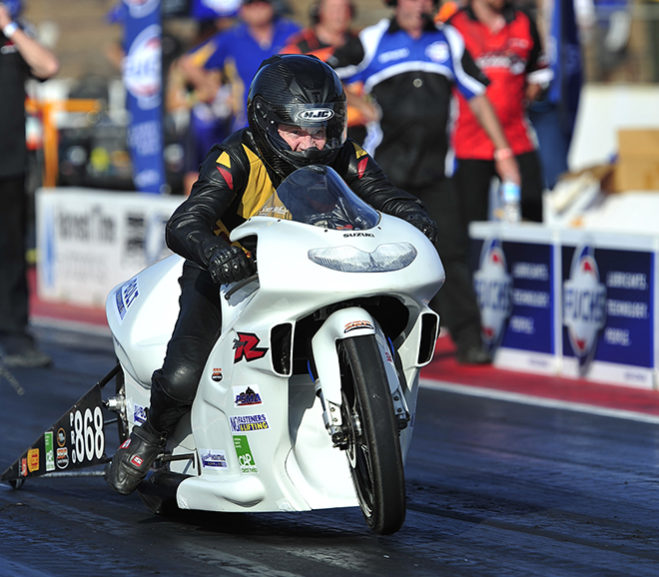 Scott White remembers the last time he was at Adelaide International Raceway very well. It was at the 2014 Fuchs Spring Nationals for Round 4 of the ANDRA Pro Stock Motorcycle Championships. The Darwin-based rider qualified third in the field of six riders with a 7.413 elapsed-time. However in the f…

Scott White remembers the last time he was at Adelaide International Raceway very well. It was at the 2014 Fuchs Spring Nationals for Round 4 of the ANDRA Pro Stock Motorcycle Championships.

The Darwin-based rider qualified third in the field of six riders with a 7.413 elapsed-time. However in the first round of competition, White experienced one of those career moments when he defeated Rookie Ryan Learmonth with a PB time of 7.20 seconds. This not only was a giant performance leap for White but the ET also stood as the quickest run of the year for the bracket.

The good fortune looked to continue in the semi finals against Maurice Allen. “Incremental times were looking even better and combined with the holeshot startline advantage I had on Maurice, it looked like a winner. However I was unable to shift out of third gear when the air shift line blew off,” said White. This allowed Maurice to catch up and cross the finish line ahead of me.”

This coming weekend White is ready to go one-step further at the VPW Pro Series 1000. “Rino from Racing Onn Promotions has been working hard on the promotional path with some drag racing demonstrations at the V8 Supercars Clipsal 500. As a result it will hopefully pack the venue out again,” said White.

“It’s a short season so I need to make sure each and every run counts towards the championships. The reigning champ Luke Crowley has parked his operation for the time being, but we still have former champ Maurice Allen in the mix.

“I arrived two weeks early in Adelaide and pulled both my engines down. The purpose was to spend some time in the Superbike Performance workshop for some cylinder head work as well as a crank change in the small engine. Being the last of the 4-valves, I can see the mechanical stresses in mine that are not present in the 2-valve imported Vortex heads that everyone else is running. Both my heads started life in a street bike in 1987, so to get these motors with stock cases to this level of performance is something I’m very proud of.

“With this being a short season, I hope to manage each round as this time I will park up the van and trailer at our new home in Glasshouse Mountains, Queensland once the Winternationals are run and won.

“This is the year of an ANDRA Gold Christmas tree for me surely, but who knows how things will pan out. Anything can happen. It’s one step at a time, persistence, and attention to detail while mixing in the enjoyment of racing in ANDRA Group One Championship and doing what I love, “said White.

“I have new cams for the big motor as the original order ones were a mismatch, so we have high hopes of running into the teens this season or maybe quicker.

“Thanks to the continued support from Darwin Bolt Supplies and the other Normist Group shops – Alice Bolt Supplies, Warwick Bolt Supplies and North Queensland Fasteners. Jim Hanlon at Superbike Performance has been kind enough to let me use his workshop, provide guidance, and let me sleep in the carpark and to Motorsports NT again who assisted me with a grant to help with the many miles I cover.

“With all the talk from competitors about running the first Pro Stock Motorcycle six, I will just focus on doing the best we can with the budget we are on.