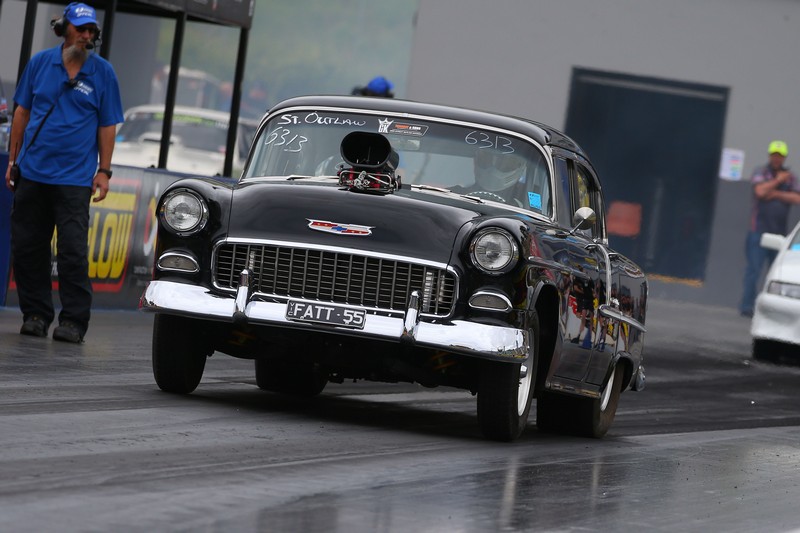 Rohan Hutson has been involved with drag racing for 12 years, but will make his Australian Nationals debut at Sydney Dragway next weekend (11-12 February) as part of ANDRA’s Summit Racing Equipment Sportsman Series.

Hutson will field his immaculate 1955 Chevy in the Super Street class at the February 11-12 event, which will also feature the Burson Auto Parts Australian Top Fuel Championship and the Australian Drag Racing Championship.

“I have always been into cars, my dad was into hot rods, and I guess you could say I was sort of born into it,” Hutson said.

“I bought my race car from America, it was a one-owner, unrestored original and totally immaculate car, and my wife says I ruined it turning it into a race car,” he laughed.

“It has a Supercharged 540 cube big block in it, and it is tubbed. It is still street registered and occasionally gets taken out on the road, it is essentially a nine-second street car!”

While the Echuca (Victoria) racer is quick to note that races with a primary goal of having fun, he does have some momentum behind him currently after coming runner-up at the recent Grudge Kings event, also held at Sydney Dragway.

“I really like to just go and have fun – my son and I go and enjoy it, go away for the weekend and have some fun and try and not break anything – that is the main goal,” the 46-year-old grinned.

“Having said that, we did race at Grudge Kings not long ago and got the runner-up, and that was pretty cool.

“I have been to the Australian Nationals a few times when it has been at Calder Park and I have always loved watching it, so to be racing in it next weekend is pretty special.

“I am definitely really looking forward to being a part of it and being up there with all the heavy hitters, of which I am not! Hopefully we can have some good fun and not break it!

“Hopefully we can race a few other Summit Racing Equipment Sportsman Series events in the future too – we have entered a few, but with COVID-19 so far, we haven’t been able to race one before now, so we can’t wait to get into it next Friday and Saturday.”

While Hutson – a mechanic who owns the business Australian Auto Air – might be the only one in his immediate family taking to the strip for now, his children are already preparing for their turn.

“My son Jai is 16 and he is talking about getting into racing, he has an XR6 Ute he wants to put a turbo and he also has a 55 Chev,” he explained.

“My daughter Piper is 11 and she also has a project car, she has a 68 Camaro. She is a bit young just yet, but I am sure she will be ready to take to the track very soon.

“My thanks goes to Jai and Piper as well as my wife Leanne for all of their support.”

The Australian Nationals will be held at Sydney Dragway next Friday and Saturday (February 11-12). Entries are open until February 4 and spectator tickets are on sale now. For event information, visit www.sydneydragway.com.au