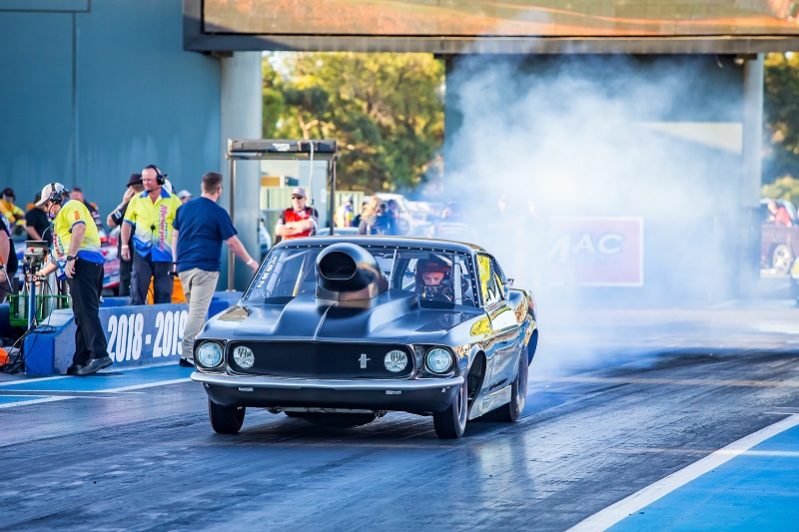 The journey to his first ever ANDRA Christmas Tree at the recent Goldenstates was an exceptionally smooth one for Top Sportsman racer Chris Roe.

The West Australian racer has been a regular competitor at his home track for three years and after much pursuit, finally lifted his first ANDRA Christmas Tree on December 1 with a Top Sportsman victory at what was round five of the 18/19 Summit Racing Equipment Sportsman Series.

“It was a very smooth day: the car was super consistent, I ticked all the boxes, and my crew did an awesome job as usual,” Roe explained.

“We didn’t do anything to the car apart from the basic fuel and tyres throughout the day, and before the event we didn’t really touch it – we have been leaving the car alone and that is why it has been really consistent, we have tried the game of changing stuff between events before and found that was a really good way to not win!” he laughed.

“Due to work I can’t really race outside of Western Australia but I am looking forward to when the Summit Racing Equipment Sportsman Series comes back to Perth in March and April of next year,” said Roe, who runs an earthmoving business.

“I will be there for sure as long as nothing disastrous happens between now and then. ANDRA Christmas Trees are hard to get, so those events are a real stand-out for me and I can’t wait to have a crack at bringing another one home.

“I haven’t been racing seriously all that long, only around three years after some time racing on and off, so I am thrilled to bits to now have an ANDRA Christmas Tree to my name.”

Unsurprisingly, Roe has a host of people he wants to thank for being a part of his journey so far.

“I have to thank my crew Erica, Jordyn and my mate ‘Gibbo’ for all they do for me, and also Ray Treasure – the main man at the Perth Motorplex – and all of his crew for all that they do,” Roe said.

“I really want to thank everyone that is involved in making these events possible, from the track and the volunteers to the sponsors and the ANDRA officials, to anyone else who is part of making it into the awesome day that it is at what in my opinion is one of the best tracks in the country.

“I would also like to thank Emerald Ink for getting behind Top Sportsman in Western Australia as well as Lethal Industries, Allfast Torque Converters, Speed Torque and Connelly Images for their support.”

For more information on that event, please visit www.andra.com.au or www.southcoastraceway.com.au