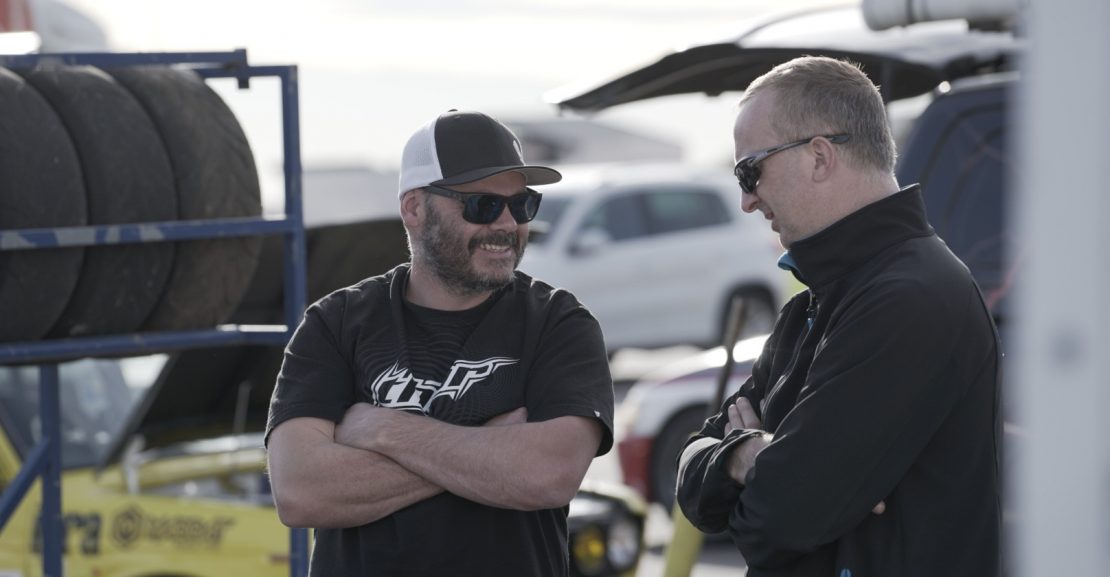 Rob Sharp’s involvement in drag racing has spanned almost two decades and in that time he has worn many different hats: from being an ANDRA supplier to employee to interim CEO and back to supplier again, ‘Sharpie’ is highly regarded throughout the drag racing community for his innovative ideas which have helped promote our sport to the masses.

While the Adelaidean’s love for drag racing started like that of so many others, his professional involvement would grow from somewhat of a chance encounter.

“My involvement in drag racing started the same way as it does for many people, with a trip to the racetrack with my dad,” Sharp explained.

“I was born in Adelaide, so my home track was Adelaide International Raceway before we moved to Victoria, when it became Heathcote Park Raceway.

“Lots of family events in those early years captivated me and began an affinity with the sport, spurred on by how much I enjoyed those events as a youngster.

“When it comes to how I started working with ANDRA, that began in an unusual way when in 2001, then-ANDRA CEO Tony Thornton came into Clemenger BBDO, the advertising agency for which I worked.

“He was seeking some marketing support for the promotion of the Australian Nationals. It was the first event that ANDRA promoted at Calder Park Raceway and after having met Tony, we started a bit of dialogue back-and-forth around the sport and how much I enjoyed it. After helping to contribute in some way to the marketing side of things for the 2001 event, Tony and I formed a friendship.

“A few years later he came to me and talked about the development of Sport Compact racing, which was a hot button topic in the US at the time. I had always liked the little motors and together we created a Sport Compact committee with a whole bunch of people, including Jason O’Halloran who ended up being the Sport Compact Officer.

“Another few years later, I had been at Clemenger BBDO for close on ten years and I was looking for a change. Fate would have it that Tony was also looking for a Communications/Sport Compact Officer and I applied. Following an interview with Tony, Harry White and Kevin Prendergast, I got the nod.”

This new role for Sharp commenced in 2006 and would open an exciting few years working directly for ANDRA.

“The first part of that job was developing an updated website and creating a more consistent communication strategy which incorporated magazines, members, licence holders, promotors and other stakeholders,” Sharp said.

“ANDRA was a very different organisation back then with regard to the various committees and subcommittees and the way in which those operated. Tony walked me through the governance side of things and hopefully, I was able to bring some marketing skill across the board to how things were done.

“After a few years DRAG Ltd came into existence and a good portion of my work became the ANDRA Pro Series as well as the ANDRA Sportsman Series.

“The team worked to develop direct relationships with TV networks and generated sponsorship revenue in what was a really interesting time for the sport.

“We ended up with a standalone, free-to-air, broadcast TV deal that I was very proud of and we had some of the best people on the planet in our TV team including Dean Neal, Chad Neylon, Phil Taylor, Matt Naulty and Nathan Prendergast as well as many more, all working together to create a great product.

“We also had some awesome people in sponsorship with Dale Brittain and a few others and I think that working all together we really helped to elevate the sport to the next level at that time.

“ANDRA and the tracks worked co-operatively to elevate our profile from a media point-of-view and it was a really good time. We had some incredibly capable people working together and that’s one thing I think we always forget – some of the smartest people I have ever met have been in drag racing and I believe the sport always sells itself short.

“When I look back over my years in the sport, that period was probably one of my highlights – creating a standalone broadcast TV deal and facilitating a significant amount of sponsorship revenue was hard, yet very satisfying.” 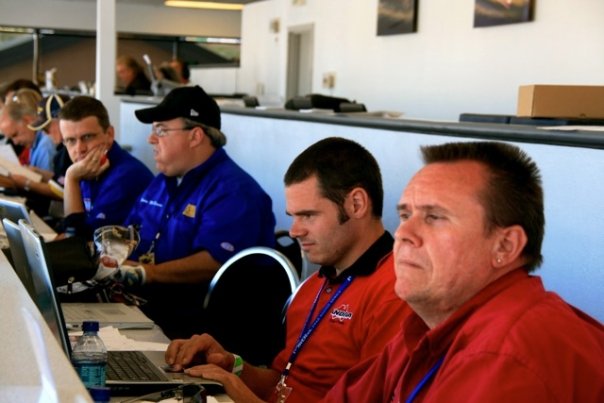 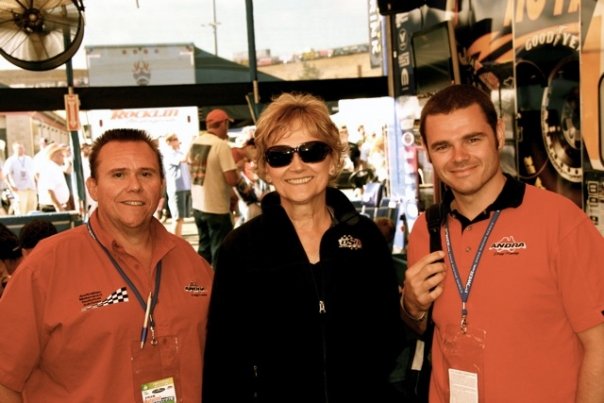 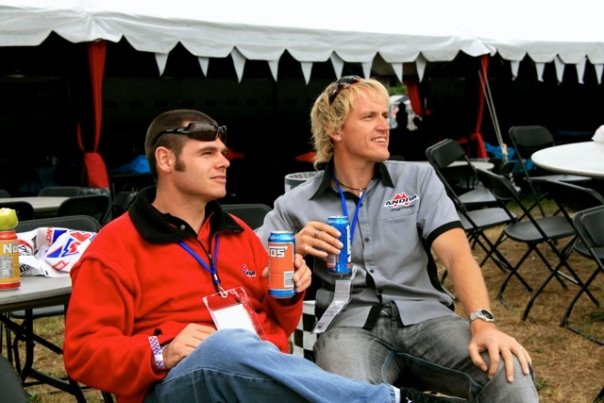 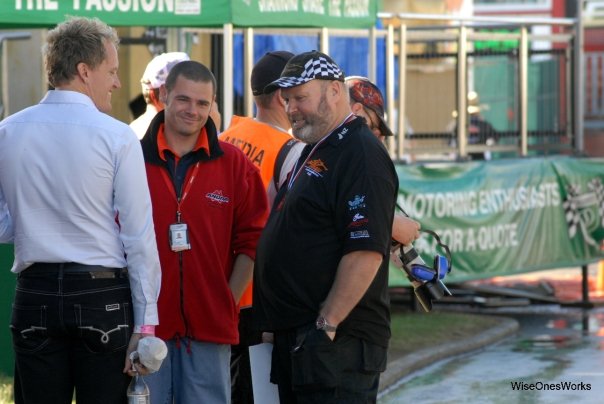 While Sharp would later leave ANDRA to return to ‘adland’ in 2010, he has always remained somehow involved with Australian drag racing.

“After almost four years with ANDRA I got a call to go back to advertising agency land with an offer I could not refuse, so I dusted off the suits and went back to adland,” Sharp said.

“But even though I went back to the corporate advertising agency life, I still kept in touch with drag racing; there are so many people in the industry that I consider great friends which I did and still keep in touch with.

“I guess the person that brought me back to the sport was Phil Lamattina. Phil was a partner in YBI Creative, which is the business I run together with my best mate, Drew Jongebloed.

“When we started YBI together in July of 2011, some of our work was involved around drag racing including working with ANDRA as a supplier as well as some of the tracks to provide media, PR and general marketing assistance.

“Today, YBI Creative continues to be a supporter of not only Phil’s car but also drag racing in general, working with a number of teams, helping create the Aeroflow Outlaw Nitro Funny Cars while also providing support to ANDRA as needed.”

While YBI Creative has been going strong over the past nine years, Sharp did step away from his role as Commercial Director for the company for a few months in 2012 to assist ANDRA during a critical transition point when its then-CEO, Greg Humphreys, resigned suddenly due to health issues in late April.

“The ANDRA Interim CEO job wasn’t one I had in mind initially but with the then-CEO leaving quite abruptly, I was happy to try and help fill the seat and bring things back on track by assisting to source a new person for the role,” Sharp said.

“We employed someone at YBI Creative to take over my workload there temporarily and over a three month period we worked to facilitate a new person into the CEO position and after successfully doing so, I returned back to YBI Creative in August of 2012. While this role was short and unexpected, I did learn a lot during this period and I definitely enjoyed that.”

Looking ahead to the future, Sharp is like all of us very keen to see drag racing events return following the impacts of COVID-19.

“I can’t wait for our sport to come back again – I don’t think anyone realises how much you love and miss some of these events until you can’t go to them anymore!” he said.

“From a YBI Creative perspective, it is certainly an interesting time currently as it is for many thanks to the impacts of COVID-19. Fortunately, we have been pretty okay in the way we have dealt with that, making a few changes along the way.

“A lot of our clients such as Fuchs, Auto One, NGK, Australian Clutch, Kawasaki and others are based in the automotive space which has obviously has been experiencing a bit of a downturn, but we have been working hard to continue to support them through this period as we have with our drag racing clients.

It has been 14 years now since Sharp first took up a direct role with ANDRA and 19 since that first encounter with Tony Thornton, and yet his passion for our sport and its potential into the future still burns brightly.

“I am 43 now and it makes me laugh a little bit to think back to when I started with ANDRA, when George Bailey who was the WA Division Director at the time would make fun of me and call me the ‘cap backwards’ brigade because obviously I had a few less grey hairs in the beard back then,” he laughed.

“When I think about what lies ahead, my main wish for the sport – not just for ANDRA as an organisation but for the sport of drag racing as a whole – is for there to be some sort of a collective direction where everybody is pulling the rope in the same direction, at the same time, with the same goals.

“I know when I speak to Phil and other Group One racers, they would love to see a return to some of the services we offered at ANDRA, such as the really high-level media monitoring service which we offered as part of the Group One license. Unfortunately for these teams this kind of measurement isn’t really available to them these days, which is a shame for them as I feel it plays an important part in helping keep teams racing.”

Unsurprisingly after so many years in the sport, Sharp has quite a few people that he wants to thank for their support along the way.

“I think the key for the good governance for motorsport or sport in general is not really the person in charge, it’s about the treatment of the people who are a part of that community,” Sharp said.

“I have been very proud to have worked with some important people along the way – Tony Thornton, Kevin Prendergast, the late Gary Miosovich, Steve Bettes, Graeme Cowin, Steve Gay, Ken Dickie, George Bailey, Phil Lamattina, Maurice Fabietti and many, many more that know who they are.

“I remain friends to this very day with some of those people including the current ANDRA CEO, Brett Stevens.

“One of my best memories is the late Harry White coming into my office and talking old-school racing stories whilst I would talk to him about the virtues of EFI.

“There’s lots of people I’d like to recognise for their support during my time working with ANDRA. Obviously, there is the head office staff at the time with Kylie Hazelhurst, Jackie Mills and Leanne Wright. But of course whilst we all worked hard to deliver the best results, I can’t say enough about the volunteers – there are so many people who put effort into a drag racing event that it’s impossible to name them all.

“I also want to recognise Greg Schultz, David Baker, Frank Ellis and more than I can name here plus all of the Division Directors and all of the Divisional Council members who put their time into making the sport a bit better. The amount of work that goes into these roles is pretty incredible, especially when you consider that for many of the competitors drag racing is a hobby, rather than a professional pursuit.”

Even when he is not working hard in his business or attending a drag strip, Sharp’s life is still filled with all things automotive.

“My hobbies include pretty much anything with an engine. Whether that is car or bike racing, I just like mechanical things so whether it is watching my son race bikes, or racing cars and bikes with my brother and Dad, I just enjoy motorsport as a whole,” he said.