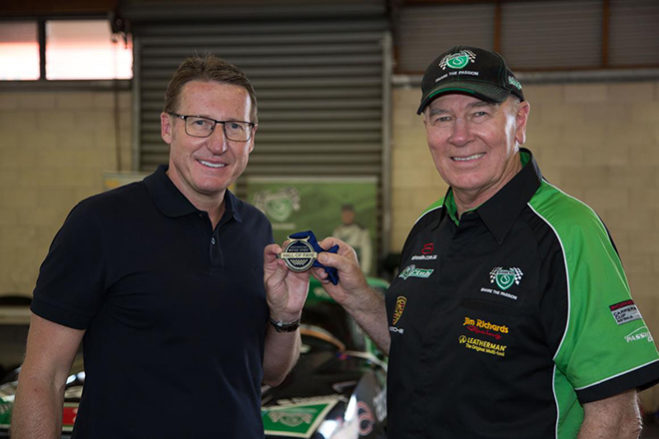 Touring car greats Jim Richards and Mark Skaife have been announced as the advance inductees for the 2017 Australian Motor Sport Hall of Fame which will be unveiled on the Formula 1 Australian Grand Prix weekend in Melbourne in March.…

Touring car greats Jim Richards and Mark Skaife have been announced as the advance inductees for the 2017 Australian Motor Sport Hall of Fame which will be unveiled on the Formula 1 Australian Grand Prix weekend in Melbourne in March.

Fittingly, Richards and Skaife – who were synonymous with each other through the foundation years of touring car racing’s modern era in Australia – will be inducted into the Hall of Fame, presented by Speedcafe.com on Friday night, March 24 at a black tie dinner to be held at the Melbourne Convention and Exhibition Centre.

Richards and Skaife, who were announced as inductees today during the build-up to this weekend’s final round of the Virgin Australia Supercars Championship at Sydney Olympic Park, will head a list of 21 recipients who will join the inaugural list of 30 greats which included legends Sir Jack Brabham, Alan Jones and Mick Doohan.

Whilst the pair have shared victory at Bathurst on three occasions, the 1992 win in the Nissan GT-R in wet conditions and the subsequent presentation to a hostile crowd is an iconic Australian motor sport moment that is talked about as much now – 24 years later – as it was on the day.

Born in Otahuhu, New Zealand, Jim Richards first attempted the Bathurst 1000 in 1974, finishing third alongside Rod Coppins in an LH Torana S/LR 5000. Soon after he moved to Australia, which was the start of a remarkable stretch of domination in many disciplines of the sport.

His CV has few rivals in Australian motor sport history – whether it be touring cars, Superspeedway racing, GT, Tarmac Rally or historic racing – where he is still competitive today.

Richards took three Bathurst wins with Peter Brock between 1978 and 1980 in the A9X Torana. His next Bathurst win would not come until sharing a Nissan GT-R with Skaife in 1991, the pair backing that up in 1992.

After a win in a Volvo in 1998 with Rickard Rydell, Richards’ seventh and final Bathurst victory would come with Skaife in 2002 aboard a Holden Racing Team VX Commodore.

Central Coast NSW-raised Skaife holds six Bathurst 1000 wins and reigned supreme during the most dominant era of the Holden Racing Team, taking three successive Australian Touring Car Championships between the year 2000 and 2002. These three Championships added to his 1992 and 1994 ATCC wins.

Whilst at the top of Touring Car racing, Skaife was also a well-renowned open-wheel exponent winning three consecutive Australian Drivers’ Championships in Formula Holden in 1991, 1992 and 1993.

As well as a Le Mans 24 Hour race start in 1997 in a Lister Jaguar, Skaife holds a Guinness World Record for the world’s fastest recorded speed in a production Ute, getting a Holden Maloo up to 277.16km/h at the Woomera Rocket Range in 2006.

Awarded an Order of Australia medal (OAM) in 2004, Skaife would own the Holden Racing Team from 2003-2008 and is now a leading authority on the sport of Supercars racing through his role with Supercars Media and advisory role on circuit development. He also played a valuable role in the development of the category’s Car of the Future program.

Skaife will line up in a team ironically owned by Richards’ son Steven for the Bathurst 12 Hour in 2017 where he will drive a BMW M6 GT3 with Longhurst and old rival, Russell Ingall.

A limited number of General Admission tickets for the Australian Motor Sport Hall of Fame Induction Gala, presented by Speedcafe.com are now on sale at www.cams.com.au/tickets.

It will be held on Friday night, March 24 (Formula 1 Australian Grand Prix weekend) at the Melbourne Convention and Exhibition Centre at 7:30pm for an 8pm start and tickets are $275 (Inc gst).

Corporate sponsorship packages and group tables are available by contacting Marie Dinsdale at CAMS on (03) 9593 7769 or marie.dinsdale@cams.com.au.