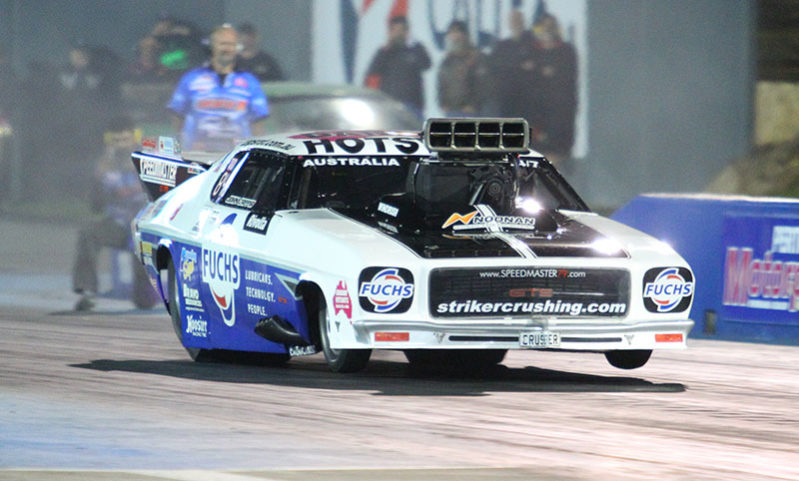 John Zappia might have emerged as the winner of the Goldenstates at Perth Motorplex several weeks ago but it came at a cost with bent rods on two separate runs and a close challenge from Scott MacLean.…

John Zappia might have emerged as the winner of the Goldenstates at Perth Motorplex several weeks ago but it came at a cost with bent rods on two separate runs and a close challenge from Scott MacLean.

Since then, the team has been hard at work on the Fuchs Monaro, developing ways to keep the engine in what Zappia calls the happy zone.

“We have the Fuchs Monaro making plenty of power now but we are closer to the edge,” he said. “We just have to make sure we put enough fuel in it, keeping the motor away from being lean and keeping it in the happy zone.”

With over three thousand reliable, supercharged horsepower up front, Zappia will be able to concentrate on one area that has been something of an Achilles’ heel – his reaction times.

“We will look at all areas that will try and help the car move quicker earlier – along with myself,” he said.

“You’ve just got to be confident in the car that you can drop the clutch and it will do what it is supposed to do. If you are not sure what it will do, you are cautious and your reaction times suffer.

“We have had a pretty good car that goes down the track more often than not, so now I can focus on cutting down the tree.”

After running 5.70 at the Goldenstates, Zappia said a return to the 5.6 second zone is definitely on the agenda, with the weather expected to provide perfect conditions.

“We found that our 60 foot times slowed down as the track got better last meeting and that kept us out of the 5.6s. Our car likes wheel speed so we can put a bit more into the tune up earlier in the run and then we just need the rest of the pass to be hard and fast and we should be there.”

The Westernationals has seen 16 teams nominate for this Saturday and Sunday, the biggest field of Top Doorslammers so far this season. Among them is Kelvin Lyle and his improving Ford Mustang, who Zappia has been assisting with car development.

“You never stop learning, no matter when things go right or things go wrong,” Zappia said. “Kelvin’s car has really come along, he did a 6.01 by the end of last meeting and it was only his 12th run in the car so we are looking for bigger and better things for this meeting.”

Zappia said the fight for the bump spot will be tough.

“The whole bracket will step up and we are going to try and bring Kelvin’s car into the fives as well. He only missed the field by two hundredths last time but I expect the bump will be quicker this time, it might even be an all five second field. We have had five second bump spots here before.

“The Westernationals is a grand event and you know everyone is going to be pushing harder. I just have to be prepared and do my best to keep the Fuchs Monaro out in front.”