RECORD-SETTING FARRELL READY TO BACK IT UP IN ALICE SPRINGS

RECORD-SETTING FARRELL READY TO BACK IT UP IN ALICE SPRINGS 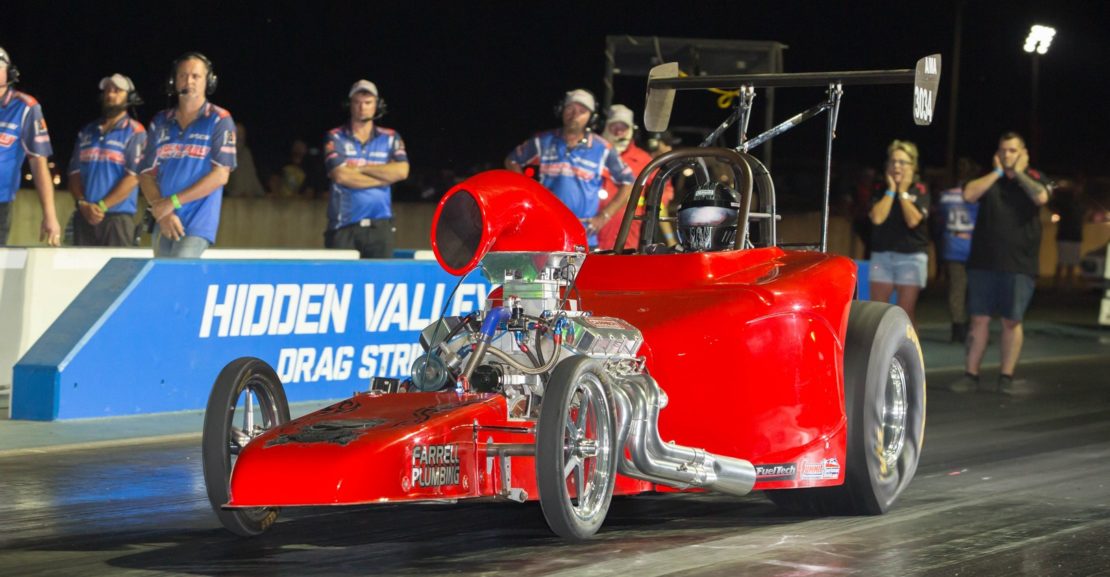 After being the first to set a national record at the Hidden Valley Drag Strip on the weekend, Modified racer Chris Farrell is looking to better his new marker at Alice Springs Inland Dragway’s Desert Nationals this weekend (July 21/22). Farrell reset the national speed record for the A/MA bracket…

After being the first to set a national record at the Hidden Valley Drag Strip on the weekend, Modified racer Chris Farrell is looking to better his new marker at Alice Springs Inland Dragway’s Desert Nationals this weekend (July 21/22).

Farrell reset the national speed record for the A/MA bracket to 188.17miles per hour at last weekend’s Nitro Up North event in Darwin courtesy of blazing performances on both Friday and Saturday. To see the current ANDRA records list, please click here.

Now, the 55 year old racer who celebrated a birthday earlier this week is preparing to do it all again at Alice Springs this weekend for what is round two of the 18/19 Summit Racing Equipment Sportsman Series.

“I was pretty confident we would be able to set the record in Darwin as I tested at Swan Hill Dragway three weeks before the event and I ran a 188.97mph pass as well as a couple of ‘188s’,” Farrell explained.

“As long as the air was good I was pretty confident we could do it, and it was. The track was brilliant too of course and I knew the car could do it.

“When we ran that pass on the Saturday in the first round of eliminations I could feel that we had nailed it. We launched it hard, with the track being good we knew we could wind it up a bit and traction wouldn’t be a problem.

“After that we switched our focus to the racing in round two, but unfortunately, I missed the light – my visor fogged up a bit and I struggled with a light shining on the tree, but that is racing and you just have to learn and be ready next time.

“It is certainly our goal to better the record again this weekend, we will be pursuing that and I know we can do it after our runs in testing. If the air is good and the track is good which they should be, I am fairly confident we can do it.

“I love going to Alice Springs, the first time we went there in 2013 I won in the Super Sedan bracket and it would be great to get a win in the Modified bracket this time around.

“Obviously we are all going there to win, but you can only do the best you can and it is what it is on the day. I think a great goal is to aim for the final; if you make it there you have achieved your goal and the outcome of that run is anyone’s game.

“Aside from going after the record again, that is what we will be focusing on.”

Farrell thanks Daniel Collings Auto Electric, Craig Carrison Race Engines, Matt Despirit Transmissions for their sponsorship of his racing program; his wife Jenny, nephew Joshua and his whole family for their ongoing support; as well as Steve and Leanne Braggs and his South Coast crew who are travelling with him for their support of his racing.

Round two of the 18/19 Summit Racing Equipment Sportsman Series, the Desert Nationals, will be held at Alice Springs Inland Dragway next weekend across July 21 and 22. For more information on that event, please visit www.andra.com.au or and www.cadra.com.au