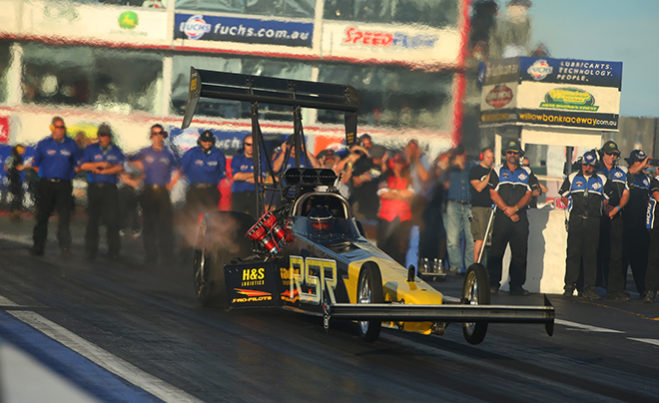 Brisbane-based Top Fuel Dragster pilot, ‘The Pom’ Steve Read wants to ‘make it count’ when he lines up against five of the toughest Top Fuel racers from around Australia at the 3rd annual Santo’s Super 3 Extreme Drag Race presented by Uplift Cranes and Titan Cranes, held at Willowbank…

Brisbane-based Top Fuel Dragster pilot, ‘The Pom’ Steve Read wants to ‘make it count’ when he lines up against five of the toughest Top Fuel racers from around Australia at the 3rd annual Santo’s Super 3 Extreme Drag Race presented by Uplift Cranes and Titan Cranes, held at Willowbank Raceway, Ipswich on Saturday 4th April from 5pm.

“In 2013, we pulled together 6 consecutive 4-second passes and won the inaugural Super 3, taking home the Louie Rapisarda Memorial Trophy, which means an awful lot to me personally, having raced for Santo for 10 years. Racing in Louie’s memory is at the centre of everything Santo does on the race track and for the sport of Championship Drag Racing”, Read said.

While the premise of the Santo’s Super 3 is to promote the ‘short, sharp show’ aspect, this year’s version has gone from a 2 night event to a Saturday night show – a move that Read says makes perfect sense over the Easter weekend.

“Over the Easter long weekend, a lot of people want to maximise those 4 days off and do a lot of different things. With the Super 3 event as a Saturday night-only deal this year, I believe it will help boost fan attendance. There’s just something special about watching Saturday night nitro at Willowbank. Today’s race fans love to go see Drag Racing, or any live event for that matter, but in a shorter time frame, which I think is a real sign of the times we live in”, Read said. “It means a shorter, high intensity show – just like a concert – you’re in and out of there in a few hours”.

Having tasted success at this unique event in its first year, Read is hungry to make this year’s race really count.

“We’re up against two Rapisarda cars, two Lamattina cars and Mark Sheehan’s state-of-the-art new canopy dragster. I’m really looking forward to mixing it up with these guys on track. We have to hit our stride right out of the trailer and be on the pace. The crowd will be in for a hell of a show”, Read said.

The four hour program means that Read and his team need to judge changing track conditions and make tuning decisions quickly, something that ‘the Pom’ knows can have far-reaching effects.

“From 5pm, we’re in game-mode. We’ve won before, and I want this one again. We’re racing on a track surface that doesn’t play favourites – you either get it right, or you’re shaking the tyres and burning up parts”, Read said.

Read hinted that the Team RSR Dragster might also feature a ‘piece of Vegas’ on Easter Saturday.

“We found some damage to our main rear wing after the 2014 Australian Nationals in Sydney. My crew at the workshop have already given the ‘Vegas’ wing a new nickname – ‘The Hangover’, because the last time this rear wing went down the track, it had a bad night in Vegas”, Read laughed.

This time around, Read is hopeful that Lady Luck is on his side once again in front of his home-town crowd.