Queen of speed looking for top 3 at Fuchs Winternationals

Queen of speed looking for top 3 at Fuchs Winternationals 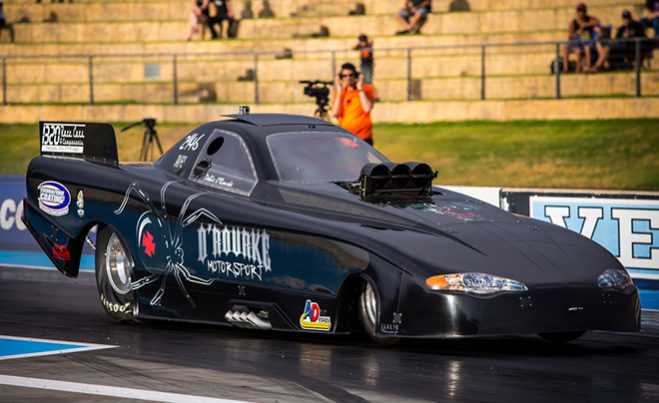 When Debbie O’Rourke arrives at Willowbank Raceway’s Fuchs Winternationals (June 4-7), it will be with a singular goal in mind – a top three spot in the 2015 ANDRA Top Alcohol championship.…

When Debbie O’Rourke arrives at Willowbank Raceway’s Fuchs Winternationals (June 4-7), it will be with a singular goal in mind – a top three spot in the 2015 ANDRA Top Alcohol championship.

The fairer of the husband and wife O’Rourke team of Debbie and Grant is currently fourth in the championship standings as the title chase heads to Willowbank Raceway for its season finale.

With a personal best championship finish of fifth (2014) and only 28 points covering title positions three through seven, O’Rourke is determined to make sure that she snares a new PB when it comes to the title this time around.

“We will be testing this weekend at Willowbank Raceway during the official ‘Winters Warm-Up’ weekend for event entrants, and we will be doing everything we can to make sure we are as prepared and on the money as possible for the season finale,” said Debbie O’Rourke.

“It has been a full-on year for us at O’Rourke Motorsport so to come home with a top three result would be a fantastic way to reward the crew for all of their hard work and our sponsors for their support over the year, and a great way to set ourselves up for the upcoming season.”

Debbie’s crew chief Perry Maxwell has cleared his slate to ensure he can travel from his home in Perth (Western Australia) to be by his driver’s side from this Thursday all the way through until the conclusion of the June 4-7 event – which marks his 20th year as part of OMS.

“I am pleased to be able to make sure that Debbie has my full attention not only at the main event of the Fuchs Winternationals but also during the final preparation period,” said Maxwell.

“The two-day test weekend should be exceptionally valuable to us in our preparation and I am confident that no stone will be left unturned in our pursuit of getting that top three result for Debbie and the team.

After the set back of the robbery earlier in the season, this would be a perfect reward for everyone involved and I am going to do all I can to make sure it happens.”