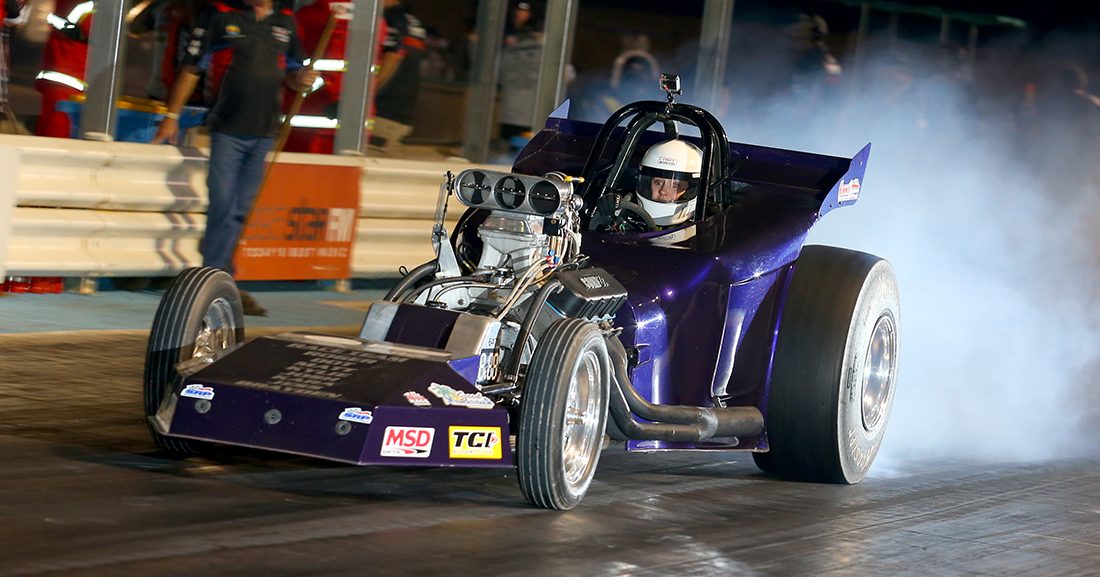 After taking out her first ever ANDRA Christmas Tree at the 18/19 Summit Racing Equipment Sportsman Series opener, Nitro Up North, Jess Proud (nee Voigt) is now leading the way for the Modified bracket heading to next weekend’s ANDRA Grand Final.

The 25 year old from South Australia – who will celebrate her 26th birthday on the Saturday of the ANDRA Grand Final event – originally didn’t plan to chase the season, but her breakthrough result changed all that.

Now, she finds herself on max points and on top of the leaderboard alongside Modified stalwarts Chris Farrell and Adam Mundy heading to the big finale at the Perth Motorplex across April 6-7.

“To be honest we weren’t really concentrating on the Summit Racing Equipment Sportsman Series when we began, I just wanted to get out there and attend as many races as I could,” said Proud, who is supported on-track by sponsors Sherwood Estates, Matt’s Paint and Body shop, Dear Lyla and Mark Lewis Signs.

“To take the win at what was my very first round in the series was absolutely surreal and something that was completely unexpected. I was just excited to be there at a track we hadn’t raced at before and so grateful for the experience. I still pinch myself now and watch the footage to be back there and remember how incredible that felt.

“It was only on the way home from Darwin that we decided to take it a bit more seriously, aim for maximum points and head over to Perth and try our luck – it definitely wasn’t the original plan, but I am so glad it has turned out how it has!”

It has been a strong season for the postal service worker, who first hopped in this car in 2016.

“We went to Alice Spring’s Desert Nationals after Darwin and gained another 60 points towards the series and then it was on to South Coast Raceway. I am quite a regular at the Portland track – it is a six hour drive from where I live but it is a fantastic track and we don’t mind the drive when we know it is going to be quality racing,” Proud said.

“I was the runner-up there in November and had a semi-final loss at their January event – we found out afterwards we had broken a roller lifter during that pass, so dad had some work to do replacing the cam shaft and roller lifters!

“I unfortunately missed out on the Spring Nationals at Mildura due to my Hen’s party, but I was there for the Twilight Nationals in February and we managed to get to the semi-final for another 60 points.

“I am so thrilled to be going into the Grand Final on top of the leader board, it is such an achievement and something I will never forget.”

When it comes to taking out the title, Proud is backing herself while noting the strength of her competitors.

“I am definitely confident in my ability to take out the championship, I have learnt so much in the short time I have been racing and I think I have proven that over this season,” Proud said.

“Both Farrell and Mundy are quality racers – they have shown time and time again that they are a force out on the track so I know I will have to be on the ball coming up against them, but I am really looking forward to seeing how it all unfolds.

“I always try not to get too much in my head about any race that is coming up, but I can’t help but feel a little bit of pressure. If I can go out there and do my job the best I can then that’s all I care about – it is either going to be my time or it is not. My whole family is heading over to watch and it is going to be an incredible weekend with all of us there no matter what the outcome is.

“I am trying to treat this Grand Final just like I would any other round, as I think if I focus too much on the fact that it is the final I will just psych myself out and I won’t enjoy the experience for what it is. This will be one of the last times I will race the Altered so I just want to take it all in and have some fun while I can.”

Proud’s Altered was purchased by her father Roger with a blown engine in it which was switched out for a 496 big block Chev. Proud’s brothers have each also enjoyed a few seasons racing the car and after this season, she will hand the car back to her dad who will reinstate the blown engine so he can race in Supercharged Outlaws.

“At this point the Easter event at Mildura will be my last event before dad puts the blown motor back in the car so he can race it. It has always been a dream of dad’s to race a blown car so I am really looking forward to seeing him get back into it,” Proud said.

“I was only four years old when he won the Nationals for Modified in 1997 and he stopped racing when I was still young, so it will be awesome to see him have a go again. At the same time I would love to one day be able to get back out on the track with my very own car.

“I am so incredibly grateful to my Dad, he does absolutely everything himself and he works so hard to allow me to do something that I love, I owe him so much for this whole journey I’ve been on.

“I also want to thank my Mum for being so supportive – she is at every race no matter what – my husband Brayden for coming along for the ride; my brothers Matthew and Josh and their wives Kylie and Kara for coming along to crew when they can as well as all of my friends and extended family who are always so proud to see what I’ve accomplished.”