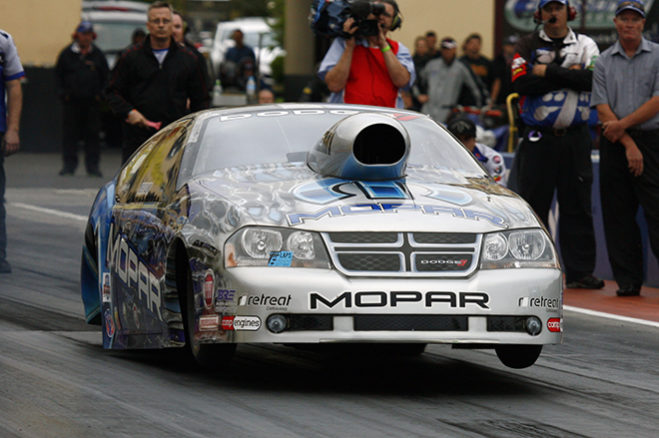 Pro Stock, considered by many as the “drivers category”, promises to deliver the goods when the Australian Nationals return to Calder Park Raceway for the first since 2001 on January 23-24.…

Pro Stock, considered by many as the “drivers category”, promises to deliver the goods when the Australian Nationals return to Calder Park Raceway for the first since 2001 on January 23-24.

Bektash could be seen as the early favourite to win the ANDRA Gold Christmas Tree but the field is wide open as Chris Soldatos, Nick Xerakis, Bill Kotsias, Bruce Leake, Gerry Parente, Bill Perdikaris and Jodi Racco round what is expected to be a shootout.

“In Pro Stock everyone is a threat but Nino, Wayne Daley or anybody out there promoting this Mopar brand is never a threat, this brand is the priority!” said Bektash.

“(It’s) not who will win or lose or who is faster as long as the Worldwide Mopar Family gets rewarded with any reward, that’s my priority and my view being supported for the last eight years by the brand.

“Bill Perdikaris beat Aaron Tremayne in Sydney because of whatever reason and not taking anything from Bill but we all know that Aaron is the best Pro Stock racer of the current climate. We are split by 1.5 tenths in qualifying and it’s a credit to the teams

“(It’s) great to see some old names who I’m sure would like to give us faster guys a touch up no doubt.

“The only thing any category can do to keep it alive is to support it. Pro Stock is by far the most expensive class to run in Drag Racing behind the scenes (i.e. development and research).

“I believe teams have put one to three seasons aside and concentrated on development or even business commitments which is what makes a Group One operation.”

Bektash has never won the Australian Nationals in his hometown Melbourne. And he would like nothing more than to do so in front of his friends, family and supporters. But he also has his eye on the bigger picture.

“I was in the (Super Gas) semi-final against Matt Forbes in the staging lanes at the 2001 Racers Nationals (in Melbourne) before it was cancelled (due to weather).

“It would be nice to do well in front of sponsors, family, friends and the Melbourne crowd, but I think as a group it would be more important to show how close and tight Pro Stock is and put on a nail biting performance as a category.

“No doubt this will be the biggest event for Peter Pisalidis and right hand man Ray Treasure who is the best in the business.

“The entry list will prove that and hopefully if we all help out by spreading the word and inviting sponsors, family and friends – plus the diehard Drag Racing fan who would like to see some Group One action that hasn’t been there for many years on the same weekend.

“I wish everybody all the best and looking at the weather my tip will be that the Nationals will attract 7-10k people per day.”