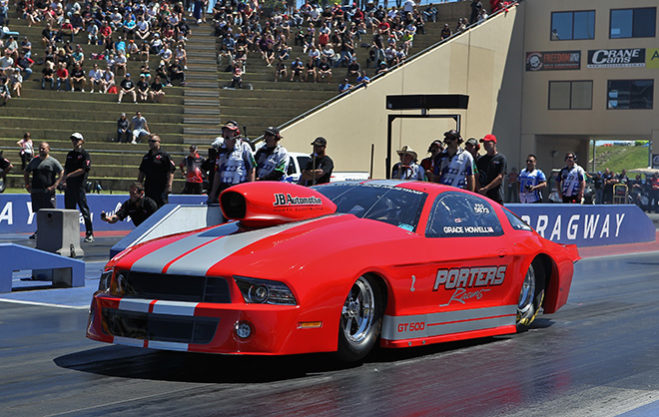 Porters Racing along with JB Automotive North Queensland have announced a joint engine development program with Bob Book of Book Racing Enterprises (BRE) based out of the USA.…

Porters Racing along with JB Automotive North Queensland have announced a joint engine development program with Bob Book of Book Racing Enterprises (BRE) based out of the USA.

John Barbagallo and Bob Book have been working together for over 20 years dealing with carburettors, engine tune ups and have just now taken a big step forward in research and development of Ford pro stock engines.

Book has recently been the leader in Australian Pro Stock engine advancement (building the engine which ran the first recorded 200 mph pass and setting the ET record at 6.87). With his knowledge and John’s Ford engine building expertise and racing experience (building the engine that went recorded the first unofficial 6 second Pro Stock pass in Australia and multiple national event winner), the pair are certain to be a strong force in the field of competition both in Australia and in the USA.

“It’s great to further a relationship with another great engine builder, especially being able to share resources from half way across the world, which gives us both an edge in the competitive world of drag racing”, said Book, “I’ve been fortunate to have success in the Australian Drag Racing scene and with this connection can further our successes in both countries.”

Barbagallo is equally excited about the program saying that he feels that with this conglomeration, Porters Racing team and his own will have the opportunity for great success in 2015 and beyond.

“Bob has been a good friend of mine and it’s great that we can share our expertise in engine building which in return will be of great benefit to our customers.” he said.

Paul Porter said he believes this is a positive step for all parties involved and looks forward to the coming season debuting the new JB Automotive/BRE engine alongside John and his race team.

“To have the opportunity to work with two guys of this calibre can only increase the level of competitiveness of Porters Racing and to ANDRA Pro Stock Drag Racing as a whole,” said Porter.

The opening round of the 2015 Australian Pro Stock Championship will take place at Adelaide International Raceway on March 14-15.