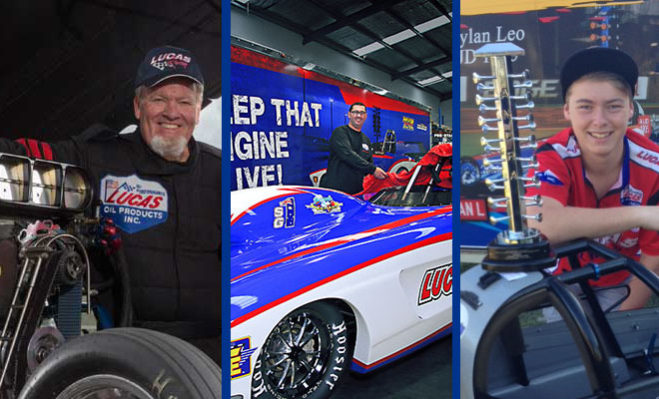 A trio of challengers is all-set to make headlines at this weekend’s prestigious Australian Nationals, with Lucas Oil’s Gary Phillips, Matt Forbes and Dylan Leo all gunning for glory at drag racing’s glittering final round.…

A trio of challengers is all-set to make headlines at this weekend’s prestigious Australian Nationals, with Lucas Oil’s Gary Phillips, Matt Forbes and Dylan Leo all gunning for glory at drag racing’s glittering final round.

For two of them, another championship is up for grabs – with Phillips in the box seat for a record-17th Top Alcohol crown, while Forbes is focused on taking back-to-back titles in sportsman class Super Gas.

15-year-old Junior Dragster pilot Leo completes the Lucas Oil line-up, and while the championship is out of reach, the round win is well within his grasp.

For Phillips (pictured above with son Cheyne and wife Debbie), who goes into the final round 61 points ahead of his nearest rival Steve Ham, there’s only one way to approach the Top Alcohol title showdown – by locking down all the details pre-event.

“You have to approach it in a logical and pragmatic way,” said Phillips, who will be running a striking new livery at the final event.

“So, ticking all the boxes is the plan. We won our 11th Australian Nationals last year, along with the championship – so we’ve got plenty of experience in these situations, managing the fine details.

“Naturally, winning a 17th Top Alcohol title would mean everything. No one in any class has won that many championships. It would be an achievement, and make me the most successful racer out there.

“It would be fantastic to win the Australian Nationals for the 12th time, but the championship is my focus.”

Phillips knows the value in winning Australia’s oldest and most prestigious drag racing event, with stiff competition expected from the outset.

“It’s really is a must-win event – and there is serious kudos in winning it, because everyone is on their game right from the start,” he said.

“The target is on our back as the Top Alcohol championship leader, so that’s why I have to make sure I’m inch-perfect with everything I do. If you go out there and worry about what others are doing, that’s when you make mistakes.”

In Super Gas, Matt Forbes is the championship leader in his new Lucas Oil ’57 Corvette Roadster, which won on debut at the Springnationals earlier this month.

Forbes, who comes to the event on a 28-round winning streak, is no stranger to taking the title down to the wire.

“We raced at the Australian Nationals last year and won,” Forbes said.

“That’s where my pre-event mental preparation paid off. I didn’t crumble under pressure, despite the fact the final round was worth two ANDRA gold Christmas trees, the most-wanted award in Australian Drag Racing.”

Forbes knows how effort goes into putting a championship campaign together across a 12-event calendar that extends from January to November.

“It would mean everything to me and the team to win both back-to-back Super Gas titles and the Australian Nationals,” the Lucas Oil-backed racer said.

“It’s everything that we’ve worked towards over the course of the season. We work hard both at the factory and at home, prepare the car, research the data, run Lucas Oil products, and use the best tools and equipment.

“For every lap we do, there’s 50 hours at home going into it. Between each race meeting we spend a lot of time looking at every single aspect of our operation.

“We’ve had dominating performances all year, so I would like to think it would be the exclamation mark at the end of the season that shows we were the form team and we were able to go to the finals and close the deal.”

Joining Phillips and Forbes, as part of Lucas Oil’s Australian Nationals’ attack, is teenager Dylan Leo who competes in the Junior Dragster class.

The 15-year-old, who has been racing for six years, is not underestimating the size of the challenge ahead of him.

“But the Australian Nationals will be tough because of the quality of the field – we’ll have the best drag racers from all over Australia competing.

“To prepare, I’ve been practicing my reaction times for an hour every night. I’ve got a practice tree at home that replicates what we do in the Lucas Oil dragster, with the dash and pedal setup so I can simulate the experience closely. I’m doing all I can to make sure I’m in top form going into the event.

“It certainly feels great to be part of the Lucas Oil team, and to represent a global brand alongside its top drag racers Gary Phillips and Matt Forbes.”

Qualifying for the Aerolfow Sportsman Drag Racing Championship gets underway on Friday October 31st from 9am with eliminations to commence from 10am on Saturday November 1 and continue through Sunday November 2 from 9:45am.