Phillips and Muscat Taste Victory In The North

Phillips and Muscat Taste Victory In The North 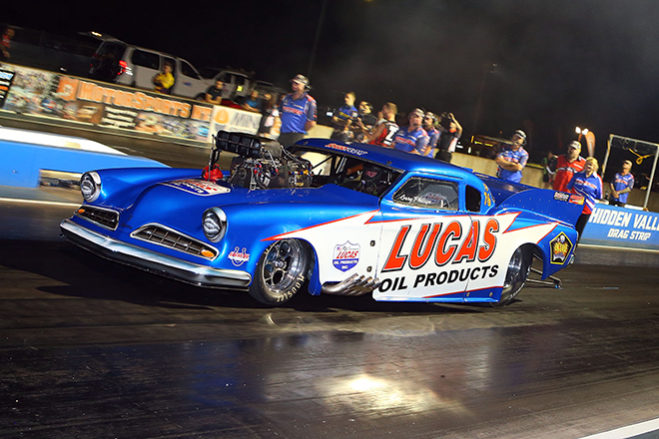 Gary Philips and Damien Muscat have each overcome some tricky runs to take the Nitro Up North Top Doorslammer and Top Fuel Motorcycle event victories this weekend.…

Gary Philips and Damien Muscat have each overcome some tricky runs to take the Nitro Up North Top Doorslammer and Top Fuel Motorcycle event victories this weekend.

For Phillips, it was a slippery run to the event win, but he held on to take the victory from Mark Belleri with a 5.949s/245.36mph effort to Belleri’s 6.473s/165.76mph result. On his way to the final, he faced and defeated Ben Bray (semis) and Sam Fenech (round one), while Belleri took on John Zappia and Victor Bray.

“That was great. I love coming up here, it is fantastic, it is just a pity it is so hot!” said Phillips, who along with his fellow Top Doorslammer racers will also compete in next weekend’s Desert Nationals (Alice Springs, 16-17 July).

“The car was good and we come up here with the attitude – especially with Alice Springs next weekend and the Northern Territory Government doing an awesome job up here helping out – of putting on a great show for the crowd and they were just fantastic – tonight there was the most people I have ever seen here before, it was really good.

“For Lucas Oil and Speedflow and everyone else that helps us, we didn’t back into this one, this was an earned deal.

“The car ran well, we didn’t hurt anything. We used the same oil all weekend, put fuel in it, and changed the plugs. It was really good.

“Race day today was great. We had a bit of selected shuffling with qualifying which is why we didn’t do the last session, as we looked at the ladder and said we can run 90 and we know it can go faster. It was a bit of a Russian roulette type of deal, but it played out well and every run was great.

“In the final, I got a bit of oil under the tyre and it got really close to the wall, as in the semi-final the rear cover in the transmission had vibrated loose and I didn’t pick it up. But then it went 9.7060. It went 9.70 something in qualifying but I didn’t believe it as we didn’t back it up, but then it went ‘80’ and ‘82’ and then 9.70 and we don’t try and go that fast. But the old pig gets twenty seven hundred pound – it is the motor out of the Funny Car and it showed its colours today.” 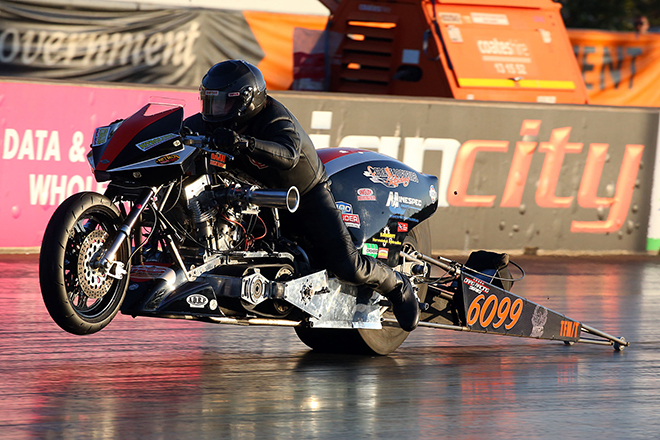 For Muscat, the victory comes after qualifying sessions he would rather forget. However, it wasn’t enough to hold him back from taking wins from Greg Durack (round one) and Chris Porter (semis) on his way to the final against Mark Drew – where his 6.514s/218.94mph effort would better Drew’s 7.020s/228.65mph pass.

“This feels unreal. It couldn’t be better. We had a bad start in qualifying, it took us a bit to get a handle on the tune-up, but we just started stepping it up in eliminations and here we are,” said Muscat, who was third fastest at the end of three qualifying sessions on Friday.

“The rest of the race day went pretty good. I am lost for words as to what actually happened in our qualifying sessions – we missed one run as we had a rookie mistake and left the fuel pump out and didn’t put it back in so one was a cancelled run, and the other two were a 7.1s and a 7.04s I think.

“We went 6.51 in the final which might be low ET, it was great to have the bike turn around, and a big thanks to our sponsors and crew and everyone.”

While the Group One racing provided plenty of action for the packed house at Hidden Valley, there was also plenty of other action on-show across the evening, including championship racing for Summit Racing Equipment Sportsman Series and thrilling exhibition passes from both Outlaw Nitro Funny Cars and Top Fuel racers. 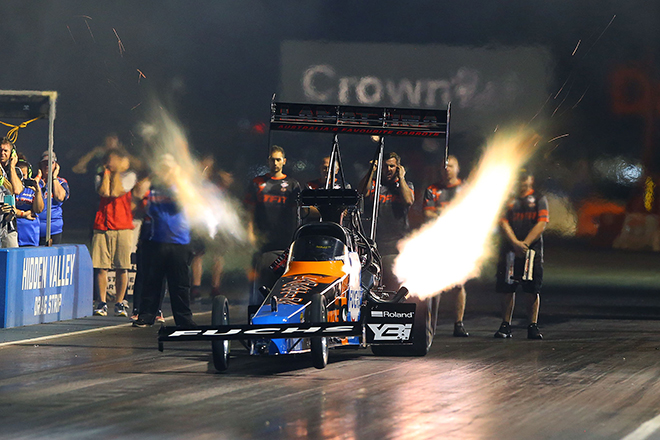 In fact, Aaron Hambridge and Wayne Newby ensured the night concluded with as much excitement as possible by punching out side-by-side 4.61 second passes in their Top Fuel dragsters, with Hambridge setting a 4.610 second effort at 336mph, while Newby traversed the track in 4.614s at 289.57mph – one of the quickest side-by-side passes in Australia to go alongside Damien Harris’ earlier 4.581 second pass at 321.73 mph – a new Hidden Valley Drag Strip track record.

ANDRA congratulates the Hidden Valley Drag Racing Association on a fantastic event and thanked the volunteers for their outstanding efforts prior to and throughout the weekend.

ANDRA Drag Racing in the Northern Territory continues next weekend, with Top Doorslammer and the Summit Racing Equipment Sportsman Series heading to Alice Springs Dragway for the Desert Nationals – to be held across Saturday 16 and Sunday 17 July, 2016.