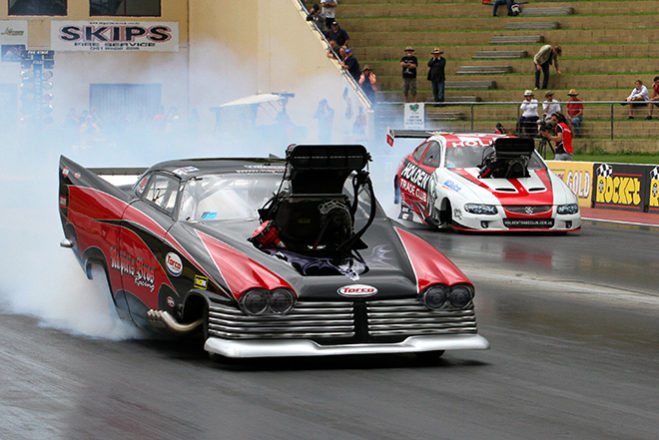 Add to the mix that the Australian Nationals return to his home track of Calder Park Raceway January 23-24 for the first time since 2001, he can hardly contain himself.

A National Champion in 2002 and previous winner of the Nationals, Kapiris describes the race as the ‘Wimbledon of Australian Drag Racing’.

“Calder Park is the home of drag racing and the spiritual home of the Australian Nationals,” says Kapiris.

“When I first won the Nationals I was overwhelmed by the amount of people that called and said congratulations that it didn’t even sink in until 2-3 years later.

“And I realised guys race all their lives and don’t win the Nationals. To say what does the Nationals mean? Well, it’s the pinnacle.

“It’s like Wimbledon. The prestige, it’s the Wimbledon of Aussie Drag Racing.

“I won the Australian Nationals when it wasn’t at Calder, which was huge. But to win one at Calder in front of a home crowd, friends and family – that would be something else. It’s like playing the Grand Final in Tasmania. You want to play the Grand Final at the MCG!”

To win “Wimbledon” Kapiris will need to be at the top of his game with the Nadal to his Federer – 8-times ANDRA Drag Racing Series Top Doorslammer Champion John Zappia – aiming to extend his Series lead in a bid for a record ninth Championship.

While Zappia can run consistent 5.7 second passes, it’s the start line where he has shown some vulnerability recording slower reaction times compared to his rivals.

Team Manager Jeff Cutajar says that is where the race is often decided as they hope to run consistently in the 5.8-second zone while getting a jump on their opponents at the tree.

“I believe that Doorslammer has become so competitive now that wherever you are you have to be sharp on the tree,” said Cutajar.  “That’s where you can win or lose.

“We’re not going to run any different at all. We know the guys at Calder are doing their very best to give us a great track so we’ll keep the same set up in the car and tune it accordingly to the track.”