Parente on the comeback trail after long absence

Parente on the comeback trail after long absence 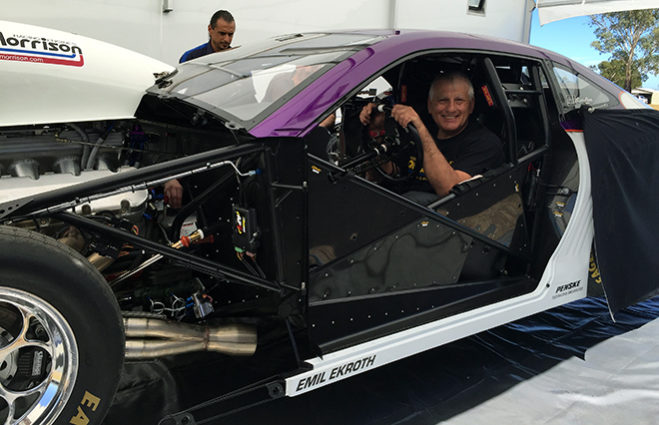 The VPW Pro Series 1000 at Adelaide International Raceway this weekend marks the return of Gerry Parente to ANDRA Championship Drag Racing after an absence of at least 14 years.…

The VPW Pro Series 1000 at Adelaide International Raceway this weekend marks the return of Gerry Parente to ANDRA Championship Drag Racing after an absence of at least 14 years.

Armed with a brand new Camaro fresh out of the United States, Parente is excited to get behind the wheel and compete in a Pro Stock class that has taken giant leaps since his last appearance with the first sub 6.9-second pass and first 200+ mph pass in Australia set at the 2014 Australian Nationals by Lee Bektash.

“Pro Stock has indeed changed since we last raced,” says Parente. “The fundamentals are the same, but the margins for error are even smaller than they used to be, if that is even possible!

“Our goal is to be a front runner and compete for wins in Pro Stock. However, we do not underestimate the work our competitors have done to be competitive in Pro Stock.

“We have aligned ourselves with very good partners in Reher Morrison Racing Engines, Aronson Motorsports and RJ Race Cars to ensure we are continually developing a program which we believe will put the Camaro in a position to compete for wins.”

Parente originally decided to step back from drag racing when family and business commitments coincided with the temporary closure of Adelaide International Raceway to put a pin in his racing career.

Now that AIR has been alive and kicking as an ANDRA Championship venue since 2012, Parente felt the time was right to launch a comeback.

“With my three boys taking an active role in motorsports, my family and I began discussing our return to Pro Stock a couple of years ago,” he said.

“After a couple trips to the Australian Nationals in Sydney and the Winternationals in Queensland, we decided that the time was right for us to re-enter the sport.

“It has been a long process putting together everything required to race, but we are ready to go.

“I cannot overstate my excitement. My family and I are passionate about Pro Stock drag racing and are relishing the opportunity to get back on track and compete with Australia’s best.”

The event will also serve as Round 3 of the Summit Racing Equipment Sportsman Series.

Action gets underway from 9am both Saturday and Sunday. For more information please click here.