O’Rourke: We want to buy John Zappia a boat

O’Rourke: We want to buy John Zappia a boat 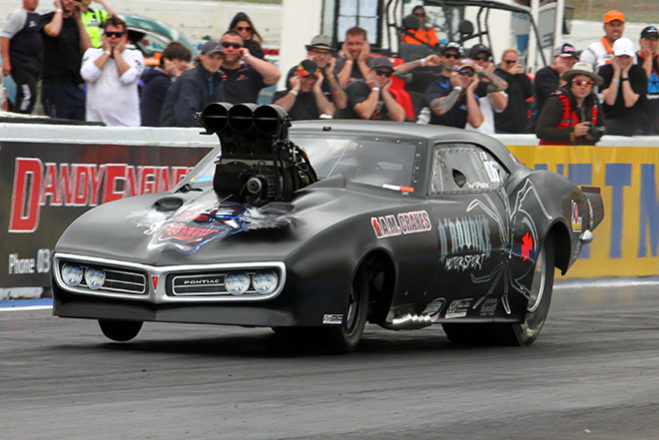 Grant O’Rourke has suggested he and the chasing pack in the ANDRA Top Doorslammer Championship will come together to buy John Zappia a boat so he can enjoy some time off while they fight it out for Championship honours.…

Grant O’Rourke has suggested he and the chasing pack in the ANDRA Top Doorslammer Championship will come together to buy John Zappia a boat so he can enjoy some time off while they fight it out for Championship honours.

“It’ll be exciting (this Saturday), we all decided we’d chip in and buy Zap a boat so he can go boating and then next year it’ll actually be a competition,” said O’Rourke.

“But there is me Kapiris, Belleri and Cannuli. All the bullsh#t aside if you pull Zappia out of there it’s awesome but he’s there and he does what he does and that’s that.”

O’Rourke and Zappia have seemingly been paired more than any other during qualifying and eliminations the past few seasons.

Although Zappia has had the upper hand on many occasions, O’Rourke has claimed his share of scalps including a dramatic win in the final of the 2014 Spring Nationals at AIR.

This season O’Rourke Motorsport has taken some giant leaps forward with a personal best 5.79-second pass in qualifying at Hidden Valley last year and the first ever 5-second pass by a Top Doorslammer at Calder Park Raceway this past January.

“I’ve said this before but you’re only as good as the people around you. Deb and I have put it all together but it’s a case of everyone working together.

“Three of the crew came from Robin Judd’s team – two of them had worked with me back in the Torana days – and the other one has been around for 20 years.”

The current success has come relatively quickly since O’Rourke’s return to racing in 2014 but they are exactly where he expected the team to be given the knowledge, know how and experience at their disposal.

“Can I be cocky enough to say yes (I expected to get these results)? I wasn’t coming back to racing to be number 15.

“We’ve had our moments and spent the money, you’d probably put us top three, but somewhere between second and fourth is guaranteed between Kapiris, Belleri and me. One of us has consistently been number two the past three seasons.”

O’Rourke, Peter Kapiris, Mark Belleri and Paul Cannuli will play the spoiler as all four battle it out in a full field while Zappia bids for a record ninth ANDRA Top Doorslammer Championship in a row this Saturday March 12 at Calder Park Raceway.