O’Rourke ready to Spring into action at AIR

O’Rourke ready to Spring into action at AIR 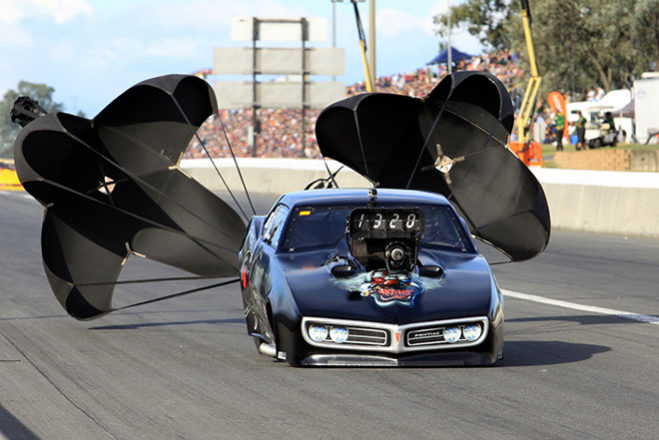 The O’Rourke Motorsport show will soon be on the road to Adelaide International Raceway, where Grant O’Rourke and his Pontiac Firebird Top Doorslammer will compete in the Fuchs Spring Nationals this weekend October 4-5.…

The O’Rourke Motorsport show will soon be on the road to Adelaide International Raceway, where Grant O’Rourke and his Pontiac Firebird Top Doorslammer will compete in the Fuchs Spring Nationals this weekend October 4-5.

The 44 year old is currently locked in an intense battle with Peter Kapiris for third position in his first full Top Doorslammer season in nine years, leading Kapiris by just 15 points with two rounds of racing still to be held.

In preparation for the Spring Nationals, it has been a busy Winter break for the husband and wife O’Rourke Motorsport outfit, with a new workshop built and a new sponsor welcomed to the team in QCS Group.

“Since racing in Darwin in July, we have been hard at work having a new workshop built to house our transporter, both of our race cars and supply an ample working area as well,” said O’Rourke, who sat out the last nine seasons to focus on his wife Debbie O’Rourke’s Top Alcohol Funny Car racing program.

“We have also been working hard on the establishment of a website for the team and of course on car prep and working with sponsors. The QCS Group is a fantastic company and we are really excited to be working with them throughout the rest of the year and hopefully for seasons to come.”

QCS Group Director Stuart Auld said he was excited to see the new partnership in action at the Spring Nationals.

“The QCS Group is proud to be partnering with O’Rourke Motorsport for the remainder of this year and hopefully beyond,” said QCS Group Director Stuart Auld, whose company assists companies to get the utmost out of their IT infrastructure to significantly reduce their downtime and therefore, their costs of doing business.

“We like to think there is an association between the speed of the O’Rourke Doorslammer and Funny Car and the speed with which our techs arrive on site to rectify any IT issues you might be experiencing, and are excited about working with the team to ensure their web hosting and IT support needs are well looked after so they can concentrate on racing.

“We are looking forward to seeing Grant in action in Adelaide on the 4th and 5th of October!”

While the past seven seasons have seen most of Grant’s focus on Debbie’s racing program at ANDRA Group One events, this time around it is Grant who will have Debbie’s undivided attention, with her bracket not contesting the Spring Nationals.

“As far as the Spring Nationals go, I will be doing everything I can to make sure I secure that third place in the championship standings in what is my first full season back in Top Doorslammer after nine years on the sidelines,” said O’Rourke, who will be driving his own Doorslammer and that of Bill Goonan in the O’Rourke Motorsport transporter to AIR in the company of Perry Maxwell – co crew-chief for Debbie’s Funny Car and long-time friend of the O’Rourkes.

“We only finished the Pontiac two weeks before the first round of the season in Perth, so to be in the top three is a great testament to the work of everyone involved with this program.

“With the Top Alcohol bracket Debbie competes in not running at this event – I will have her undivided attention on my race program, and between us we will be leaving no stone unturned.”