O’Rourke puts a bow on his ANDRA Championship season

O’Rourke puts a bow on his ANDRA Championship season 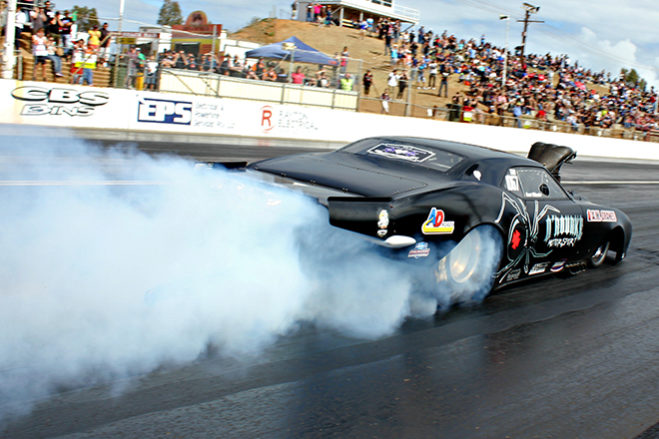 Grant O’Rourke made sure he rounded out the 2015/2016 ANDRA Top Doorslammer Championship season with a bang, taking victory in the ANDRA Championship Grand Final event at Adelaide International Raceway.…

Grant O’Rourke made sure he rounded out the 2015/2016 ANDRA Top Doorslammer Championship season with a bang, taking victory in the ANDRA Championship Grand Final event at Adelaide International Raceway.

The victory saw him secure the runner-up spot in the championship by just 61 points behind nine-time champion John Zappia.

“What a great way to cap off the season for all of us at O’Rourke Motorsport,” said O’Rourke.

“We came to Adelaide to win and to do all that we could to chase Zappia down. We pulled out all the stops so to come away with the win was very satisfying for all of us.”

The result capped off a strong season for the ex-pat West Australian who now resides in Brisbane, including three final-round appearances, two top qualifying performances, a run into the ‘5.70s’ and completed the first ‘five second’ pass at Calder Park Raceway for the bracket. He also took away ‘1.5’ event wins. O’Rourke explains:

“At Calder Park Raceway we made it to the final round however the weather had other ideas and between myself and my finals competitor Mark Belleri we made the call to not race the final and ‘share’ the win,” said O’Rourke.

“It was disappointing not being able to finish the event at Calder Park of course and that we weren’t able to run the final during one of the qualifying sessions of the Adelaide event, but that is just how it goes sometimes.”

The season started all the way back in July in Darwin, before travelling to Sydney Dragway, Calder Park Raceway (Victoria) and Adelaide International Raceway.

“It has certainly been a huge year for all of us in the team and also for drag racing in general,” said O’Rourke.

“There has been a lot of political upheaval over the past 12 months and as a team, as a driver, and simply as lovers of drag racing, everyone at O’Rourke Motorsport is hoping that the issues are resolved for the good of the sport very soon so we can all move forward together.”