O’Rourke Motorsport to fire up at Gold Coast 600

O’Rourke Motorsport to fire up at Gold Coast 600 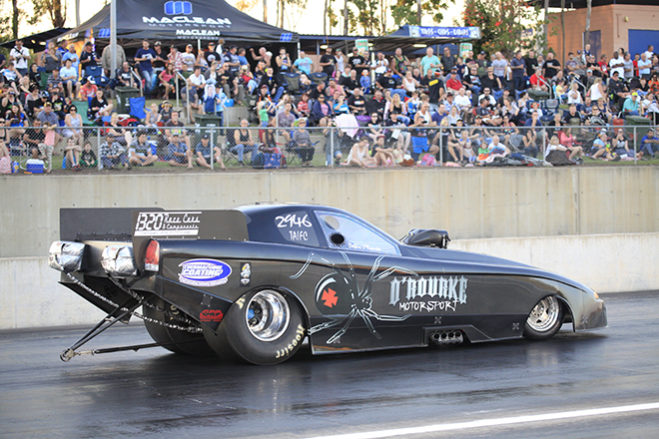 When the Castrol EDGE Gold Coat 600 fires up on the Gold Coast this weekend, it will do so with a touch of drag racing’s dramatic flare thanks to the return of the Friday Night Drags, featuring O’Rourke Motorsport.…

When the Castrol EDGE Gold Coat 600 fires up on the Gold Coast this weekend, it will do so with a touch of drag racing’s dramatic flare thanks to the return of the Friday Night Drags, featuring O’Rourke Motorsport.

Twenty of Australia’s top level drag racing cars will feature in the official on-track entertainment activity on the main straight of the Surfers Paradise street circuit, including Grant and Debbie O’Rourke in their Top Dooslammer and Top Alcohol machines.

“We are really happy to be involved in what is the premier V8 Supercar event in Queensland, and one of the stand-out events on the national V8 Supercar calendar,” said Grant O’Rourke.

“The Friday Night Drags is a great concept, and both Debbie and I are really looking forward to putting on a display with our fellow racers to a crowd that perhaps might not have seen our kind of cars in action before.

“Hopefully we can do a good job of showcasing the sport of drag racing, while giving the fans plenty to cheer about!”

As well as appearing in the Friday Night Drags, the husband and wife team will also be on-display for both the Saturday and Sunday of the Castrol EDGE Gold Coast 600 – setting up shop in the Ferny Avenue section of the race precinct.

“Our association with the Castrol EDGE Gold Coast 600 doesn’t end with the Friday Night Drags, as we will be setting up a display on Ferny Avenue for the weekend as well to try and bring people closer to our sport,” said Debbie O’Rourke.

“Both of our race cars will be on display for fans to look at and even sit in, and Grant and I will both be there to talk about our racing and the sport overall.”

The Friday Night Drags come one week ahead of the O’Rourkes’ next scheduled ANDRA appearance at the Australian Nationals – the final round of the 2014 season – to be held at Sydney Dragway across Friday October 31 to Sunday November 2.

Both Grant and Debbie will be competing at that event, with Grant currently third in the Top Doorslammer championship standings while Debbie sits fifth for Top Alcohol.