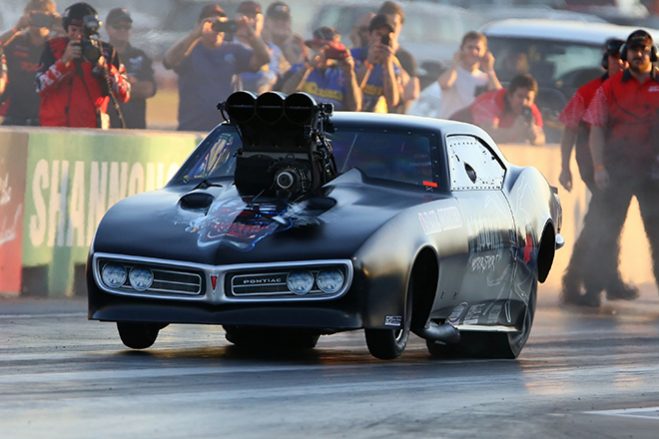 Following some great success in the Top End, Grant O’Rourke and O’Rourke Motorsport are heading south for the East Coast Nationals – to be held at Sydney Dragway this weekend (7-8 November).…

Following some great success in the Top End, Grant O’Rourke and O’Rourke Motorsport are heading south for the East Coast Nationals – to be held at Sydney Dragway this weekend (7-8 November).

While the Sydney venue has not been a happy hunting ground for the Top Doorslammer racer in the past, the ex-pat West Australian that now resides in Brisbane is hopeful of carrying the momentum from the two Northern Territory rounds held recently through to his southern escapades.

“In Darwin we managed to top qualify and become one of only three drivers that will compete this weekend that have run a 5.7 second pass (alongside reigning champion John Zappia and Peter Kapiris),” said O’Rourke, who has remained in Darwin for the majority of the time since that event as he builds a new race car transporter for fellow drag racer Scott Maclean.

“Being able to run at that level has meant that our team is now amongst the elite of the Top Doorslammer class. We are very proud of that and are hoping that we can carry this recent momentum through to Sydney this weekend, where hopefully we can lead the pack looking to hunt down Zappia.

“We have made no change to the car since Darwin, and we will be keeping a keen eye on the weather – it would be perfect for us if we can have similar conditions to those that preceded the Winternationals in June, and so far it is looking like that could be the case.

“No matter what the conditions though, we have 16 Top Doorslammers entered for the event, and it is going to be a tough field.”

OMS will be part of a strong contingent of Queensland racers heading to the popular event.

“Joining us in representing the Sunshine State will be Ben Bray in a car with a new livery, as well as Andrew Searle who will be making his comeback to the Doorslammer bracket after 13 years with a new 67 Mustang body on Ben Bray’s old Monaro chassis,” said O’Rourke.

“When I made my comeback after eight years away, it only took me one pass to get back in form, so based on that I am forecasting that Andrew may need two. With his previous experience and driving, he will not be one to be discounted.

“Victor Bray won’t be racing but he will be on-hand tuning and preparing Ben and Andrew’s cars, so really, all we are missing in putting together the perfect Queensland team is Mal Meninga,” laughed O’Rourke.

The East Coast Nationals will hit Sydney Dragway across November 7 and 8.