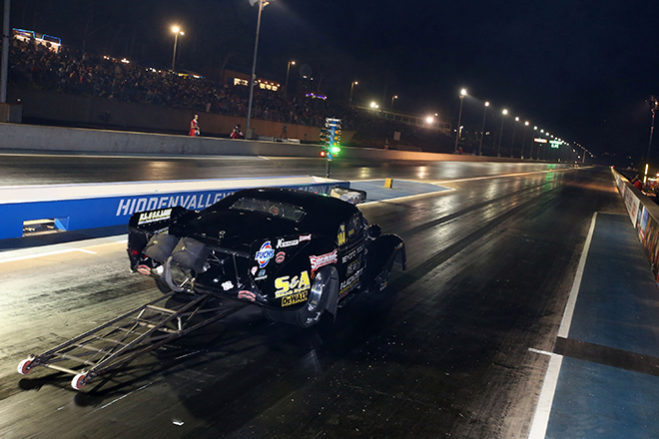 The Hidden Valley Drag Strip will be covered with rubber again this week with Round 2 of the national ANDRA Drag Racing Series with Top Doorslammer featuring as part of the NT Titles.…

The Hidden Valley Drag Strip will be covered with rubber again this week with Round 2 of the national ANDRA Drag Racing Series with Top Doorslammer featuring as part of the NT Titles.

Part of Territory Drag Racing’s 30th anniversary, it’s the first time the NT Titles will feature the national round 2.

“This is hot action and I’m sure locals and visitors alike will see some fine racing over the two days – Friday and Saturday,” Chief Minister Adam Giles said.

“It’s adrenalin, heart pumping action and worth going along whether you’re a fan or not.

“It follows on from the screamingly successful Round 1 event at Hidden Valley in July where drag racing fans were treated to their first ever look at Top Fuel racing featuring the world’s fastest accelerating vehicles.”

Sport and Recreation Minister Gary Higgins said the NT Titles will also see some of the NT’s best racers in action.

“The Territory Government will be funding a gravel trap for the drag racing with a grant of $50,000. This is an important safety feature.”

“We appreciate the fantastic support of the Government for motor sport across the Territory,” he said.

Hidden Valley Drag Racing Association President Scott Maclean said the gravel trap would be a fantastic addition to the facility.

“This will be a major safety asset for the track,” he said. “Primarily it is all about no one having a serious accident and gives the cars the ability to stop more safely. As a not for profit association, we’re very pleased that the Government is helping us out with this, it’s awesome and we’re very grateful.”

Mr Maclean said apart from Zappia and Canulli, spectators should also keep an eye out for Darwin’s own Matt Abel.

“Matt is our local hope – he’s a Darwin boy, he has the ability to do very well and the locals will all get behind him and it would be fantastic to see him win.”