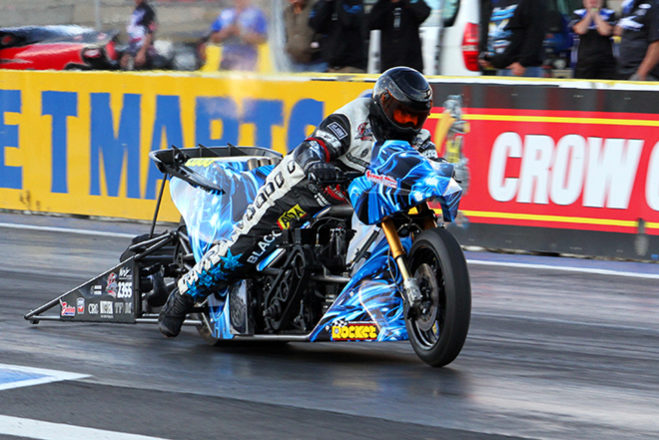 The two-wheeled warriors of Top Fuel Motorcycle will visit Adelaide International Raceway for the first time since February 2013 on April 9-10 for the ANDRA Championship Grand Final.…

The two-wheeled warriors of Top Fuel Motorcycle will visit Adelaide International Raceway for the first time since February 2013 on April 9-10 for the ANDRA Championship Grand Final.

The 2015/2016-season decider will see a title fight between the two men who faced each other in that same 2013 final, Chris Matheson and Chris Porter.

The two friends who often pit together, are separated by just 17 points with Porter leading the way after finishing runner up in the previous two rounds in Sydney and Melbourne. Current two-time National Champion Mark Drew is a further 39 points behind in third.

Matheson won the Australian Nationals against Porter in January and is the form man back on his devastating Nitro Voodoo machine that carried him to three National Championships between 2010-2012.

“We parked the Voodoo machine after the Darwin Round over twelve months ago,” says Matheson.

“Unfortunately, I had a spark plug blow out of the head in the early part of the run, which struck me in the chest, hitting me with 45,000 volts.

“The shock came out through the handlebars, which made me release my grip; I was lucky to survive the shock, let alone not being blown off the bike. It really gives a new meaning to ‘hands free’, not what you want at 200 mph.

“After a night in the Darwin Intensive Care Unit and a 40-hour drive home, Crewman Graeme Turner and I decided to re-design our engines and build complete new Billet motors. We need to continue to improve and not rest on our laurels if we are to continue to go quicker.

“That in itself is a task and took nearly 12 months to complete. We not only built engines, but we went over the whole bike, improving many other facets. Sometimes you need to take a few steps back before you can leap forward.

“We brought the Voodoo machine back to racing at the beginning of this Season and it’s been a sharp learning curve, as we have no data on the improved engines.

“The extra horsepower is taking us a little time to manage, however, will pay dividends once we tame it. We have softened it up to get down the track and already it’s clocking lazy 6.3 second passes at over 220mph, which will improve as we start to bring in a little more clutch.”

Adelaide is a happy hunting ground for Matheson where he remains undefeated. He is expecting a big crowd and intends to put on a show as the Championship could be decided in the final run of the weekend.

“Adelaide International Raceway is a great track and the atmosphere is palpable,” Matheson continues.

“The fans always come to support the racers and the on track racing is always at seats edge.

“I recall one meeting where it was extremely hot and the track temp was right up there. On one pass the bike smoked the rear tyre the entire length of the track, fish tailing all the way, it was so much fun, it reminded me of my dirt bike days.

“I expect the track temps to be the opposite in April, with temps to be probably in the low to mid 20’s. The track conditions with good cool air will produce quick times, risk is, throwing too much power and smoking the tyre, it will be a balancing act.

“The fans are in for an exciting event, you have three National Champions all vying for the win. And well over a thousand horsepower at the rear tyre, wheel standing the length of the track, in excess of 200mph (340kph) huge burn-outs, it will be a great show, one not to be missed.”