Newby Goes Back To The Future In Adelaide Win

Newby Goes Back To The Future In Adelaide Win 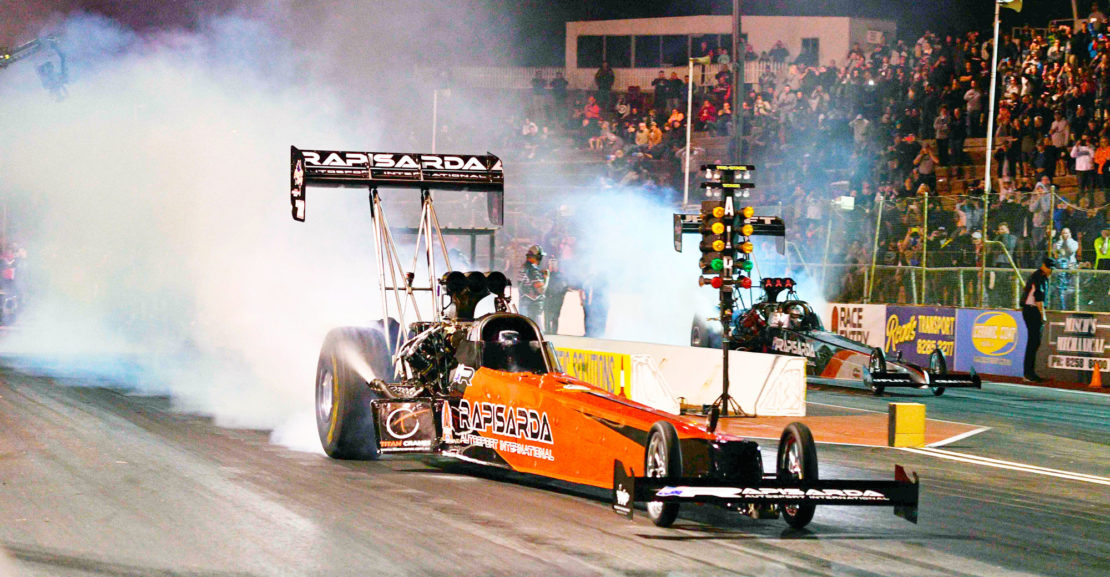 Wayne Newby scored a straight sets win over his Rapisarda Autosport International team-mate Damien Harris in the final round of the ANDRA season at Adelaide International Raceway.…

Wayne Newby scored a straight sets win over his Rapisarda Autosport International team-mate Damien Harris in the final round of the ANDRA season at Adelaide International Raceway.

Harris and Newby’s regular mounts were left behind at the RAI Sydney workshop. Instead, the team showcased the two quickest Fuel cars in Australian drag racing history. Wayne Newby piloted the 4.50 sec car that NHRA star Larry Dixon set the current record at Willowbank Raceway and Harris raced the car that American Scott Kalitta posted a 4.51 sec at Sydney Dragway.

Newby claimed honours in race one with a 4.25 sec pass to edge out Harris who stopped the timers with a 4.30. A timing glitch saw Newby credited with a half-track speed of 565 mph. Harris’ slightly adrift with a speed of 470 mph.

“I knew it was a good run but didn’t think it was that fast,” joked Harris.

On day two Newby ran a silky 4.20 sec to take the win while Harris dropped the number six cylinder and started turning the tyres at the top end for a 4.32.

In the final race, Newby lead off the line with a better reaction time of .069/.107 and hung on to take the win with a time of 4.23 ahead of the fast finishing Harris who clocked 4.29.

“We came to put on a show and I think the crowd went home happy. Three side-by-side passes with all the candles lit was a great effort. We last raced at Adelaide in April 2016 and came into this meeting with little data. For both my boys, Santino and Santo Jr., to get their cars to run down the track was a great performance.”

“The car we raced this weekend is a heavy wall car. The chassis is .068 inch thick compared to my usual car which is .490 inch. The difference means the car is less flexible, won’t arch as much or put the power to the ground as well.  For my tuner, Santino Rapisarda, that was the challenge for the weekend.”

“It was a great effort by all the crew. They did an excellent job. I can’t thank them enough. We couldn’t have done it without their contribution over the weekend. The car was faultless in all three rounds. Cant’ wait for our next event, the Santo’s Super Thunder meeting at Willowbank over Easter.”

“Any time you can pull a car out of the shed after four years and make it run like that you’ve got to be happy. We could have run faster but this weekend was all about putting on a show and judging by the crowd reaction we delivered.”

“The main difference between this and my usual car is that the cockpit is slightly larger and a bit longer. Everything is slightly further away. It’s all familiar but you are looking in different places.”