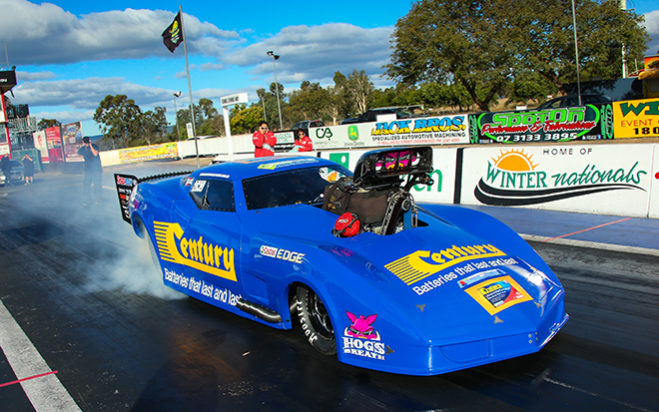 After making his comeback to competitive drag racing at last month’s season-ending Winternationals at Willowbank Raceway, Ben Bray will debut a brand-new 1979 Corvette Stingray at Hidden Valley Drag Strip this weekend for the opening round of the 2015/2016 ANDRA Drag Racing Series.…

After making his comeback to competitive drag racing at last month’s season-ending Winternationals at Willowbank Raceway, Ben Bray will debut a brand-new 1979 Corvette Stingray at Hidden Valley Drag Strip this weekend for the opening round of the 2015/2016 ANDRA Drag Racing Series.

The Stingray will be supported by naming rights sponsor Century Batteries, with Century Batteries National Sales Manager Andrew Bottoms saying he was pleased to throw his support behind the 31 year old and the Team Bray Racing outfit in a move which extends a 15 year associate partnership relationship with TBR.

“The heart and the passion shown by Team Bray Racing over their long and accomplished history is exceptionally impressive and we are very pleased to be able to partner with them as they head into the next exciting phase of their racing career,” said Andrew.

“The new Stingray of Ben Bray cuts a striking figure, and we are very excited for it to carry the Century Batteries name under our new deal.”

Joining Ben at the track but not in the driver’s seat will be drag racing legend and Ben’s father Victor Bray, who has paused his on-track activity temporarily to support his son’s comeback to the sport after his back injury in June of 2014.

“We are so excited to debut the brand-new Murray Anderson-built Century Batteries 1979 Corvette Stingray this weekend,” said Ben Bray.

“Absolutely everything about this car is brand new for a total spend of around $300,000 after a two-year build process, so we can’t wait to see her in action for the season opener.

“To have Century Batteries on board is a great boost for us and our team, and are very much looking forward to representing them to the best of our ability.”

The Brays were at Willowbank Raceway earlier this week for testing of the new machine, and will depart for Darwin on Tuesday.

“The shakedown at Willowbank went well, we are still developing the automatic transmission but we tried a few things at the Winternationals which netted a good result and we are feeling quietly confident that we are heading in the right direction,” said Ben Bray.

“I am feeling very comfortable in the new car, my back is as good as gold and I have a new seat that has been designed around my body shape.

“Originally I was going to race dad’s car in Darwin but things have really come together thanks to the help of some really great people – it is really amazing to be starting the new season in a new car and with the new naming right support of Century.

“I have to say a big thank you to Jamie Page from ET Chassis and Racecars for all his help with fabrication and for putting in endless hours at the workshop, as has Brett Farnell, and dad and my mum Maree – their support has been invaluable.

“My wife Sam and my kids also are deserving of a lot of thanks, they have been a fantastic support and very understanding of the long hours at the workshop.”

Ben Bray and Sam Bray were married earlier this year, just weeks ahead of his competitive come-back.

“While it was nice to have Ben at home all the time over the last year, I am really happy to see that he has recovered fully. I fell in love with Ben Bray the drag racer all those years ago, so I am happy that he is back doing what he does best,” said Sam.

Qualifying at Hidden Valley Drag Strip kicks off at 6.00pm on Friday 17 July ahead of racing eliminations from 5.00pm on Saturday 18 July. For event information, please visit hiddenvalleydrags.com