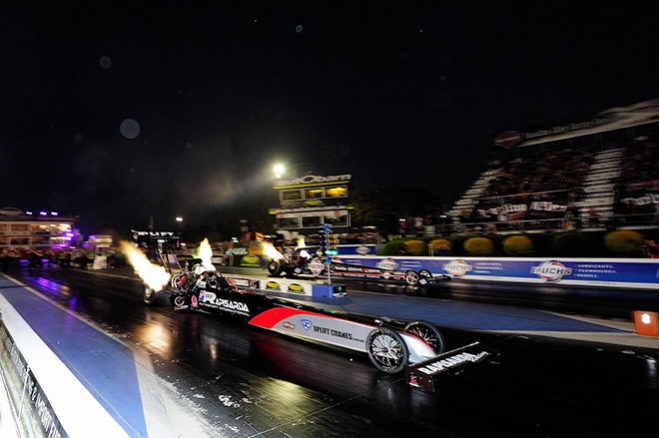 With the release of the ANDRA Championship Drag Racing calendar for the next 18 months, Willowbank Raceway has confirmed a new format for its popular Santo’s Super 3 Extreme Drag Race Event presented by Uplift Cranes and Titan Cranes, which is held annually at Easter.…

With the release of the ANDRA Championship Drag Racing calendar for the next 18 months, Willowbank Raceway has confirmed a new format for its popular Santo’s Super 3 Extreme Drag Race Event presented by Uplift Cranes and Titan Cranes, which is held annually at Easter.

In 2015 the event will enjoy its third year again supported by sponsor Santo Rapisarda, in memory of his son Louie Rapisarda.

After two years running as a two-day format, from next year the event will further the ‘short, sharp, intense’ motto which has always driven it by becoming an action-packed one-day event. To be held on Easter Saturday, the event will once again be headlined by the nitro-burning 10,000 horsepower Top Fuel dragsters and the highly-competitive Top Alcohol class, while being supported by a range of other racing brackets and entertainment.

“The concept of this event has always been about a short, sharp and intense experience; taking drag racing into a compressed format which provides awesome racing and high levels of entertainment,” said Manson.

“The three round format introduced at this event in 2013 provides spectators the opportunity to see more cars racing each other more often than the traditional elimination format that has been part of the sport since its inception, while also bringing some more theatrical elements to the high quality drag racing show such as effects lighting, high quality audio and audience interaction activities.

“Now in its third year, Willowbank Raceway has chosen to ramp the focus and intensity of this event up even further by running it on Easter Saturday only.

“Moving to the one day format also allows both the existing fans of this event and those who may be experiencing it for the first time to easily build the event into their busy Easter schedule as a true highlight experience.

“One day drag racing events have been hugely popular before now and with so many people being time poor these days, this one-day racing format which retains the three-rounds of racing approach will provide a concentrated explosion of high quality action sport, a great crowd atmosphere and an opportunity for spectators to see every bit of action at the event without having to commit over several days.”

Ticket prices for the 2015 Santo’s Super 3 Extreme Drag Race event will be frozen at the same ‘per day’ prices that were offered in 2014 – $35.00 for adults and $30.00 for Students with ID and Concession Card holders – and free for children aged 13 and under. Further information regarding the event will be released on www.willowbankraceway.com.au closer to the event.