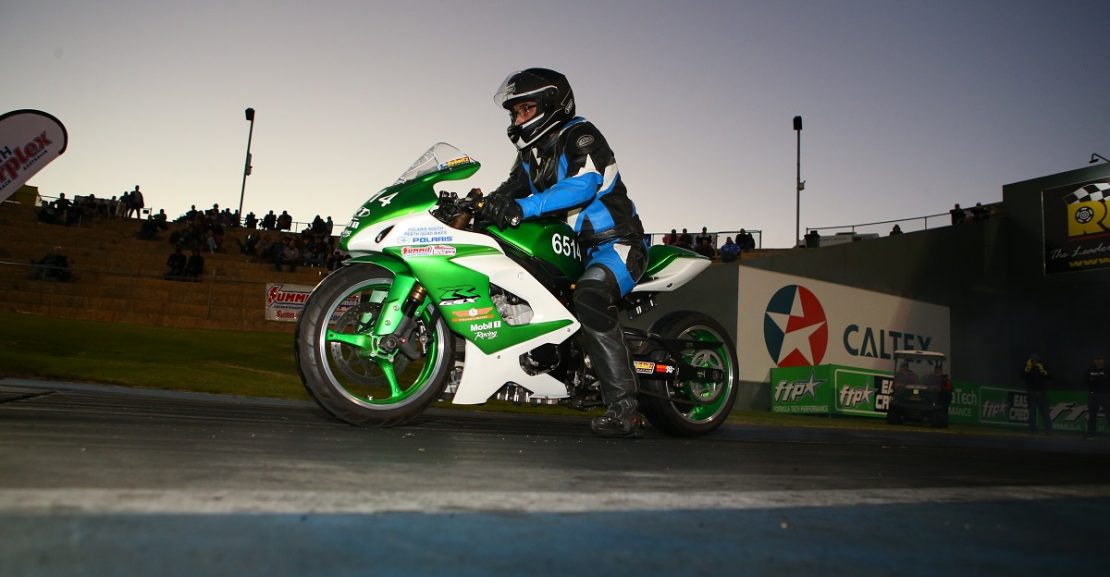 The last time we saw Chris Moore in the Summit Racing Equipment Sportsman Series, he was taking out the Modified Bike event victory at the ANDRA Grand Final in April of this year.

Now after some time away from the race track and an incredible 20kg weight loss, the Kelmscott (WA) resident is excited to get back into action at this weekend’s Goldenstates (9 November) – round four of the 2019/2020 Summit Racing Equipment Sportsman Series.

“The ANDRA Grand Final was quite a good event – in qualifying we ran some pretty consistent times and then it was onto eliminations where somehow I managed to get all the way to the final,” Moore explained.

“While I took the win in the final I was a bit disappointed as the guy I was racing against, ‘Budgie’ Jones, stalled his bike after his burnout and was unable to get it restarted – we had raced each other in the finals a few times before at local championship events and after winding ourselves up it was disappointing to not be able to fight it out for the win.

“Since the Grand Final I haven’t really touched the bike as it had been running perfectly, so I parked it up and left it as it was. What has changed is I have lost 20 kilos since then so now the bike does need a few tweaks to it as it is playing a bit more aggressive than I would like at the moment thanks to carrying less weight.

“I am feeling pretty good heading to the Goldenstates, the bike is running very consistently although this will be the first official race event for it since the Grand Final, and it should be a very interesting field as well with some riders moving on to Competition Bike and an influx of new riders coming in.”

For Moore, the Goldenstates is a highlight on his racing calendar.

“It is a pretty special event and it is great to have all of the interstate racers come over for it so we can show off our track amidst a really great atmosphere,” Moore said.

“I have been going to the Perth Motorplex for many years, even before I started racing. I actually worked there and then went on to crew for my old man, before getting into racing myself.

“Especially since Ray Treasure has come on board, it is really great – it is absolutely beautiful and us group three racers are really looked after both pit wise and on the track.

“I would like to thank Ray and all of the track staff for all that they do. I also want to say thank you to my sponsors, Pace Motorsport, Straightline2ten, Statewide Oils, Polaris South and Badger Racing, for their support of my racing, as well as my dad Phill Paton, Vickie, Tom, Kelly and my partner Sally.”

Round four of the 19/20 Summit Racing Equipment Sportsman Series, the Goldenstates, will be held at the Perth Motorplex on November 9. For more information, please visit www.andra.com.au or www.motorplex.com.au