Misspent youth to culminate in dream debut for Racco

Misspent youth to culminate in dream debut for Racco 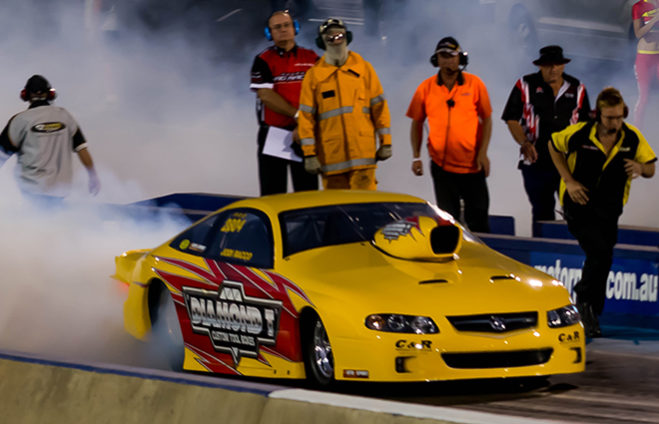 When West Australia’s Jodi Racco makes his Fuchs Winternationals debut at Willowbank Raceway in less than three weeks (June 4-7) it will be just his second ever professional Pro Stock event and a dream come true following what the 46 year old calls a ‘misspent youth’.…

When West Australia’s Jodi Racco makes his Fuchs Winternationals debut at Willowbank Raceway in less than three weeks (June 4-7) it will be just his second ever professional Pro Stock event and a dream come true following what the 46 year old calls a ‘misspent youth’.

The Queen’s Birthday long weekend event is the largest championship drag racing event held outside of North America, and will host more than 500 racers and an expected 30,000 spectators at Queensland’s premier drag racing facility across its four days.

“My introduction to drag racing came from what you could call a misspent youth with my older brother Dion, growing up ten minutes away from Ravenswood Raceway it was bound to happen that I would find myself on the race track,” laughed Racco, a Maintenance Superintendent from Waroona who previously raced in Super Stock, making five WA Super Stock finals in a row in his 308 BMSA Commodore, taking 3rd in the 07/08 and 2nd in the 08/09 seasons.

“Mum and Dad to this day think I am crazy, but after starting out crewing at the age of 14 I couldn’t walk away.

“Now to be travelling across the country to compete in only my second ‘pro’ event and at the biggest show in Australian drag racing, it is as good as it gets and is the realisation of a dream I have had since I started out as that 14 year old teenager.

“The Winternationals is hands down the best event I have ever been to, and I can’t wait to be a part of it!”

Racco has turned the wheels in anger in the Pro Stock class once before, making his debut in the category in 2013 at his home track of the Perth Motorplex and its Westernationals event.

“Pro Stock has got to be one of the hardest classes out there to run in my opinion and I take my hat off to anyone who runs these cars and is able to go rounds,” said Racco, who will field a 2010 Don Ness Holden Monaro Diamond T Toolbox racer previously owned by Wayne Daley.

“I have been lucky enough to have Michael Marriott guide me through the ‘Pro Stock maze’, spend some time with Wayne Daley who has shown me the ropes, and also champion racer Lee Bektash who was very entertaining the whole time – they are great guys.

“All going well we are hopeful of making the field and improving on our personal best (7.03 seconds) that we ran in Perth with an engine that was built and dynoed by our team here in West Australia.”

While his parents may question his fascination with the sport, Racco’s wife and children are enthusiastic supporters of his passion.

“My wife Karen is my unofficial sponsor and the kids Maddi and Molly are my official supporters, and it is definitely a point of pride for me that I am still happily married with two daughters even after 30 years of drag racing,” said Racco, who also thanks his sponsors Diamond T Toolboxes, Motorsport Database, Applied Automotive, and his C&R Motorsports Developments business partner Geoff Chaisty, while sending a ‘big thanks’ to Shane DeRosa at SDR Engineering (WA), Rino Conte at RC Engines and his crew Kev, Stevie, Karl, Muzza and Phil and their partners for all of their support.

“I have always believed that a competitive Pro Stock package could be put together in WA. We have some awesome drag racing talent over here and I am really pleased to be able to compete on the national stage and see their hard work rewarded.”

Racco and the Pro Stock field will be joined by more than 500 racers at the Fuchs Winternationals, including competitors from their fellow professional categories Top Fuel, Top Alcohol, Top Doorslammer, Top Fuel Motorcycle and Pro Stock Motorcycle.

For more event information, please see below or visit www.willowbankraceway.com.au