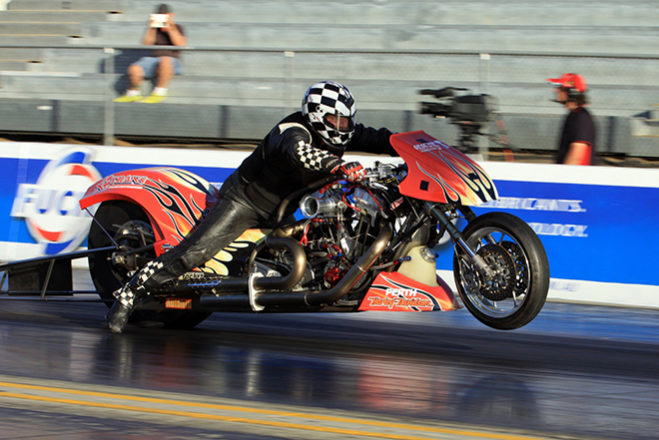 When Mark Drew destroyed the track record at Hidden Valley Drag Strip on his way to the event win in July, he didn’t realise he’d wrapped up the 2014 ANDRA Drag Racing Series Top Fuel Motorcycle Championship.…

When Mark Drew destroyed the track record at Hidden Valley Drag Strip on his way to the event win in July, he didn’t realise he’d wrapped up the 2014 ANDRA Drag Racing Series Top Fuel Motorcycle Championship.

At that stage the upgrades to Calder Park, the venue for the 2014 Grand Final, were not yet announced meaning there were two events still to be contested.

For the good of the sport, the Grand Final was moved to the Australian Nationals in Sydney allowing Calder to receive the necessary cosmetic surgery to ensure it’s place as a premium Drag Racing venue moving forward.

As a result, with only the Australian Nationals to come, Mark Drew had already attained an unassailable lead to claim his maiden Australian Championship on his first full season chasing the ANDRA Drag Racing Series points.

“This was our first year racing the championship rounds to contend for the Australian Championship,” said Drew.

“I’m very pleased to have won and I’m looking forward to running the number one plate next season even though it is only for six months.

“We will be defending our title next year and running the championship rounds again.”

Drew first began racing his Nitro Harley back in 2006 but raced a limited schedule due to family and financial commitments preferring to test in Perth until he was confident of running fast enough and consistent enough to have a good chance at winning.

“I don’t think there is a lot of people who know how expensive and time consuming it is to run a Nitro Bike except for the fellas racing them. Without the support of sponsors and friends it’d be impossible.

“I’d like to thank Oliver from Perth Harley Davidson also Andrew and Tony for their help at and away from the track and Keith from K Trans Australia, Charlie from Westside International, John from Wanneroo Blinds, Stan from Stan’s Tyre Service and Anthony from A&J Drilling.”

With the cost of racing in mind, Drew has already shifted his focus to next season having decided not to travel to Sydney for the season finale with the Championship sewn up.

But come next season he feels his former Doug Horne owned dual NHRA and ANDRA Championship winning Harley can be even quicker in his quest for back to back titles.

“I don’t think running in the 6.2 seconds will be out of the question next season and I’m hoping in the next couple of years to be able to get to 6.1 seconds.”

Although the new champ won’t be in action, the Australian Nationals will see the return of 2013 Champion Chris Porter following a complete rebuild when his bike exploded at the Fuchs Winternationals.

Also on the bill will be three-time champ Chris Matheson who returns following an electric shock received during Round 1 of eliminations at Hidden Valley ensuring a nitro shootout at Sydney Dragway October 31 – November 2.

For more information about the Australian Nationals including ticketing information, please click here.