Matheson ready to light up Darwin

Matheson ready to light up Darwin 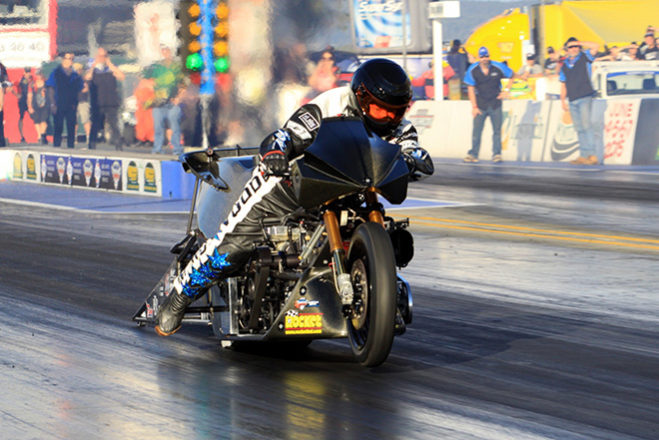 Fresh off his latest Winternationals crown, three-time Australian Champion Chris Matheson is among those making the trek and he can’t wait to set the Top End alight in what promises to be a duel between 2014 Championship leader Mark Drew and “Matho” himself.

Matheson was a visitor and crewmember for current Champion Chris Porter at Hidden Valley last year while still recovering from a high-speed accident at Sydney Dragway in May 2013. Having seen what the Hidden Valley Drag Strip is like from the sidelines, he is itching to experience it at well over 200 miles per hour.

“The track is excellent and the crowd is very enthusiastic,” said Matheson.

“The fans will see the fastest nitro Harley and multi-cylinder motorcycles in Australia.  Mark Drew on his new bike, reset the Australian Twin record to 6.37 seconds and Nitro Voodoo (Matheson’s team) are the current national record holder running 6.04 seconds at over 241 mph (387 kph).”

Matheson says he and Drew will be attempting to re-write the current track record of 6.371 seconds and 205.47mph, set by Athol Williams at around the time of year n 2009.

But while he is hoping to put on a show, he still has one eye on the ANDRA Drag Racing Series title ensuring the fans are in for some epic battles.

“The win at the Winternationals is a step in the right direction, however, to win the Championship from here will be a monumental challenge, one of which we will chase to the very end,” he said.

“Drew has demonstrated recently that he is the man to beat, running consistent 6.3 second passes at well over 220 miles per hour. We are confident the track conditions will be first class. Hopefully the air is dry, which will enable us both to make good, clean horsepower.”

The stars of Top Fuel Motorcycle, Top Alcohol and for the first time in the ANDRA Drag Racing Series, Top Doorslammer, will hit the Hidden Valley Drag Strip from 6pm on Friday July 11 and Saturday July 12. Gates open at 3pm Friday and 1pm Saturday.