Marty Dack: “I have been taking archery lessons”

Marty Dack: “I have been taking archery lessons” 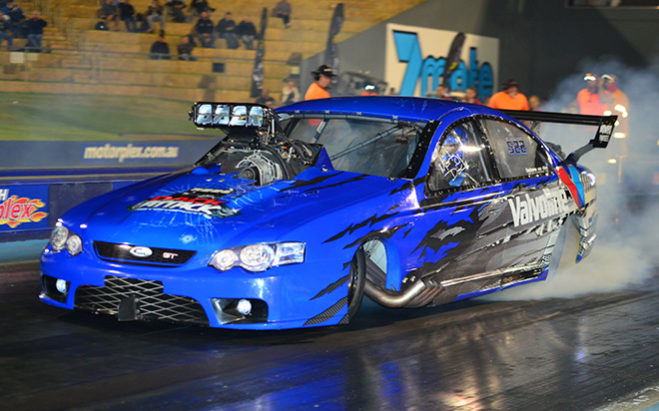 The Holden versus Ford battle may be on it’s way out in V8 Supercars but it is alive and well in ANDRA Drag Racing as Marty Dack flies the blue oval flag in the face of Holden stalwarts John Zappia and Maurice Fabietti.…

The Holden versus Ford battle may be on it’s way out in V8 Supercars but it is alive and well in ANDRA Drag Racing as Marty Dack flies the blue oval flag in the face of Holden stalwarts John Zappia and Maurice Fabietti.

At a time when Ford backs away from motorsport as a company it is left to dedicated racers like Dack to take up the mantle and keep the fight alive.

“I have been a Ford man for my entire life,” said Dack. “To drive a Ford in an eliminator where they are quite rare is an honour. We will do our best to run the blue oval high and proud and hopefully you will see the Valvoline Ford Falcon in the winners circle on Saturday night.”

An ANDRA Drag Racing Series win on Saturday in the 44th Westernationals at Perth Motorplex would be just reward for Dack’s team after finishing fourth in the Australian Top Doorslammer championship last year and reaching the semi finals two weeks ago in the opening round of 2015.

“Our qualifying show at the Nitro Slam was, in our eyes, one of our best qualifying days to date. We showed that not only do you need to run fast but also it’s consistency that is key.

“Everyone is working so hard to maintain a consistent 5.8 second car, and that is just around the corner for us, a few minor adjustments to key areas and we will be there in no time. Our car is doing exactly what it needs to do to run fast, its just everything needs to fall in place and we will be able to hit it out with the big dogs.

“When we enter every event we have our eyes on the prize, the ANDRA Gold Christmas tree; but as a West Australian native the Westernationals is the biggest and I would like to plant my name in history with a win at the 44th Westernationals.”

Although Dack finished fourth in the standings last season it came at cost as mechanical problems plagued their campaign. But he is confident the team is on top of those issues and close to ironing all the kinks out as they sit on the cusp of a win.

“Last season we believe we showed the start of our true potential, we have regrouped over the break and as seen at the Nitro Slam with a strong showing we are confident that 2015 is our year.

“Firstly we would like to break through and get the monkey off the back by winning a race week, everyone in our team feels that we are up to the task and we will work diligently together to make it happen.

“John Zappia, he has a massive target on his back and lets put it like this, I have been taking archery lessons.”

It will take a straight arrow to shoot Zappia down but weather will also play a large part with another scorcher forecast for Perth this weekend. Dack says the chess game of how the teams read the conditions and the track will determine who ultimately takes home the gold.

“The weather is what makes our racing so good to watch, everyone has an equal opportunity to do well, and do not so well when they fire their cars up,” explained Dack.

“It is up to the crew and myself to read the track, understand what the data is telling us and from there it will be a matter of who can make it stick.

“The 6pm session is a tricky one, and our car loved the track at 6pm at the Nitro Slam, but everyone’s favourite session is the low temperature 8pm session, that’s when the cars make the best power and the track is in tip top condition, so look out for that one.”