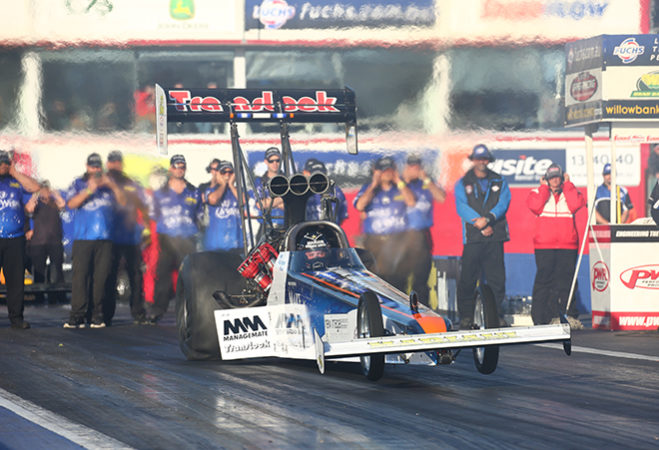 In conjunction with show organisers, team owner and driver Mark Mariani will be conducting fire-ups of the team’s 8,000 horsepower Top Fuel Dragster four times over the course of the weekend.

An extremely excited Mariani said: “ We love bringing Top Fuel to the masses, especially to people who may not have ever heard a Top Fuel Dragster start up before”.

“It is an assault on the senses, you don’t just hear these cars – you feel them thumping in your chest!”

Fans will also get the added bonus of seeing the team up close and personal while they work on the car up in between the planned twice daily fire up sessions.

Mark Mariani will also be on hand to meet fans and sign autographs throughout the course of the weekend at the stand alongside ANDRA.

In addition to the fire ups, the team will be unveiling it’s highly anticipated new look for the 2015-16 Drag Racing season.

Partnering with Make-A-Wish Australia once again, Mariani Motorsport will help to raise the profile and also to help raise much needed funds for the organisation which has granted over 8,000 wishes to children with life threatening illnesses since it’s foundation in 1985.

“The new scheme that we will be revealing at Motor Ex will be a little bit of a departure from our previous look”, enthused Mark Mariani.

“All I can say at this stage is that there will be blue, and lots of it!”

He continued “We have had such a great relationship with Make-A-Wish since we launched our program in 2013, we really wanted to build on that and help improve the public’s awareness of the great work that they do”.

The 2015-16 season promises to be a bumper year for Mariani Motorsport, with the team re-branding their operation in the off season complete with a new look logo and team website.

“We are absolutely stoked with the new website that Josiph and the team from Blueprint Institute have come up with”, said Mark.

Fans can visit the new site at www.marianimotorsports.com.au.

The team will be also be showing some sneaky previews of the new livery on social media over the course of the next week, so for fans to stay up to date with all the latest news they can follow the team on Facebook – Mariani Motorsports, Instagram – @Mariani_Motorsports and Twitter – @Mariani_TF_Aust.