Mariani Motorsports partnering up for success

Mariani Motorsports partnering up for success 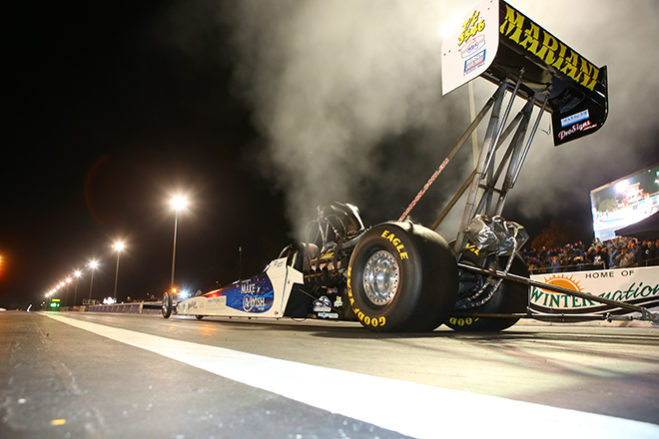 Top Fuel driver and team owner Mark Mariani is looking forward to the future of Drag Racing in Australia, and the second generation racer is doing everything within his reach to ensure the future success of his fledgling Top Fuel team.…

Top Fuel driver and team owner Mark Mariani is looking forward to the future of Drag Racing in Australia, and the second generation racer is doing everything within his reach to ensure the future success of his fledgling Top Fuel team.

During the current off season, Mariani has re-branded the family owned nitro fueled operation as Mariani Motorsports in anticipation of a bumper season of racing for the 2015-16 Drag Racing calendar.

Make-A-Wish Australia is teaming up with Mariani Motorsports once again, after a program launched in September 2014 proved to be an instant success in terms of awareness for the charity and fan participation.

In addition, the team has partnered up with two well respected media organisations to improve the team’s reach in terms of corporate involvement, and also social media interaction with the legion of fans that the team has amassed since announcing their entry into the Top Fuel Class, 2 seasons ago.

“We have partnered with Blueprint Institute, a fantastic local marketing company to get out there and really give us great representation in the corporate marketplace”, Mariani said today in a statement.

“We have known Josiph and his team for over 10 years and have been increasingly impressed with the operation that they run.”

“It is no secret that Motorsport is an expensive game, and Top Fuel Drag Racing is no different – corporate partners are the key to a successful race team and we firmly believe that Blueprint Institute can help us in that respect.”

Mark continued “Our relationship with Make-A-Wish Australia has been fantastic and we are looking to use Blueprint Institute to build our program off the back of the footings we have laid with them in the public eye over the last 9 months.”

Mariani Motorsports is also strengthening their presence in the online space by appointing Rusty Media Solutions as Social Media and Public Relations Manager.

Rusty Media Solutions Managing Director Rusty Gregory is a familiar face and voice to thousands of motor sport fans across the country through his work as commentator on the ANDRA Drag Racing TV Show on SBS and Fox Sports.

Mariani Motorsport team owner Mark Mariani enthused; “To have someone of Rusty’s stature and presence in the media industry was going to be nothing short of a positive for our team, and I’m looking forward to the increased interaction we will be having with Drag Racing fans from all over the world.”

Future plans for Mariani Motorsport will be revealed over the coming weeks and months, culminating in an unveiling of the new livery for the dragster on display with ANDRA at Sydney’s MotorEx on 25th and 26th July, at Sydney Olympic Park.

The brand new Mariani Motorsports website will be online this week. Check out www.marianimotorsports.com.au for all information regarding the team and upcoming events.