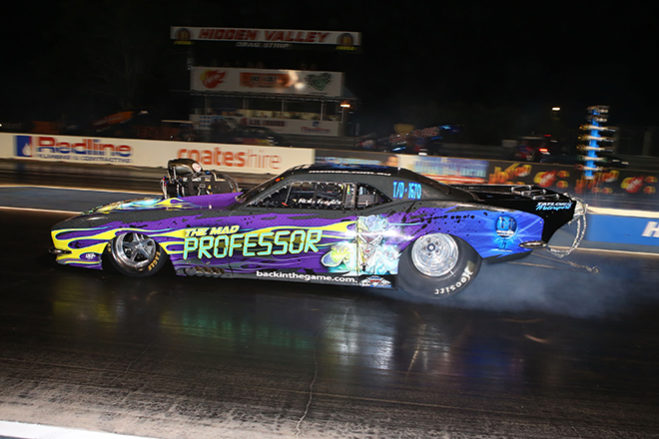 The Mad Professor of Top Doorslammer, Rob Taylor, fell in love with the people of Darwin, the city and Hidden Valley Drag Strip three weeks ago.…

The Mad Professor of Top Doorslammer, Rob Taylor, fell in love with the people of Darwin, the city and Hidden Valley Drag Strip three weeks ago.

Taylor, from Moonee Ponds in Vcitoria, enjoyed himself so much he can’t wait to return to the Top End for Round 2 of the ANDRA Drag Racing Series as part of the NT Titles over the weekend of August 14-15.

Nitro Up North is considered one of the greatest Drag Racing shows ever seen in Darwin and although Taylor was forced to settle for the non-qualifier shootout on that occasion, he is looking forward to fronting once again even just to have another crack at what is considered a first class race track.

“What can I say about Hidden Valley? Wow, 120,000 people live in Darwin that put on one hell of a community effort,” he said.

“The Government back the sport and the NT businesses also back our sport which in turn is fantastic for the promoters and everybody involved and because of this the fans turn up, as it is so professionally organised.

“The other tracks and Governments around Australia could learn a great deal from NT.”

The NT Titles will be just the third event for Taylor in Top Doorslammer and he acknowledges there is more to learn as his team continues the transformation to professional Group One operation.

“The transition has been very smooth due to the crew and people I have around me,” he explains.

“Some of the other teams have been genuinely welcoming so we have not had a bad time at all. Creating a brand such as the Mad Professor and trying to find a sponsor has been the most challenging part so far.

“Last meeting presented some challenges that we had to overcome including a problem during a burnout I lost power and I was unable to complete the burnout, hence striking the tyres.

“We had an issue staging the car as the clutch was being temperamental.

I have only completed ten full passes with the new configuration, so I’m still learning.

“I have had time to go over in car footage and learnt what I need to improve on, I will be on my A-game for Round 2.”