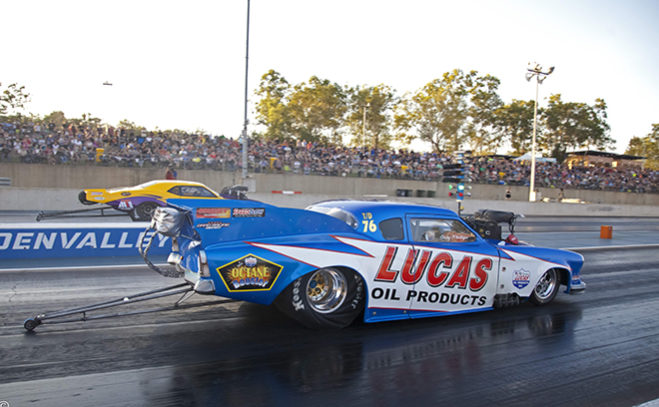 In front of a track record crowd, Gary laid down an off-the-trailer 5.903 at 247.16mph, to record the quickest pass of the session, in the first event of the new season.

“It shook really hard on that run, but was still going straight, so I hung with it. It was a great way to start the weekend”, said Gary.

After an aborted second qualifying attempt, Gary’s earlier 5.90 would see him end up qualifying in the #3 spot in the over-subscribed field which gave him lane choice in the first round .

In the opening round of eliminations, Gary would record his personal best ET and the win light in his Lucas Oils Studebaker with a 5.837 at 249.30mph, over Sam Fenech.

“We’ve been trying a lot of different approaches with the way we run the car over the last couple of events, and it’s been showing great potential. That run was nice, and we’re hoping this is the start of more things to come”.

In the semi-finals, Gary would use a 5.870 at 249.21mph to advance to the finals over Ben Bray, after experiencing severe tyre shake.

“The new wider tuning window didn’t slow the car down as much as it normally would have, and as a result the run was still quite good”.

In the finals, Gary had to use every bit of his 46 years of experience, to drive the car away from the wall. A small amount of transmission fluid from a loose reverser cover had leaked under the rear tyre, causing it to abruptly drive to the right. After a quick pedal, a 5.949 at 245.36mph turned on the much sought-after win light for the Lucas Oils team, over Mark Belleri.

“The Northern Territory government have done some fantastic upgrades to the facility, and the atmosphere up there is just great. We’ve performed pretty well in our trips up to the far north, and hope this trend continues for years to come”.

There is no rest for the Lucas Oils team, as the next event is 1,500km south of Darwin in Alice Springs in central Australia, for this weekend’s Desert Nationals.

“We’ve never been to Alice Springs before, so we’re excited to race somewhere different, especially since we’ve heard great things about this new track. Even though the two events are only a week apart, we are going to experience very different weather conditions. Darwin was very hot and humid, and Alice Springs is going to be very cold. It’s going to be an interesting event for sure”.

Gary would like to thank his sponsors, Lucas Oil Products, Speedflow, J Payne Race Engineering, and crew for the support in making this win happen.

For more information, and to keep up to date with the team’s results, check out their Facebook page at, www.facebook.com/GaryPhillipsRacing.