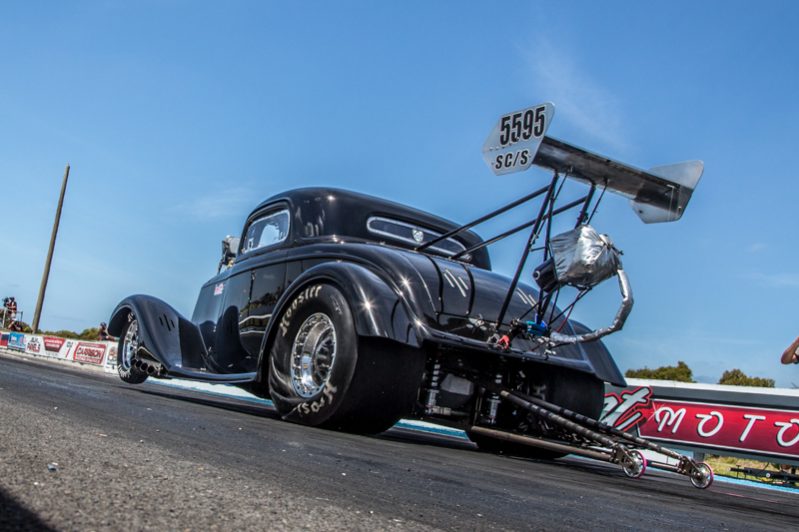 Jason Keily may be third in the Supercharged Outlaws Summit Racing Equipment Sportsman Series championship points and have a win and runner-up result under his belt so far this season, but the Melbourne racer is hoping for a change of luck at Mildura’s Twilight Nationals this weekend.

“We love Mildura, we love the facility and we love the people, it is absolutely great – however as far as our luck at Mildura goes, we seem to have no luck there whatsoever!” laughed Keily.

“We go there and we have a great time with great people every time, but the car always seems to have something wrong with it; I call it the Mildura curse!

“We keep going back there though and I keep saying that eventually my luck has to change! Hopefully we can see that happen this weekend,” he grinned.

While Mildura’s Sunset Strip Nationals saw Keily’s season get off to a rocky start, the 49 year old truck driver has gone on to secure victory at Portland’s South Coast Nationals in November before returning to the South Coast Raceway facility in January to go all the way to the finals.

“Our first round didn’t go to plan as we got through the first round of eliminations and then broke a rocker which put me out, but it definitely could have been worse,” Keily explained.

“Then we had the win at Portland which was great, especially because we had resolved the issue we had been having with the rockers which had been a problem for a few meetings.

“When we went back to Portland in January it was another really good event and we made the final, but then unfortunately the car wouldn’t start! We think the short turnaround time saw the car unable to cool down as much as it needed to and so we didn’t have the cranking amps we needed to start the car. We have put measures in place now so that won’t happen again.

Something else Keily will be looking for in Mildura this weekend is valuable championship points.

“At the start of this season we never intended to travel to chase all the rounds of the championship, we just don’t have the budget. We are pretty happy to be in third in the points though, and I guess it all depends on how we go in Mildura this weekend,” said Keily, while thanking crew members Paul and Jen as well as his fellow racers Tim and Sue Stewart, Graeme Cooper and Johnny Marshall of Marshall Cams for all of their support of his racing.

“If we do well and we end up on maximum points, I guess we will have to try and get over there to Perth for the final rounds. It is unlikely at this stage, but you never know and we will just have to see what happens this weekend and take it from there.”