Kapiris is ready to race the pack with new sponsor RacePak

Kapiris is ready to race the pack with new sponsor RacePak 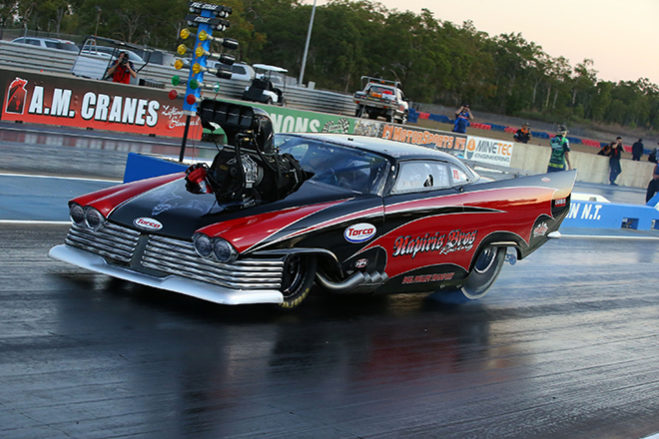 He might be one of the most laid-back characters in the Top Doorslammer field but don’t let Peter Kapiris’ smile fool you – he’s at the East Coast Nationals to win!…

He might be one of the most laid-back characters in the Top Doorslammer field but don’t let Peter Kapiris’ smile fool you – he’s at the East Coast Nationals to win!

The Victorian–based Doorslammer veteran has some new tricks up his sleeve for the weekend’s event, thanks to long-time tuner, Mark Brew.

“The car has some new technology on-board thanks to a sponsorship deal brokered by Mark (Brew). We have gone to a RacePak computer so we can make this thing really haul,” Kapiris explained.

“I only have one concern – that this computer might replace me as the driver!

“Mark looked after me on this and it’s a part of a new deal, with RacePak supporting the car. We plan on an even stronger performance in Sydney for this event.

The Kapiris machine has always been a beast and has been touted by many as the car and driver combination most likely to defeat reigning champion, John Zappia.

The car’s best elapsed time of 5.76 and a terminal speed of 249.8mph show that the team is amongst both the quickest and the fastest in the field.

Kapiris concluded, “We also have some new and old faces in the paddock this weekend. It’s fantastic to have Andrew Searle back, he was hard to beat then and I’m sure it will be even harder to beat him now.

“We also have Frank Mamone coming to race in Doorslammer. That guy will bring so much to our category – he’s character! He’ll be great for the fans and the racers – he will be the life of the party!”

“I love having fun but lets be honest – I’m here to win!”