Justin Russell Back in the Saddle Again

Justin Russell Back in the Saddle Again 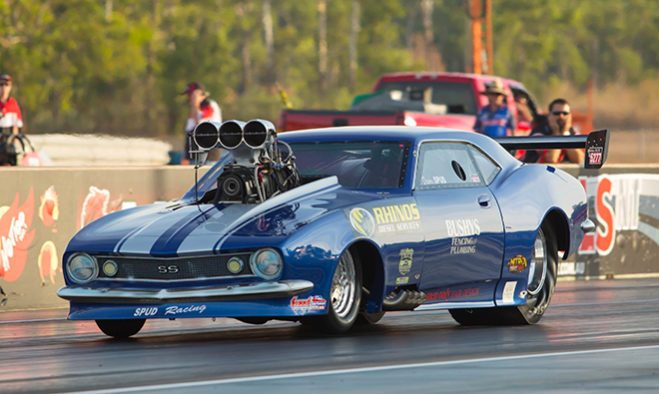 It’s late at night on 27 December 2015. Friends Justin Russell and Adam Murrihy line up opposite each other at Calder Park to race for an ANDRA Christmas Tree in the Supercharged Outlaws final for Round 6 of the Summit Racing Equipment Sportsman Series.…

It’s late at night on 27 December 2015. Friends Justin Russell and Adam Murrihy line up opposite each other at Calder Park to race for an ANDRA Christmas Tree in the Supercharged Outlaws final for Round 6 of the Summit Racing Equipment Sportsman Series.

Murrihy is slow off the line but the race is already won. Russell has red lighted by .006 seconds. Unfortunately didn’t see the red light.

Flooring his red Chevy Camaro to the finish line, the car comes unstuck, stepping out of the groove and flipping onto the roof, sliding wildly into the wall and eventually coming to a stop in the braking area.

As everyone held their breath, Russell thankfully emerged from the wreck okay, shaken, but walking away unhurt.

Most people in that situation would probably decide to take a break but not Justin Russell. He immediately began thinking about his comeback.

“I had made it to the ANDRA Drag Racing Final with good friend Adam Murrihy,” he says looking back.

“We were both concerned with how cold the conditions were becoming on the night. We mentioned this to ANDRA Officials, who said it was entirely up to us to make the decision to go out and race. Being the finals, Adam and I decided to race.

“I was concentrating on cutting a good light, so I went at the tree eager to get to the end before Adam. Unfortunately I didn’t see the red light off the start line as I had my hands full on the wheel.

“Just before the finish line the car stepped out and came around on me flipping on its roof into the wall then sliding all the way back to the breaking area. I towed the car home and started pulling it apart the very next day to see what damage had been done.

“Firstly I thought what was it going to cost me to get back to where we were – we had started being very competitive. Secondly my family were very supportive of me to make a return. They see how passionate I am towards racing and also not being hurt played a big part in making my comeback.”

Assessing the damage Russell contemplated rebuilding the Camaro as the damage was not as bad as the incident had looked – a testament to the original build and the safety standards.

The process of a rebuild however was going to be time consuming so the decision was made to move on and purchase a new car.

“We decided to purchase a roller as the running gear from the red Camaro was all okay. This would allow us to get back to racing for the start of the new season,” he explains.

“I noticed Lucky Belleri Racing advertising their Doorslammer as a roller and after looking at the car and talking to Lucky and Mark, we made the decision that this car would be ideal for us to get back to being competitive.”

Russell was indeed ready for the new season and featured in the business end of Supercharged Outlaws at both Nitro Up North in Darwin and the Desert Nationals in Alice Springs. 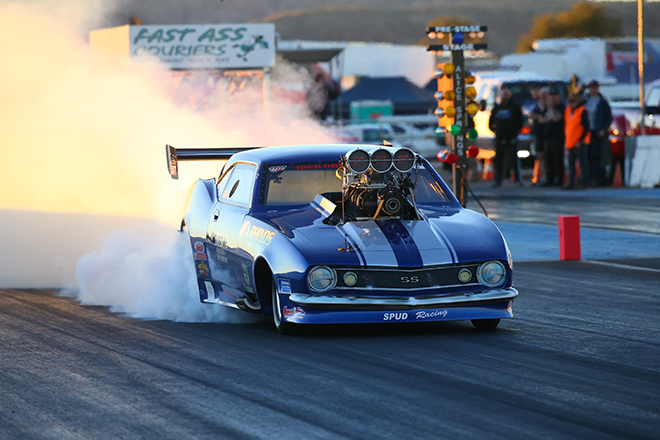 In his first ANDRA Championship event since the incident at the Rowe Memorial sevens months prior, Russell qualified second in Darwin and was eliminated in the semi finals on a break out.

He backed that up with second in qualifying at the Desert Nationals a week later finishing runner up to Mark Hunt in the final.

“I didn’t think about (the comeback) too much, I just focused on the car and getting it ready. I have great support from my sponsors – one even purchased a new helmet for me.

“We qualified two seconds behind Adam Murrihy at Nitro Up North and we were very excited to go to the semi’s in Darwin. A little disappointed for breaking out but the car showed us how consistent it can be.

“Alice Springs was a great feeling for me to go to the finals only losing by 0.63 of a second and qualified second again behind Adam.”

Now very much back in the saddle Russell has big plans for the rest of the season. The next six rounds of the Summit Racing Equipment Sportsman Series are close to home and could set him up for a title challenge at the Grand Final next April.

“It is absolutely fantastic that the next six rounds are relatively close to my home town,” he says.

“I will be taking every opportunity to complete at them. Let’s see how close we can get to the Championship. I couldn’t ask for any more support, I am over the moon to be back and very competitive in the sport.

“I would like to thank all my drag racing friends and amazing sponsors for all their support and also my very understanding wife and family. Thanks to all my loyal supporters including on Facebook @Spudracing.”

The next round of the Summit Racing Equipment Sportsman Series will take place at Mildura Sunset Strip on October 22-23. Keep an eye on www.sunsetstrip.org.au for more information.